Today I had the pleasure of a quick gripback of a bit of a bogey. Last April the first King Eider in Yorkshire for 163 years appeared. Obviously I feared my chance of a county tick had gone. Fortunatly a first winter male appeared at the same location, Breil Nook, on Flamborough Head yesterday and I was able to g 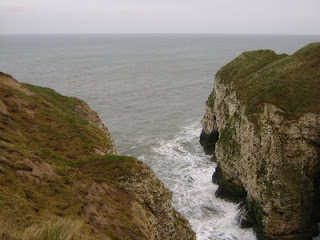 et good views of this between 15.15 and 16.30 this afternoon. It hung about offshore wandering over about half a miles distanceeast west along the head, occasionally joining up with a pair of Common Eider. I grilled the female intently just in case and checked the male for sails (none) or strange bill colouring (bog standard) after reading Frontiers in Birding. The King Eider seemed pretty typical of a first winter with a uniform grey brown colour across the mantle, hindneck and crown with a dirty cream foreneck and breast and a plastacine like orangey-yellow bill without a significant knob. It dived occasionally but mostly steamed about on the surface. Viewing was hampered by a strong breeze but it came in close enough to appreciate its smaller size and build than the common eiders. It wingflapped at the same time as the female Common Eider showing a marginally shorter wing length but considerably narrower wings. Enclosed is a nasty record shot (windy, distant, poor technique, optics, ability etc) and a pic of the location. 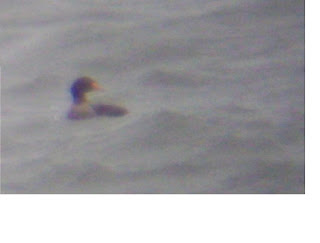