Four Corners of a Kingdom

This may seem a bit random but if you follow me on twitter (@ornid) then you may have noticed that last saturday/sunday I managed to see ie not enter all four of the home countries plus Eire in less than 24 hours.

This 'epic' achievement (I WAS proud) was on the back of a marathon 6 day survey which started at half 5 on friday with Luca picking me up heading to Birkenhead. Here we joined up with Ray and boarded the Prince Madog - a fab boat if ever I saw one. Luxury. We left the Mersey to loads of shite hawks and Anthony Gorley's Another Place - a truely remarkable piece of sculpture and one that I wholeheartedly endorse. Due to admin we were unable to start work until late doors but managed a surprise Black-throated Diver. Finishing after dark (yes really!) our visual survey stayed offshore, ready to take advantage of the early morning moonlight. The bright lights of Prestatyn ket us going.

Saturday started with Bacon on brown with a side order of over 1000 Common Scoter. Impressive although I abjectly failed to find a Surfie or rarer. A touch scarcer though was a Great Northern Diver. This was a post build site so we were surrounded by Cormorants, crap and giant windmills. Interest wained save for Grey Seal and we pushed on to Menai Bridge. Followed by a taxi to Birkenhead, followed by a drive to the Mull of Kintyre. Nice.

Largely uneventful, 10 deer were noted on the small roads of Argyll. Most noticable was the beast of Exmoor reincarnate wandering round the oncoming lane in the middle of Tarbet, at  the head of Loch Lomond. super scary!!

Survey can be largely glossed over as same old same old save for 4 Little Auks  (year tickage) plus a variety of divers. The Little Auks were distant ish but not an adequate grip back for the previous weeks Ross's Gull off the obs. Bah. We did however see Antrim and Donegal

Better views were had over the next few days of Little Auks but the trip total staggered to 8 birds. The Islay site over Monday/Tuesday was dross with 180 birds in 10 hours. SSSSSSSSSSSLLLLLLLLLLOOOOOOOOOOOOOOOWWWWWWWW!!!! Did see a Redwing nearly get drowned after getting caught in our slipstream, although thankfully the collective will of the surveyors proved like wind to the wings and it recovered to fly strongly toward Donegal.

The final avian highlight was a distant Golden Eagle being bombed by a couple of Ravens. 2 small dots and one bigger dot. Good news - apparently Sea Eagles have bred for the first time on Islay. Corking - will have to kee an eye out.

Apart from slow birding it was a nice trip. Could do with sum rare to skor.
Posted by James at 23:33 No comments:

Pied-billed Grebe and some other stuff...

Last weekend myself and the former Uptonite Tim Jones headed across the pennines. This was a perrilous journey, largely because Id forgotten I had the opticians so we were later than expected and then I missed the M62 as Tim regaled tales of Fair Isle. We arrived at Hollingworth Lake at bout 3ish and realised we had a heck of a walk to get the bird. I started to worry about the light and we hot-footed it round the eastern side of the reservoir. As we did this we lookeed for the birders who were miles away.

Bally to you lot is all I can say as the Pied-billed Grebe came to greet us, swimming into the bank a mere 10 feet from where we stood. To say the views were stunning would be to undermine the views. The eye ring was nicely on view, and a surprisingly long-tail. The bird didn't look like a big Little Grebe at all with a very different, less compact jizz and a rocking of its neck whilst it was surfaced. It almost outdid itself however when it bought a biggish perch to the surface and subsequently took 5 minutes swallowing it. It got there but im sure belly-ache ensued as it gave up feeding and drifted off across the lake at which point we drifted back to the car.

That completed my UK grebes and was a nice grip back from the '99 birds. Takes me onto 316 UK (although that could well become 317 with the Collared fly being supported by genetic evidence).

Last week I did a bit of survey work on the saltmarshes of the outer Humber. Standard waders with clouds of Knot, Bar-tailed Godwit, Dunlin and the like, highlights came in the shape of a male Hen Harrier getting the hurry up from a Peregrine that was resting on the flood bank. Thankfully Hen Harriers are still regular in this location and this is the second male I have seen here this year. A bit more raptor interest was provided by a Kestrel hunting for voles and a few Sparrowhawks making forlorn forays onto the mudflats in search of a takeaway. No Twite, Snobs or Laps today.

Lastly my Rough-legged Buzzard surfaced again at Great Kelk - halfway between the original sighting location and my house...garden tick coming??
Posted by James at 10:51 No comments:

Last weekend I went for a quick sojorn to Islay/Kintyre but due to the weather was only able to get the Kintyre survey done. A good journey up was completed quickly and we arrived on Islay in total darkness on saturday. No birds of note on the way up with Buzzard counting being the highlight. Our skipper was in bed early and so as not to wake him we retired to the pub. Our regular haunt was filled with arseholes getting lary so we decided to head for the smaller pub to avoid facial injury.

After some convivial drinks where we all swapped birding stories with our newest recruit, Steve (turns out I saw him being interviewed at the Alder Flycatcher twitch a couple of years ago). A slightly restless night was had but we were on song in the morning as we headed toward Macharihnish (spelling?).


On survey we had a steady day but the highlights were many and varied with female Long-tailed Duck perhaps deserving top billing. Other stars included the return of 25 or so Great Northern Divers including some in the last vestiges of their summer finery plus a couple of Black-throated Divers. Two skeins of geese were noted, both of exactly a dozen. Firstly a group of Pink-feet headed south and later some Greenland white-fronts headed east. All in all very nice. 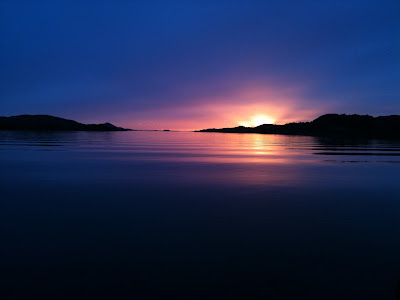 We quickly headed back to the mainland to get away before the storm hit and whilst travelling through West Loch Tarbert had large numbers of Great Northerns and plenty of Red-breasted Merganser and Black Guillemot. A most enjoyable survey!
Posted by James at 17:30 No comments: