Autumn in the Costa Blanca

This trip report has been slow coming to realise itself out of my tiny, addled mind and onto the virtual paper here. In late October I spent a rather warm week in Southern Alicante with my family and as usual I was indulged to get out and about including day trips to see my friend Jess up in Albacete and with the family to Sierra Espuna, Murcia. We arrived from single digit temperatures of Leeds-Bradford to the relative comfort of 22c and by the time we came left it was touching 30c.

My first morning in Spain always starts with a pre-breakfast wander to reacquaint myself with the local birds. I was hoping for a bit of passage and there were some bits and pieces. I started at the cemetery in the Parc Natural de la Mata y Torrevieja. The park is located a few metres from the door but it is massive. I planned on looking for migrants in the plantations but the proliferation of mosquitoes still present meant I changed plans and headed round the edge of the salt pan looking for waders.

I manged to cheer up the local Finnish birder when I found him a Kingfisher but for me it was the hundreds of Black-necked Grebes and the Flamingos which were appealing. Sadly the closest of the latter were all juveniles but in pleasant light it was still great to see up close. The usual suspects were about with Iberian Green Woodpecker, Thekla Lark and Zitting Cisticola. A Marsh Harrier cruised by, checking us out and the largest flock of Stone Curlew I have seen were sat on a spit with a minimum of 38 present. A Mistle Thrush in the cemetery was a good local bird although they breed close by. A single Iberian Grey Shrike was perched up surveying for potential food and the highlight was four Shoveler which dropped in. It was soon time for coffee although not until I had acquired the first of many puncture wounds from the mozzies.

I went looking for herps with Izzy late morning and we found our only snake of the trip, hiding under the step that led into the reserve. It looked like a Smooth snake but had a chequered pattern on the belly which as far as I knew made it a Southern smooth snake. I was however mistaken, it was the mildly venomous, rear-fanged impressionist the Iberian False Smooth Snake. Naturally I held it and got Izzy to feel it - it showed no inclination to bite and there are no records of envenonmation. It had a couple of fake strikes when I annoyed it a bit but we had to move it out from under its hiding place so we didn't crush it. 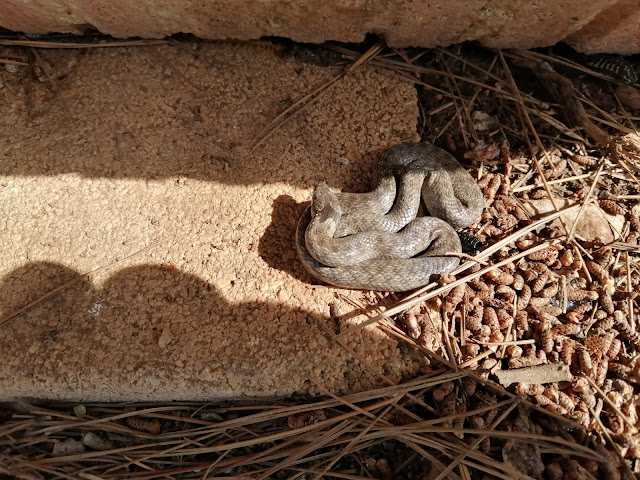 That afternoon we had a ramble round El Clot de Galvany, a small nature reserve 15 miles to the north which has some pleasant bars nearby. This is a small oasis and has a mosaic of habitats. With the plentiful water I was hoping for crakes but all I got on that score were Coots and Moorhens. More interesting were the Crag Martins scuddings about and an Edward's Psammodromus on rocks. I also had my only Red-rumped Swallow of the trip and a few Crested Larks.

On the 28th I was meeting Jess in Albacete in order to get out on to the steppes and catch up with a few more localised birds. Jess works in a school on the outskirts of the city so I had to wait until they kicked out. As it is about 100 miles up there from where I was staying I headed to El Rincon which is the visitor centre for El Hondo which is open daily (it doesnt give the full experience but allows a dabble). Water levels were incredibly low but there were some great birds. A circling Booted Eagle was bettered by a male Hen Harrier messing about over fields. Bluethroats were present throughout. The reintroduction scheme Crested Coots remained loyal to their pool with a few Purple Swamphens. My only Squacco Heron of the trip was sat on the marsh in front of me but as it was a first winter bird it wasnt very obvious (and I am blind / useless). I flushed it and thus only really saw it in flight. Idiot. A number of meadow pipits were foraging around the margins of the marsh and amongst them was a lovely Water Pipit which was only my second in Spain. The margins shimmered with Plain Tigers which are also known as African Monarchs and are in the same genus as the more famous Monarch Butterfly. Numbers were higher than I can ever remember.

In addition to the birds and butterflies I spied a slightly raggedy male Vagrant Emperor. Despite the first records of this nomadic species from Yorkshire this year I had yet to catch up with one anywhere. A few squadrons of Glossy Ibis crossed the marsh as did a small group of Spoonbill which was the first ones I have seen at El Hondo (I have seen them distantly at Santa Pola salinas before). Pretty soon my stomach told me it was time to head onwards and upwards from sea level to about 1000m asl on the plains of Castilla La Mancha.

Once I had acquired Jess we headed for Petrola where we saw some distant flamingoes and not much else although a Iberian Grey Shrike watched us from above. We didnt have much success at a number of pools with Red-crested Pochard and the odd Marsh Harrier the highlights. It was however really good to catch up with Jess. We know each other through ringing at Tophill Low with Graham Scott on his CES site. Jess moved to Spain several years ago as a fluent Spanish speaker and has been teaching in Albacete ever since. We had a rather epic day in Norfolk several years ago featuring a Lesser White-fronted Goose, a Western Sandpiper and a Coues' Arctic Redpoll with support from Shore Larks, Taiga Bean Geese and a rather lovely Chinese Water Deer.

We did eventually manage to find a few troops of Great Bustard to the west of Bonete. Once East of Bonete however things picked up. Whilst looking for Rock Sparrows at Bonete Station a rather lovely male Black Redstart popped up. A few kestrels dotted about and we chewed over the possibility of Lesser which they werent but at this point I noticed some Great Bustards on the far side of the fields. The fields were enormous with 'boundaries' nearly a kilometre away. Despite this the birds gave really nice views and some meandered closer, halving the distance. A smaller brown thing between us and the Great Bustards resolved into a Little Bustard and then two, three and finally 11. Mostly these were hidden in the crop but occasionally they stood up. One even deigned to give us a view of its wing pattern by flapping and this happened to coincide with my efforts to take a record shot with Jess' phone for her.

Light was disappearing fast and we headed up the road to Higuerula. No more bustards were in evidence but we did manage to find a flock of what I presumed were golden plover. Something wasnt quite right as the first had a big supercilium, as did the second and third and we pushed further up to make the most of what was left of the light. The better lighting from this angle revealed what I had suspected, 37 Dotterel. Very definitely a Spanish tick for me! Jess mentioned that they are known for wintering on the plains of the area, not something I realised at all.

A trip to the watchtower at the north of La Mata Salina the following day resulted in zero harriers (hen, marsh and Montagu's roost here at various points of the year), zero snakes and a multitude of Black-necked Grebes with at least 200 seen from the tower. There were probably c1,000 BNG on the Salina throughout the holiday but getting an accurate count on such a large waterbody proved impossible although well into three figures were viewable from any watch point.

A trip to Sierra Espuna was not without its ornithological charms although chiefly this was a family fun outing into the mountains of Murcia. We zigzagged up to vertiginous heights on some very narrow and unprotected roads and amongst the pines were some cracking views which were decorated with Chough, Golden Eagle, Crested Tit, Crag Martin and Raven. Alas there were no snakes or lizards as it was fairly chilly at this altitude but it was all about the views and a ramble to collect some of the largest pine cones I have ever seen. We also came across Ice Houses which in winter were used to collect and keep ice to supply the local area with that rarest of southern Spanish commodities, cold.

The penultimate day of the holiday was largely spent swimming with the kids but a balcony coffee led to some vismig with 25 Song Thrush tumbling out of the sky in small groups after reaching the coast. Chaffinch and Meadow Pipit numbers increased and small parties of Serin bounded past. My only Common Redstart of the holiday was seen off by the resident Black Redstarts and headed into the Stone Pine scrub. I went for a meander around the south-east of the lake again and found the Stone Curlew flock had increased to 70 birds. These hid in the shrubs beside the waters edge and were only discernible if you were looking.

The final full day of the holiday started with a pass and I went to the Vistabella road which flanks El Hondo. I started in an area which allows access and viewing over the western lagoon (El Poniente). Here I kicked up four Green Sandpipers from a damp ditch, swiftly followed by half a dozen Snipe and finally a Jack Snipe. This was one of my finds of the trip and another Spanish lifer. I didnt really realise that these guys made it as far as Spain but this one, typically flushed at close range and flopped down along the ditch. I saw it on a handful of occasions as I moved along without getting great views on the ground. Once I got to my viewpoint the raptors started to emerge with a scattering of Marsh Harriers and single Osprey, Peregrine and Booted Eagle. No clanga eagles were seen but a Red Kite sallied over the sallows and eucalypts. This was a province first. Any kites are rare in Alicante - I have seen a total of three black kites which roosted in the reedbed one morning on migration and disappeared towards the mountains before the sunrise was in full effect (I watched a Red-necked Nightjar and a Montagu's Harrier playing chase at the same time). I moved along the road to where an Osprey was perched up - this is a breeding area for this species which is present year round. I assume it was the same bird I had seen catching fish on the lagoon. As I made my way to the hide I pushed a Bluethroat through the reedcut and managed one crappy photo. 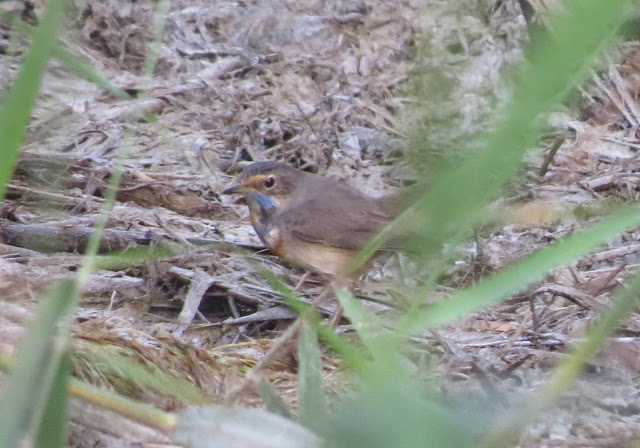 The Osprey sat, looking bored on the post that I saw one on in 2015 at the same time of year. There was little else about and my Spanish birding was drawing to a close for another trip. Below are a few of the other photos that I managed whilst out there. We are currently planning to head to Cadiz province in late August 2020 for our summer holiday when hopefully the raptors are plentiful. I miss Spain already and I can't wait for my first Tarifa experience.