Yesterday I decided to have a ramble round the patch to have a better look at the Twite that have been about and also try and pin down the Lapland Buntings which Trevor Charlton has had a few times. I am rather glad I did! A slightly rubbish seawatch was quickly abandoned after 25 Twite flew south. Obviously I headed north and there were more present in a patch of mugwort. This seems to be their favoured spot. 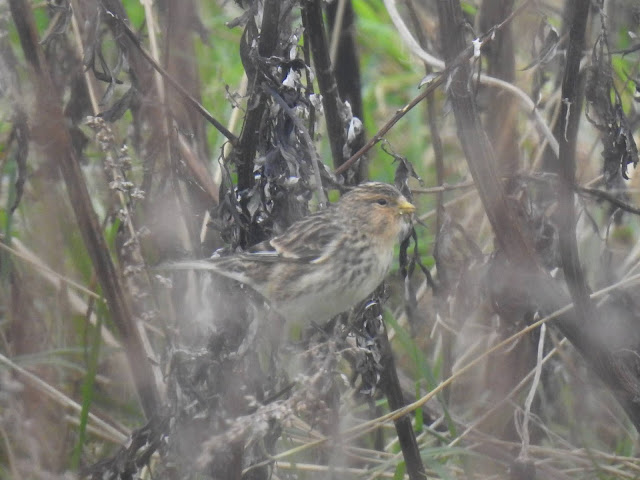 I marched round the perimeter of the marsh, flushing the occasional Snipe when eight Lapland Buntings flew over calling. They moved off to the north-west but the impression was that they had come up out of the stubble. Somewhat surprisingly, these were my first Laps for the patch and patch tick number 184. I continued round the margins of the marsh to the snipe field where half a dozen regular flavoured birds preceded two Jack Snipe in their favoured strip of damp, long grass. Pink-footed Geese started to pour north and just shy of 500 were counted heading into the Wolds. A check of the beach was productive with a nice variety of waders including Grey Plover, Bar-tailed Godwit and Turnstone. 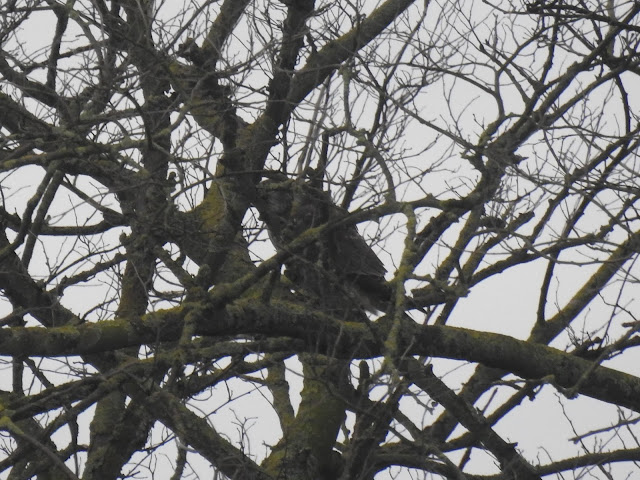 Further south I bumped into a Merlin that was convinced I couldn't see it in a tree. It let me get pretty close before moving into the next hedge and repeating the trick. The hedges had low numbers of birds but a nice selection of thrushes and buntings including five Corn Buntings and a few Fieldfares. At this point I bumped into Lee Johnson. Lee works Barmston fairly often in winter and with autumn pretty much done he had headed over to try and get a bead on the Lapland Buntings. We wandered up the marsh again and a few Lesser Redpoll went over followed by the emergence of 13 Lapland Buntings. They wouldn't show on the ground, flying at well over 100m from us but they flew close, calling repeatedly. An excellent count of a tricky species. These were also Lee's first for the site. A Woodcock flew into the marsh as we wandered back towards our cars and the Twite gave an improved showing back by the camp. All said a very productive morning. 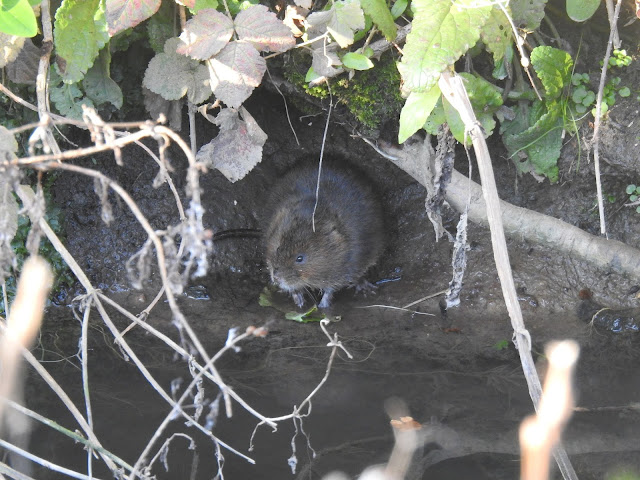 This week I have been trying to overcome general lethargy and feeling a bit miserable by getting out and about a bit more before my working day and again at lunch time. I have been feeling a bit down and demotivated and I know that moving more and doing a bit of wildlife watching, even close to home is a fantastic tonic for the lockdown blues. Somewhere to the south of the village is a Great White Egret which I can't locate but appears to be still present so I will give it another go. On Wednesday however, I was checking for birds along the stream on Spittle Beck Lane when I noticed a medium-sized rodent along the bank. I assumed that it was going to be a Brown Rat Rattus norvegicus so I was a little taken aback when I raised my binoculars only to be met with the more benign features of a Water Vole Arvicola amphibius. 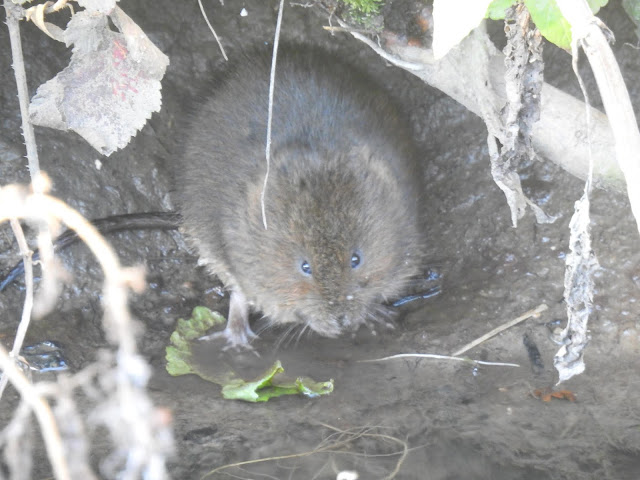 It sat motionless for minutes on end which was great but it was a misty morning and I had neglected to carry my camera with me. I managed a quick record shot with my phone down the right barrel of my phone. The photo, just about recognisable as a Water Vole didn't satiate me and I was back during my lunch break, armed with my camera. I found a different vole, outside another set of burrows, some 30 metres away, turned my camera on and nothing happened. Flat, caput, dead. I raced back home, replaced the battery and returned. No voles were visible although a couple of ripples on the near bank suggested that there were plenty around. I planned on having another go yesterday but alas it was not to be due to a combination of wet weather and overrunning work, so I returned today. 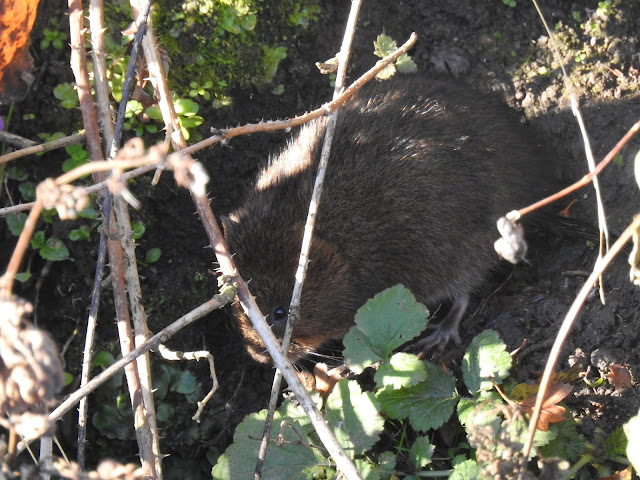 This guy sat out in the sun initially and was nearly impossible to photograph as he was massively overexposed being half in shadow. He slid down his run and groomed by the waters edge for ten minutes or so, barely moving. He (I say he, I have no idea) was aware of my presence but the distance across the small stream seemed to keep him calm. I watched until he decided to drop into the water and head along. Soon after two further plops indicated two voles I had walked past, one under thick vegetation and a second under the near bank. I walked further along the lane but found no more. Walking back my lad was back out, under the vegetation, sat on his liverwort lawn. I kept going, aware that I had 15 minutes left before I should be back on the computer and wanting a brew. I kept an eye on the stream and the usual suspects were making waves in the same places as on the way up when I spied a fourth individual, mid-stream, wrestling with a wind thrown apple. Oblivious to me, he tried in vain to get his prize, failing and shooting before resting in the shallows, having seen me. I rattled off a few shots before he dived and I watched as he zooted five or six feet underwater and up into the bank via a submerged hole. 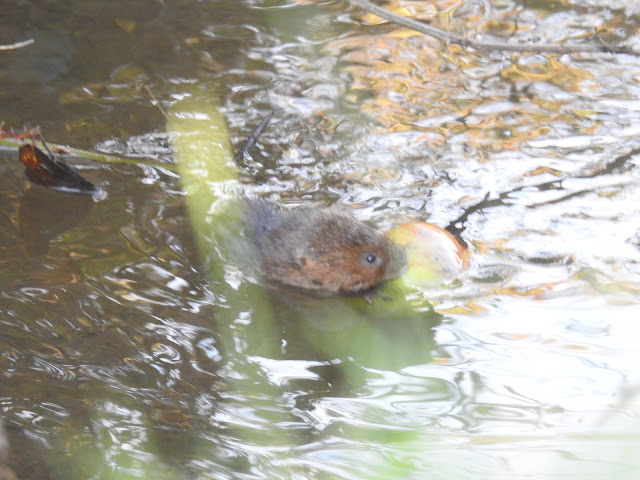 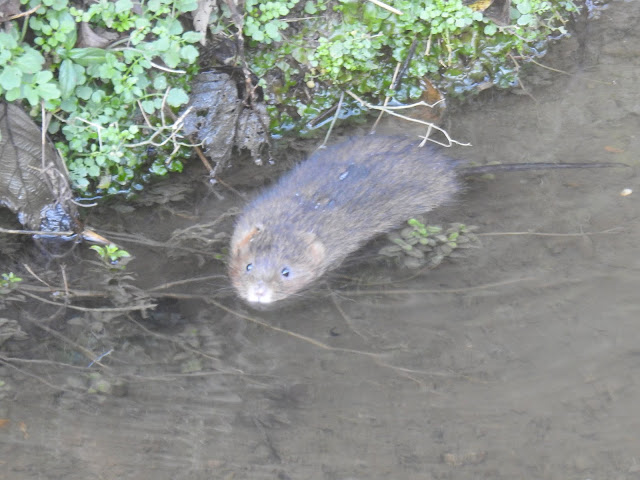 And then I was happy for the rest of the day, safe in the knowledge there will always be a bit of my heart devoted to it.