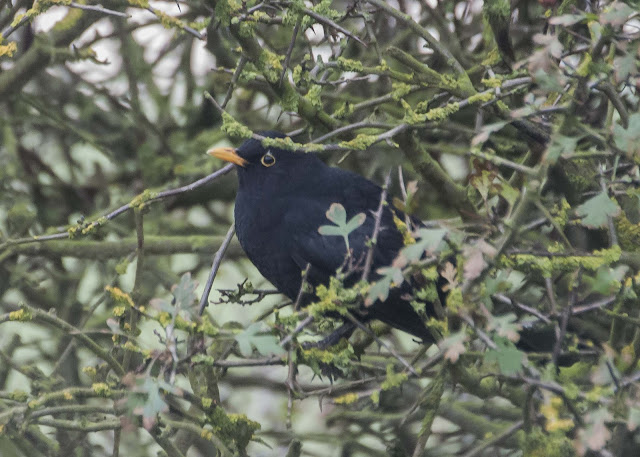 This guy was one of hundreds of Blackbirds that arrived at Barmston on Monday morning along with smaller numbers of Robins, Fieldfares, Redwings, Song & Mistle Thrushes. I also managed to find a phyllosc tastic sycamore stand (sans birds but it was a light SWer). My main aim was to find Little Auk due to decent numbers passing over the weekend. In the end I failed but a couple of brief seawatches interspersed with a bush bash turned up about 200 Common Scoter bombing around the bay, a single Greylag south and 4 Twite south. By far the best bird of the day was a Red-necked Grebe south at 11.30. 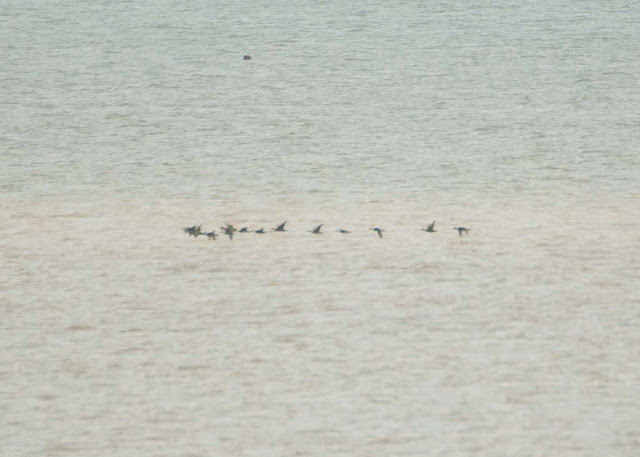 Right now I should be packing as I am away to Spain this afternoon. Spotted Eagles here we come...
Posted by James at 07:17 No comments:

Last week I was working in Cumbria and largely saw the inside of an office during the day but I managed to squeeze half hour birding in the morning and evening in St Bee's.

On arriving for the first time a party of 5 Whooper Swans sailed over head travelling north and calling away as they did. Not long after another group of 21 swans flew south over the sea and were likely of this species.

Tuesday morning provided views of an adult Mediterranean Gull which hung around all week. A few Rock and Meadow Pipits bobbed about as well. The evening walk provided little new but Wednesday morning provided a Peregrine & Sparrowhawk. The evening highlight was an Arctic Skua bombing south whilst Thursday morning gave us further views of the med, small parties of Redwings overhead plus a few Gannets and a Grey Seal. The last meander on Thursday evening provided Linnets and a few passerine migrants in the form of Robins, Blackbirds, 2 Redwing and a Goldcrest.

Tomorrow I am off to Barmston for some Little Auks and Poms (please!) and then it is off to Spain for 10 days. Huzzah!
Posted by James at 08:49 No comments:

No Dick's on the Head

Sadly Isabelle & myself failed in our Richard's Pipit quest late this afternoon after the bird flew inland as we walked up. It was very warm and pleasant and a steady stream of Mipits kept the spirits up but little else of note. Izzy loved it and just spending time with her made it all the more fun. Dip - nah, just a nice walk with my girl. 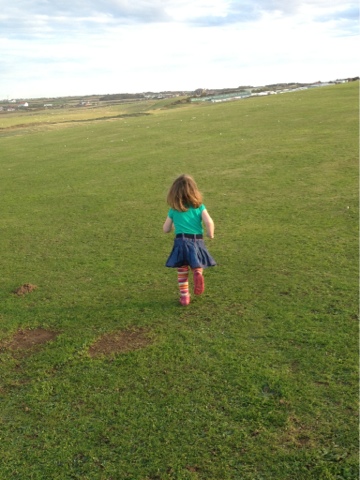 The autumn seems to be hotting up with plenty of American passerines in Ireland and Scilly and a small number of rare mainland Locustellas (in fact a friend found his second Pallas's Grasshopper Warbler on his patch at Whitburn today and they are in addition to one he found on Fair Isle). For me frustration is the key at the moment as inevitably the baby comes between me and ideal birding times. The prosaic nature of the birding largely has led to somewhat prosaic posts on here. I apologise - I guess this is my annual, must do better post. I will redouble my efforts to make this a worthwhile blog to read and thus the injection of pace referred to in the title will include my postings.

In order to keep your mind vital I am posting links to some blogs with prose that is a bit, well, springier. First up is my ornithological mentor and friend, Graham Scott, a lecturer at the University of Hull. He is a geek like myself but importantly he writes nice flowery rubbish that draws you in. This I imagine helps with the teaching side of things. His blog, Bioedstuff is a jamboree of his interests which include natural history, ringing, birding and sloe gin as well as the unsurprising bio-education. He has a keen eye for interesting animal behaviours as does the second blog I am linking to by Africa Gomez - Bugblog. This beautifully presented blog looks at the natural history of the back garden bugs and especially their behaviours. Watch out for the white bowl treatment as well. It renders excellent results!

If I manage to escape the clutches of Casa Spencer over the weekend then I will ensure that I marry up crap stories and crap images in a new and entertaining manner. Or try and put words in the title that will at least draw some hits ;).
Posted by James at 16:24 2 comments:

On Tuesday I gave Flamborough Head a thorough thrashing but as it has taken me 2 days to get around to blogging about it I'm sure you can draw from that it wasnt an epic success. Indeed migration seemed to be none existant largely until late knockings. The weather was fine and sunny with a light northerly breeze, not exactly ideal conditions for grounding scarce migrants but I decided to go ahead anyway - it only takes one bird to brighten the day up after all.

First up I was at Holmes Gut, the ravine between Thornwick Bay & North Landing. Here I bumped into the local ringers who gave me the news that quiet wasnt quite the word for it. I carried on cheery as you like but inside I died a little. Until that point the non-logical part of me continued to hope there was to be a scattering of migrants drifted south from rare covered Shetland. At the time what seemed like pretty lean pickings on reflection seems quite reasonable. 1 Goldcrest, 1 Blackcap & 2 Stonechats. Rather frustratingly as the ringers drove a hedge to catch a couple of Robins a long, warm warbler shot into the bottom of the next ditch. Very acro-esque and probably a Reed Warbler but I had ammo to allow me to string in my head all day... 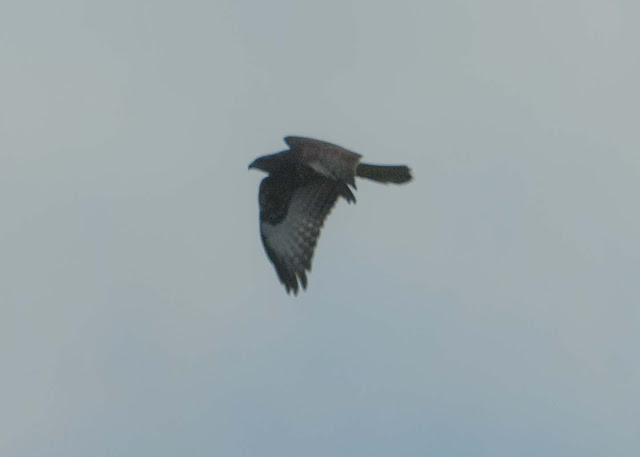 I bid farewell to the ringers as the continued with their lean pickings. Next I went to old fall. In 2 hours I managed 3 Goldcrests, 1 Willow Warbler & 4 Swallows. Rubbish. That took in the hedge, the plantation, the gullys, the gorse field, the motorway, headland gardens, bay brambles, bay willows and all the way back to old fall steps. Apparently I missed a Lesser Whitethroat. This does not upset me.

My final destination was to be South Landing. Here it all seemed a bit more promising when a roving tit flock held 3 Goldcrests and a juvenile Common Buzzard was flushed by the local maggies. All quiet for the next hour but as I got to the bottom of the ravine a few thrushes were about including 4 Redwing. And that was it. No scarce, hardly any common. It was all pretty quiet. Originally I had planned to do something similar yesterday but instead I went for a wander round the village and found 2 Snipe in a stubble field next to a flash.
Posted by James at 10:25 No comments:

This Week I have Been Mostly...

...finding Sabine's Gulls. My third and fourth of the autumn were at an undisclosed place in the North Sea and were both seen briefly. Despite this we got enough on the first to get it to first winter and somehow a colleague got photos even though he didnt see the bird! I cant post these as they arent mine to do so but you can have a couple of Little Gulls instead. Hopefully Im going to get out on Wednesday for a few hours (and the wind looks reasonable for Flamborough) so there will be more updates. Perhaps. 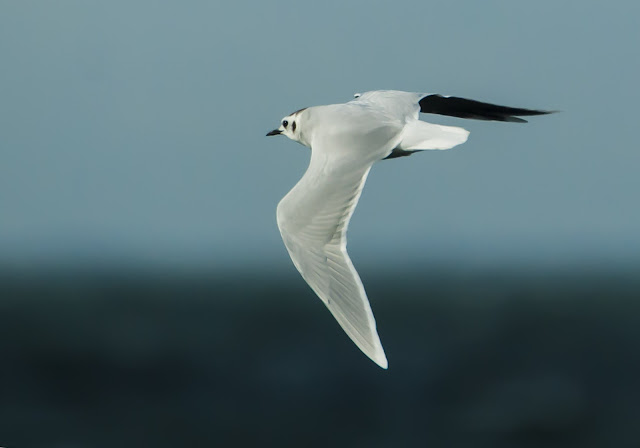 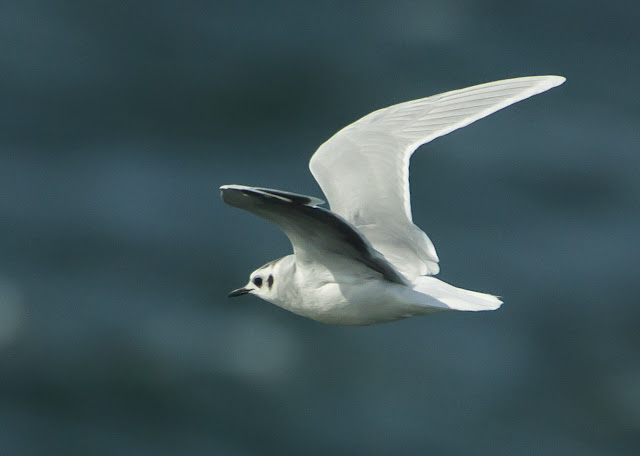