Im now home and hosed after 8 days on the road thankfully although some chavvy scumbag has smashed my windscreen and dented half the panels on my car, the bastards...

Yesterday we had a short area left to survey and bar a few Manx Shearwaters and Puffins there was nil of note until the last two minutes when a Whooper Swan flew north high and there was a significant passage of Swallows. A swallow then went the other way..no a white rump, Storm Petrel! One of my bogeys cleaned up! Rather bizarrely a House Martin was in with the Swallows so we had a chance to compare the two at sea.

As we headed home we saw very little bar a circling Golden Eagle over the cliffs of the Oa. This bad boy was a subadult shown by the white band in its tail. It indulged in a bit of foot dragging and tumbling before disappearing - superb views.

From Port Askaig waiting for the ferry we had a Goosander fly east high, a good record for the island. The journey back on the ferry had about 20 Great Northern Diver plus 3 Red-throated Diver all in spanking summer plumage. Magic. Onward!
Posted by James at 10:34 No comments:

Ive been away for the last six days and I have had some mega birds and marine mammals. Travelling up we managed 3 Ospreys in the Spey Valley and a Goshawk. Up on the moray firth we managed 120 Bonxies, 10 Arctic Skuas and a few Arctic Terns as well as a single Minke Whale and some incredible aggregations of Kittiwakes and 24 Great Northern Divers off of Buckie. We then traversed Scotland toward Islay with a couple of stops in Speyside including Grantown Woods where Crossbills were overhead (seemingly big ones) plus plenty of Siskins, Mistle Thrush, Redstart, Tree Pipit and a Cuckoo, the latter three all year ticks.

A quick detour to Loch Garten saw some lovely Red Squirrels, Common Sandpiper, Osprey around the nest and best of all a corking Capercaillie feeding on saplings! No photos but magic. We then crossed over the highlands to reach Islay via Fort William, Oban and Kintyre.

Yesterday we toured Islay and saw plenty of proper Rock Doves all over. A morning trip on the Oa saw Whinchat join the yearlist plus a few sightings of Ravens. We walked up to the American Monument to commerate the dead sailors washed ashore in 1918 after being torpedoed. A large passage of Swallows was going on and a few House Martins joined them as they flew ashore in force 6 winds off the Irish Sea. We then explored Bowmore and Port Charlotte before the boss went to pick up the rest of our team. Myself and another colleague shot across the sound of Islay to visit Jura and got point blank views of Red Deer (photos to follow). Once we returned we headed up to Loch Gruinart.

Almost immediately upon arriving I heard 'crex crex' and was fortunate to get brilliant views of a Corncrake, my best of this elusive rail showing clear as day. Immense. A trip to the hide gave up Whooper Swan and Greenshank amongst other bits and pieces but a calidrid kicking around with the Dunlin was just a big indvidual rather than the recent pec sand. We pushed off very happy.

Today was a quiet survey but for the pod of 12 Bottle-nosed Dolphins that were bow-riding the boat for 5 minutes. Bad pics to follow although I could have touched them. Incredible. These guys had a small calf with them and were well marked with pale flanks and an obvious cape.

Just a super few days...now for some small skuas tomorrow.
Posted by James at 16:43 2 comments:

Thanks to a text from a friend I heard about an Iberian Chiffchaff at Potteric Carr before checking birdguides. I was without portfolio as Im surveying this weekend so off I toddled with my baby girl in tow. We arrived and she had shit all over her car seat...everywhere. I tidied her up and fed her and we got onto the reserve an hour after we arrived.

We got down to the field at the south end of Huxter Wells marsh eventually and we could hear the bird calling away, chiffer like but totally different melody with a trill to finish. It didnt stop calling at any point I was there but wasnt showing to start with. It was hiding up alongside the motorway for 20 minutes before slipping quietly into a solitary tree where it showed quite nicely I managed to get good views of a scruffy phyllosc, midbrown with some colour to the throat, not much super and little in the way of green in the wing. Again like a chiffer but not... It came down into the hawthorn right infront and then I noticed... Izzy had puked all over herself and that was that. A good bird with a lovely song but completely different to the pratincole yesterday which had such obvious charms... As we were leaving a ************ called - nice.

Oh and then I dipped the Red-rumped Swallow at Rother Valley... Hate em. El Viva Espana.
Posted by James at 21:45 No comments:

I somehow found myself at Frampton Marsh this afternoon. In an unusual turn of events Mike Richardson was also there. Probably because we went together. We had a wander toward east hide and had a flyover Whimbrel. Avocets were everywhere. A slice of the med was present in a showy singing Corn Bunting beside the path. After a wrong turn to dudesville we got amazing views of a cold miserable ORIENTAL PRATINCOLE. It was drizzling and cloudy. We were cold. The bird looked rubbish. Then somebody calls a Montagu's Harrier over the flood bank and we get a decent view of a initially distant ringtail floating closer until it disappeared below the bank. A quality yeartick and fluke. And then without noticing its warm and sunny and the pratincole is flying like a giant butterfly across the marsh. No trailing edge, scarlet underwings and projecting toes beyond the tail with dark upperwings. The bird then moved toward the far end of the marsh so we moved along the path. It flew to the near edge of the marsh so we joked about checking the nostril shape before it flew straight at us and landed about 8 metres away. THE MOST AMAZING VIEWS. I smiled a lot as we returned to Yorkshire.
Posted by James at 19:35 3 comments: 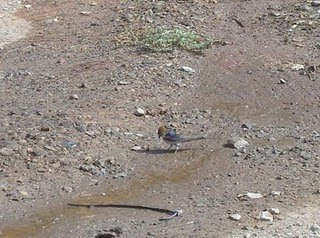 Here are some better efforts from Michael Flowers of the Whisby Nightingales. Visit Michael's blog at http://www.eybirdwatching.blogspot.com/ for the latest on the wildlife classes that he runs. 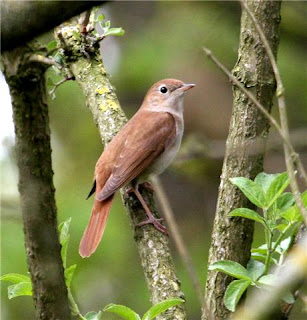 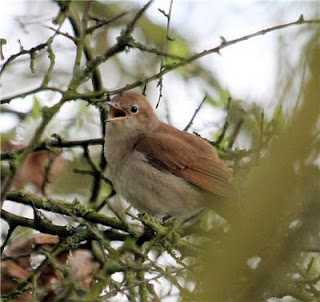 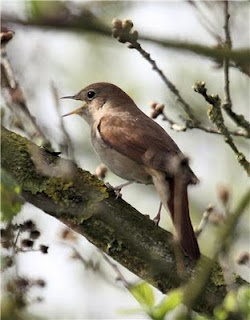 Im a tired bunny at present. The alarm was set for 3.45 and I was on site in North Lincs by 4.55. The dawn chorus was plesent but a little limited...best bits were a Garden Warbler, Whitethroat, Yellow Wagtail and a couple of Reed Warblers. The rest was pretty pants although I found possible breeding Buzzards with them mewing over a wood. News of the Red-rumpers in Hull & Rotherham were galling (especially as I dipped the Rother bird the other day). No Avocets were noticed on the pools with a paltry 64 Black-tailed Godwits in the roost. The low to high tide WeBs was crap with the highlight being the Blackwits decamping mid tide leaving one hanging on all morning. A quick nip into immingham got me the WORST Bacon Sarnie/Coffee combo in the world. Mud flavour and leather texture. Ming ming ming.

After the survey I decided to head to Whisby to try and catch up with Nightingale as I missed the BF meet last month. I wasnt hopeful as it was mid afternoon. I jammed in on the first lake on 3 Arctic Terns which had cleared off by the time I returned leaving only the resident Common Terns. Warblers were dripping from every bush...first up my first views this year of Garden Warbler plus awesome views of Blackcap, Willow Warbler, Chiffchaff & Whitethroat but no Nightingale. There were no Turtle Doves at the crossing and a lack of Hobbies whilst skywatching but I managed all THREE species of hirundine plus Swifts and 2 Buzzards. I had walked every path and was pissed off despite two year ticks. 1 hour 50 minutes had passed. I had ten minutes. A loop path had a Song Thrush singing from undergrowth and looked promising. Fuck it lets cut to the chase -I was mega fucked off and then 2 minutes before I left from under my feet JUB-JUB-JUB and then it showed like a porn star. Nightingale. I even tried to digibin it with my mobile phone. Absolute failure but it illustrates how well this baby was showing until it pushed off to the floor where barely visible it sang its heart out. A well overdue lifer after the 5 second view at flamboro a couple of springs ago. The LRP after could go swing for my money.

Unfortunatly there is a postscript - I just had a doctors appointment and it looks likely that I have torn the cartillage in my shoulder and I may need an operation. Booooo!
Posted by James at 18:59 No comments: 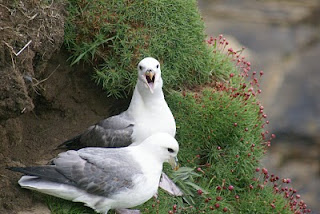 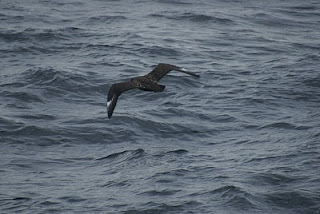 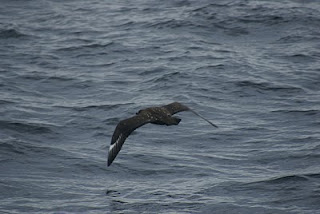 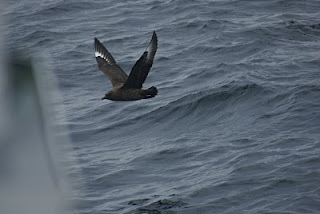 Unedited pirates from the firth plus some uber cute nesting Fulmar from Wick.
Posted by James at 12:11 1 comment: 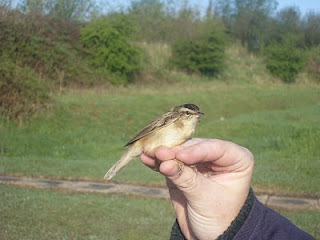 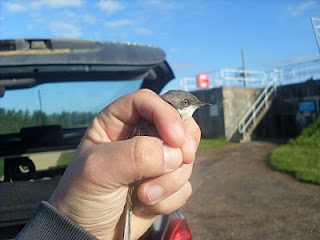 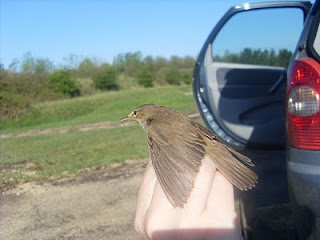 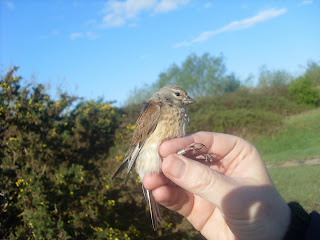 Spent the morning at Tophill ringing today. Several yearticks including in hand Blackcap , Lesser Whitethroat and Sedge Warbler. Also Common Sandpiper on the reservoir walls which I *ahem* mis-id'd as Yellow Wagtail. I did redeem myself with a flyover later... We had a bucketful of Swifts and a Ringed Plover overhead. As I arrived I also managed a couple of real Yellow Wagtails and a Barn Owl from south scrub.
Posted by James at 21:29 No comments: