The second day of my Scots fling was the one i'd been dreading as I'd been told many times about how hard Can bahn mor is to climb. Its not! It was tiring and cloudy but me and Marcus made a slow and steady trip up to one of the shorter munro's interspersed with loads of shortbread action and very few birds.

Prior to heading up we were some of the first out on the roads and got a few good spots in the process. A few Red Deer alongside the roads looking massive compared to the Roe's im used to here in sunny east yorkshire. A couple of Peregrines worked the ridges and an Osprey flew overhead. It took us about 3 hours to ascend the mountain which is an hour more than really necessary but we werent killing ourselves. When up there we searched and searched but the cloud base was in low. We couldn't see a thing. All of a sudden it lifts and a quick phone call to Dan Pointon (twitcher extraordinaire) soo had us looking in the right direction beyond the cairn. Quickly I got onto one, no two, no three Ptarmigan (which now has to be said patarmigan thanks to the bloke from abernethy forest who looked like the scabby guy from Something about Mary but with a brummy accent).

The three birds sat and posed nicely not remotely disturbed moving to within 15 feet or so of us and hunkering down in the wind. Marcus wasn't happy though - the cloud may have lifted but the light was still too crap for pictures. We pressed on another couple of hundred yards and the sun burst through like a neon t 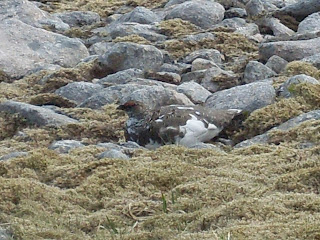 orch. A scotsman in the car park had said as we started it was good for the soul and we knew what he mean't (but not what he'd eaten, he got up a good hour quicker than us and was retired. Bastard). The view was spectacular with the 4 highest mountains in the British Isles viewable. As we made our way back Marcus tripped over another showy group of 3 Patarmigan. Now these buggers would have sat on your lap and enclosed is a picture I took on a compact digital camera and no cropping or optical assistance. Whilst not the best shot you'll see, you can appreciate how close we were (without spooking them - ive heard about those guys that chase rarities to death and can assure you that when they flinched so did we, was just we had to move back to focus our cameras).

After giving these beauts a good slice of our time we pressed on back to the main path having given up on our other targ...hang fire whats that mewing like call? Well i'll tell thee, it was only a ruddy female Dotterel legging about like a crazy. She had obviously dropped in within the half hour we'd been past this point and after Marcus got a few snaps she bugged out quick as a flash. Enclosed Dotterel pic is by Marcus C 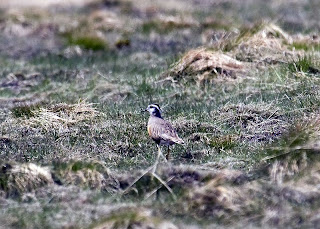 We descended to the tune of Mipits and Tripits (fuck you those who dont like abbrevs.) plus the nasty thin song of Wheatears. Pah! They still look good though. Once back at the car we departed and Marcus did his usual trick of winding the window down so he could hear the song whilst I battled to get the radio on full blast. Im glad he won this time as he managed to pick out a couple of Wood Warblers when we passed the entrance to Loch an Eilein. We stopped and they duly showed tres badly. Not to worry, there only flash Willow Warblers with a cool song really. Doh.


Upon returning to Boat we tried the flashes leading in for some Sum Plum Slav action. Nothing. Then Loch Vaa which i 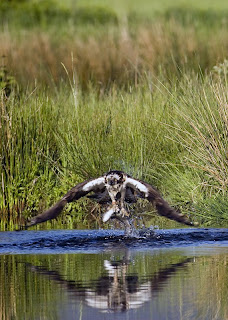 s supposed to be a goer. Still nada (apparently the water level is too high at Loch Vaa at the mo with no sedges exposed for nesting. Another lochan which we thought likely looking had a bloke with a big lense attached to it and we duly scored righteously with a brighlty coloured Slav hauling a lily pad into the sedges (breeding perhaps?).

The final stop of our day was at the Rothismurcus fish farm of Springwatch fame. A quick bit of bartering gained me free access and Marcus in for not too much to the Springwatch hide (yup its tres good!) and before we could reach it an Osprey had appeared above. Bearing in mind that Marcus hadn't had time to sit down I think his images are pretty good. Alas it was the only Osprey to come in that evening (and Marcus' other attempt was even bleaker). We headed home for a few jars and some Pro Evo action.
Posted by James at 16:35 No comments: 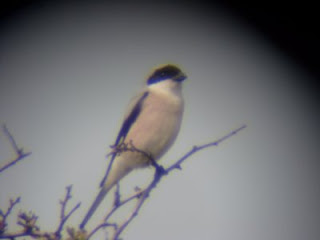 When we got to our cottage we dumped our stuff and full of enthusiasm went for a wander into the local woods. We heard Crested Tit and talked about Capercaillie but nothing was doing. In the end we had some crossbills which it seems likely that they were Scottish but we had nothing to compare them with and left them in the pending category. It went dark at 11pm. Thats quite late!
Posted by James at 12:23 No comments:

Starlings seen today, possibly 50 or so. Number with any trace of pink. Zero.
Posted by James at 18:09 No comments:

Gonna try for an adult pink stink on my commute home tommorrow. If successful, will try and get some shots. Its a big detour for me. 200 metres. Going to Scotland on Saturday to try for the Scots specialities with Marcus Conway. Will hopefully be able to loan some shots from Marcus for the blog (please let me :) ). Just heard that the A66 is closed to cars on my way up. Dammit! Fingers crossed the Lesser Grey Shrike in Northumbs.
Posted by James at 01:04 No comments: