Spring is well underway and I have been merrily ticking away for my PSL list. Since the beginning of April the new species have been coming with a fair regularity with a total of 18 new additions to take me on to 1096, a mere 11 species ahead of 'arch nemesis' Pete Mella. In all seriousness, its been a magnificent effort by Pete to catch up over the last six months and no doubt he will surpass my score soon, never to look back!

From the 18 species there is a single fungal pathogen, the Groundsel Rust, Puccinia lagenophorae. This I found quite widely but it was noted in Wansford whilst birding. Moving my bird table in the garden revealed two new species of woodlouse, both very common but Common Pygmy Woodlouse, Trichoniscus pusillus was a treat as it was pretty small. Common Rough Woodlouse, Porcellio scaber is definitely something I have overlooked in the past.

There was a single Hemipteran, Empoasca vitis or Smaller Green Leafhopper, is something I have certainly seen and noticed before but a recently acquired clip on macro lens for the phone allowed it to be identified. This was on my roses in the garden, a source of plenty of invertebrate frustration and observation. Two dipterans were in quite different stages of their lives with a leaf mine of Holly Leaf Miner, Phytomyzaq ilicis seen in Cumbria whilst an adult hoverfly Eupeodes luniger was in the garden. A Syrphus sp. photographed well but not perfectly wasn't torvus and didn't look like ribesii but an ID couldnt be found due to slightly fuzzy back legs.

There were three final insects this month with two Coleoptera and an Ant. The beetles, 24-spot Ladybird, Subcoccinella vigintiquatuorpunctata and Hawthorn Leaf Beetle, Lochmaea crategi were both noted at a site in Cumbria. A trip to Wharram Quarry revealed tons of Yellow Meadow Ant Lasius flavus under the various stones.
Posted by James at 18:45 No comments:

I've had a few opportunities over the last few weeks to get to Barmston and Ulrome for some Patchwork. Rather annoyingly I havent quite reached the ton in terms of points but I have added a good few migrants including the odd wintering species which had previously escaped my notice.

I am now up to 84 species and 97 points which is one point off last years effort at this time. Saturday 16th April was my morning off the swimming run and I made hay by heading to Barmston. There was very limited movement but a wander got me a pair of Tufted Ducks. A surprise chance to hit the patch up on my birthday (19th April fact fans) saw my first proper migrants on patch with Swallow, Sand Martin and Sandwich Tern all recorded. Grey Heron was also new for the year with a bird rowing north offshore. A brace of Teal were on the sea, as were three Shelduck and two Shag.

A brief after work visit on Friday 22nd April wasn't overly productive with unfavourable winds but a much wanted patch tick was recorded as a male Marsh Harrier passed through North. Some extended effort on Saturday morning say two Barnacle Geese fly north along with two Whimbrel later on. There were also two Whitethroats back on territory at Barmston.

At Nafferton a few walks and general buffonery have yielded my first village Lesser Whitethroats including one in my garden. No sign yet of the Kingfishers but the Little Egrets are still about. Rather frustratingly I found out that one of the Great White Egrets that visited Kelk and Lowthorpe over the winter was present for a week in January in the village. Gah! It even sat in the field 200m from my house. Blackcaps, Chiffchaffs and Willow Warblers have been typically gleaning and nectaring from the Blackthorn blossom in the garden. A wander down Nafferton Carrs brought me to the old Mill Pond in Wansford and here there was a good selection of wildfowl including 8 Wigeon and 5 Gadwall. At least 8 Lapwing and a brace of Oystercatchers were also noted on the floods looking like breeders.

Finally I undertook the Heronry census for the Foston - Wansford Heronry a couple of weeks ago with 18 pairs present on apparently occupied nests. The sub-group away from the main colony has gone by the wayside with the trees falling over the winter.

In big and bold lettering. Raptors galore. I had a week in Ross and Cromarty monitoring Schedule 1 birds on a project and myself and a colleague were undertaking occupancy checks on Red Kite and Osprey territories which was awesome. Im back up there next week and cant wait to see how the birds have progressed. We had a number of Kite territories and several Ospreys including one eating a huge Plaice next to its nest, fresh after arriving.

We also managed a single Goshawk and Peregrine, both no doubt close to breeding sites. A mix of weather with strong thermals and lots of heavy showers meant birds were very active in between. My first Sand Martin and Wheatear of the year were spotted whilst trogging round a moor not seeing Black Grouse. 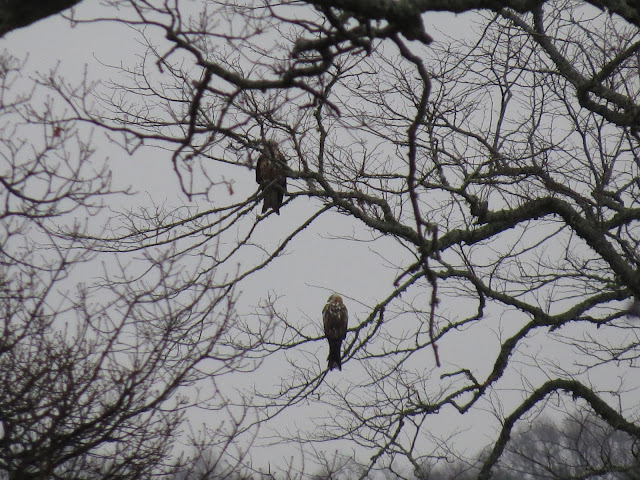 On the way home we decided to have a swing up Strathdearn (or the Findhorn Valley if you prefer), Initially very quiet, all changed when a Peregrine was chasing a pair of Merlin. The Merlins were a male and female whilst the Peregrine was an adult male. All the birds were soon lost in the sky and the morning was marked by a passage of over 1,000 Pink-footed Geese north along with a quartet of Whooper Swans. Despite the wildfowl and the ever present Red Deer, it was the raptors we were here for and again a Peregrine came off the cliff face but it was grey - a young female and she was joined by the adult male who proceeded to assault her. Soon he was joined by a very large adult female who succeeded in chasing the young bird away for a bit.

No sooner had the falcons got going than the Buzzards and Ravens started appearing over the various escarpments. We started getting our hopes up and before you could say Jack Robinson a first winter Golden Eagle starts to try and force the stags over an edge. Soon joined by a Raven who tried to pull his tail feathers we got amazing views as the Eagle circled 100m above us as a skein of Geese flew nervously overhead. 90 minutes of excitement proved too much as we faced the 7 hours home (and on to the Football Ramble live show in Newcastle for me). As we were leaving two large raptors flew briskly over the hills and a jump and scope revealed two sub-adult White-tailed Eagles heading out of the valley, seemingly on a mission. Both birds had cream heads but mostly dark tails and juvenile mantles.

No Flies On Me

Spring got underway with vengeance this week as I took a week off. Three visits to the patch saw a few additions but mostly fairly standard stuff. New peak counts of Great Black-backed Gulls and Gannets hardly alleviated the standard but it was great to get stuck in. At Barmston I am currently on 75 species and 85 points which is the highest score at this stage since 2013. Additions included Teal, Canada Goose, Coal Tit, Sparrowhawk, Buzzard, Lesser Black-backed Gull and a brace of Shelduck north. The Shelduck were the 9th patch record whilst the Canada Geese were a second patch record. madness.

Yesterday I took the girls to South Landing ostensibly to do some rock-pooling although the tide was a little high to actually get anything done. We pratted about on the beach and in the woods where they played Jake and the Neverland Pirates as I looked for inverts and flowers. My first Red Campion of the year and plenty of Alexanders which were plastered in blowflies. I managed a couple of lifers with a hoverfly, Syrphus torvus, which was identified by its eye hairs! and a greenbottle mimic, Eudasyphora cyanella with its stripey thorax.

We went to Bempton for the annual, show the girls the Puffins trip, which was very successful as Isabelle demonstrated she could use binoculars and we saw all the nesting species including great views of loads of Puffins. All round a lovely day.