On Monday after work Neil Rowntree, Pete Clark and myself had a ramble round the Somerset levels. It was mostly the usual stuff with Glossy Ibis, Great White Egret and a few Marsh Harriers the highlights. Try as we might we couldn't winkle out any Bitterns and we ambled back towards the car at Ham Wall RSPB. There was an obvious egret roost on the southern boundary of the reserve and I suggested we scope it for Cattle Egrets. Remarkably all the birds I could make out were Cattle Egrets - about 15. We moved along to the bridge over the drain near the car park for a better angle and tried again. This time we came up with 28 Cattle Egrets, 1 Great White Egret and 1 Little Egret amongst the Cormorants. As the light left, Pete saw the Glossy Ibis fly over towards Shapwick Heath.

A few emails and messages and it became apparent that this was the highest single count for Somerset. I wasn't convinced that we had done a great job of counting them due to our surprise at finding the roost so we went back the next evening without Pete. A single bird came into roost at about 18:15 and a few minutes later a flock of 27 Cattle Egrets came in. 28 then, perhaps we were correct the first time round. The egrets started to drop out of the trees into lower vegetation out of sight and the light was dropping when four more flew in - 32 Cattle Egrets! The Glossy Ibis then shot over and the light left. By 18:45 it was nearly dark and the only egrets remaining on view were 2 Great Whites and a Little. Time for off then.
Posted by James at 16:43 No comments:

I have been beetling about seeing a few bits and pieces but largely failing to summon the prerequisite levels of enthusiasm to blog about it but thankfully a couple of days ago a blimmin' rare bird managed to chivy me along. The first Scops Owl in North-east England for a century, a British tick and my first sight record since 2005 when I was on Kos. It decided to pitch up just outside Sunderland and conveniently was on the way back to work from a dawn bat survey so I was one of the first on site, arriving an hour after news broke. Along with Northumberland Explorer Neil we first found the bindweed markers on the bush before resolving a small brown owl shape. It wasn't completely asleep and it morphed from a spherical fluff ball to the devil horned menace that is typically seen. Thankfully it was in a pretty secure roost and it showed well for all and sundry for a couple of days. A superb find by Tom Middleton and one that brightened my day.

At St Mary's Island, a couple of recent visits have revealed four Yellow-browed Warblers and a Reed Warbler but sadly not much else despite plenty of effort. 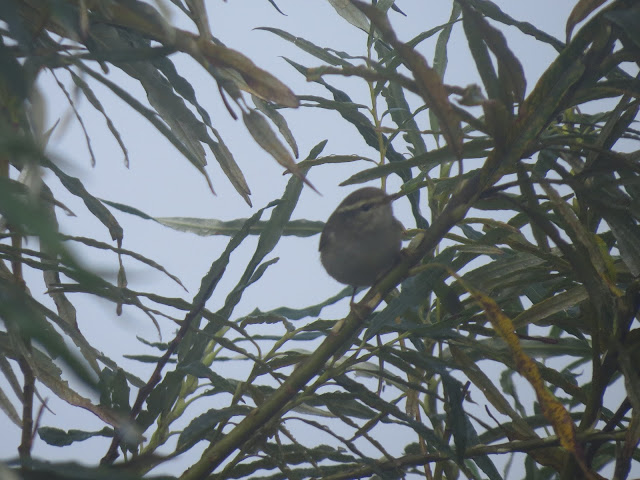 At Flamborough I have had a little success adding largely expected migrants with Whinchat, Redstart, Redwing, Lesser Redpoll and a couple of Yellow-browed Warblers being seen recently. Seawatching has revealed a Pomarine Skua and lots of Sooty Shearwaters but I managed to virtually miss a Sabine's Gull where I only saw its back end and as such I'm not counting it for PWC. Thankfully my plans to go to Scilly in late October look like they may bear fruit so I am looking forward to some yanks.
Posted by James at 13:24 No comments: