Yesterday I finished my monthly low-tide counts with a sojourn to the south bank of the Humber. It was scorchio with 23 degrees registering on my car thermometer. A mid afternoon start at Barrow Haven saw 3 Chiffchaff to greet me from the car door. These were the first of 18 that I noted across the couple of hours that I was out. A sprinkling of Lapwing were notable as were a few pairs of Shelduck. Little was on any of the lagoons behind the bank but on heading back after finishing up a Short-eared Owl appeared hunting the thin strip of saltmarsh. I watched the owl for about ten minutes as I wandered up the floodbank. I have seen SEOs hunting in the day but never in bright, strong sun before. Certainly a pleasant surprise.


The second survey at Barton was a little more mundane with tonnes of Black-headed, Common, Herring and Lesser Black-backed Gulls. Little else was seen on the mudflat but I was serenaded by more Chiffchaf plus the odd Bullfinch and Reed Bunting. I thought I heard a sub-singing Cetti's Warbler briefly at one point but it could equally have been a Wren in the reeds, so brief was the snatch of song. I was getting hot and tired when I noticed a decent group of Aythya ducks on a water skiing pit. 4 or 5 pairs of Pochard were farting about in the reeds to hold my attention when two bigger ducks surfaced. A 1st winter drake Scaup and an adult female. These birds weren't particularly playing ball but patience yielded decent enough views. Happy days. And that was it... Im ringing on Saturday so hopefully I can get a few decent photos and see some migrants. 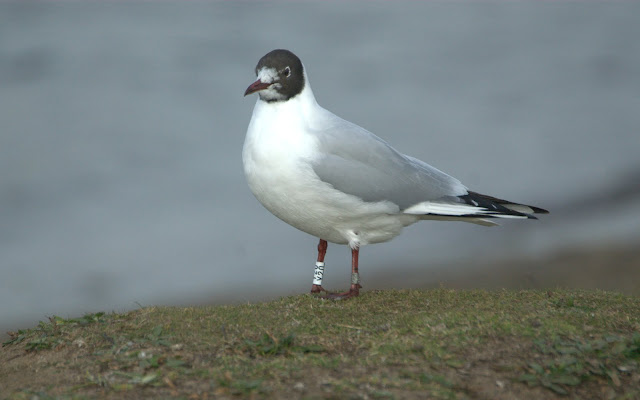 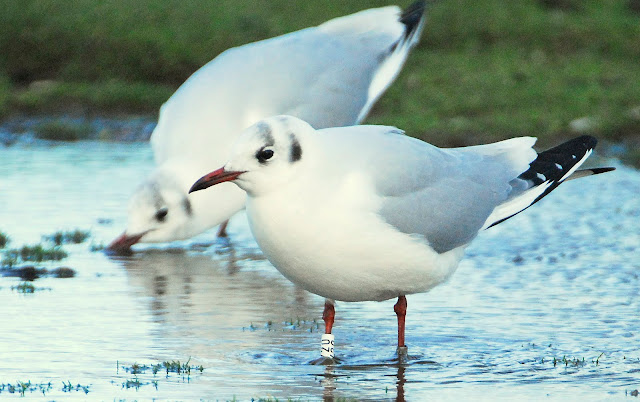 Finally, finally I caught up with one of the many Iceland Gulls that have invaded the UK this winter. It was pounding with rain so following local gen I sacrificed a golden nugget and scoped the beauty from the covered multi-storey car opposite the fish market in the locale where the gulls had been loafing. I was stuck in port due to weather and was damned if I was staying put. I got some nice views of the bird, an adult, flying around the harbour and briefly alighted on the fish market roof. It is a streaky headed individual - not something I readily associated with Iceland Gulls. When I arrived all the birds were facing the car park and not showing the primary tips yet the common gull esque bill was easy to pick amongst the more brutish Herring and Great Black-backed Gulls. At sea we had little of interest although I did get offshore ticks in Gadwall, Pintail and Black-tailed Godwit.