Apologies for the relative radio silence recently. The primary reason has been the computer had an epi-fit and decided it only wanted to be able to use the characters on the keyboard that arent in my password. Useful... Today it finally succombed to the airing cupboard treatment and decided that spring was worth enjoying at home and not at PC World or other some such. The other reasons for my lack of posting has been I am mega busy with work and so things like Baikal Teal, Iberian Chiffchaff and most frustratingly Rock Thrush have passed me by. I have managed a few decent birds though in Scotland with work although they will only get a passing mention going forward due to it being work etc. 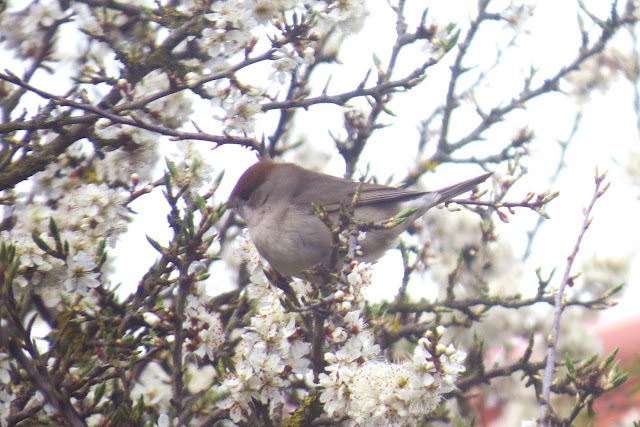 In the garden things are looking up - I came home to the blossom on the hedge, a whole 3 weeks late and containing between 3 & 5 Blackcaps. Score. I have also heard my first Willow Warbler but aside from that and a few Swallows and Wheatears as mentioned in the last post I am devoid of migrants. Maybe going birding may help. Also finally a few inverts in the garden with Bumblebees in the forms of Bombus terrestris, lapidarious & hypnorum the latter a new one for the garden but expected after seeing them all over last summer. Also a couple of commoner woodlice with Common Pill Woodlouse Armadillidum vulgare and Common Shiny Woodlouse Oniscus asellus. All in all a slow start to the spring but hopefully it will get going properly over the next fortnight.

Friday is my 31st birthday. Not too many really but on the cusp of being quite a few. I am, as you may well have gathered, newly employed and this week is my first in the field. A trial run on Friday proved that I can tell the difference between a bird and a stone or a second calendar year Merlin from a Kestrel.

A slight sense of trepidation lay ahead for this week as I slowly worked out what the physical rigours required would be. Mountain climbing? Check. Long days? Check. Adverse weather? Check. In fact it has been extremely physical which as a person of rotund appearance I find somewhat challenging. Despite this I have got stuck in and am now in metaphorical bits. A 500m hill is looked at with pre-requisite disdain. I'll have 2 for breakfast please. And the birds?

Please forgive my lack of precision. It's work after all but my first Wheatear of the year has been joined by several Swallows. Aside from this it has been pretty quiet but plague numbers of Ravens in the wider area have been of note. From the hotel a family of Whooper Swans were present this morning and a pair of Goosander swung past briefly. I am still looking for a funny teal but no luck yet.

So the ache? Well that is in my quads which are used to traversing laterally rather than horizontally. I had to take several hot baths last night after a particularly gruesome 9 mile hike and the inevitable build up of lactic acid. Who knows maybe I can 'get fit'? Nah.
Posted by James at 22:20 2 comments:

I am halfway through my first week working in Newcastle and it has been pretty mental to be honest. Obviously a huge upheaval but I am loving it nonetheless. At the moment I am stopping in a transport hotel on the outskirts which is pretty shabby but it isn't costing the earth so I can cope until I manage to get something a little more permanent for my Monday to Fridays. It looks like next week I am going to be on site and it may well be snowy in the hills.

Bird wise I have obviously had limited opportunity to get out but I have started my Northumbrian list with aplomb and it now stands at 60 with such crackers as Lesser Grey Shrike and Rough-legged Buzzard sharing a rather spartan domain with my best this week, a Willow Tit at Big Waters. In fact I have been at Big Waters the last two evenings and added plenty of common stuff and watched transfixed as Treecreeper fed within a couple of feet of me at waist height.

On Friday I am hopeful of adding some upland birds but you can never count your chickens so it will be interesting to get out and about.
Posted by James at 22:00 2 comments:

A Trio of Floaters

I have sprained my ankle which is a pain in the...foot. Nothing too serious but enough to put me off walking 5-6 miles on the patch. A quick seawatch proved uninteresting so I went to look at the 3 scarce wildfowl gracing this bit of East Yorkshire. One from the north, one from the east and one from the west. First up was the drake Long-tailed Duck at Hornsea Mere. This cracking bird showed down to 5 metres at times but was a sod to photograph as it was only up for seconds. I managed a few record shots and a bit of video as well as views par excellence. 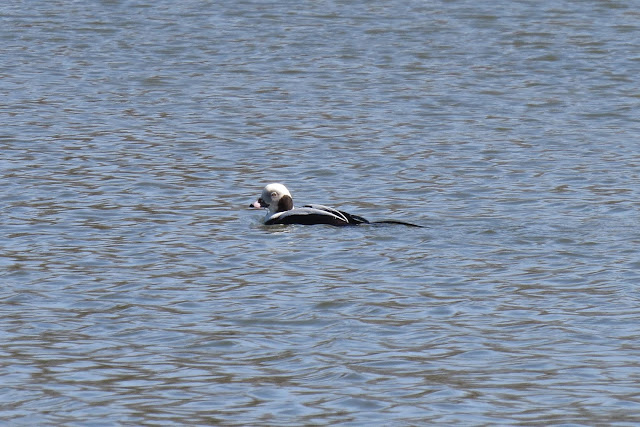 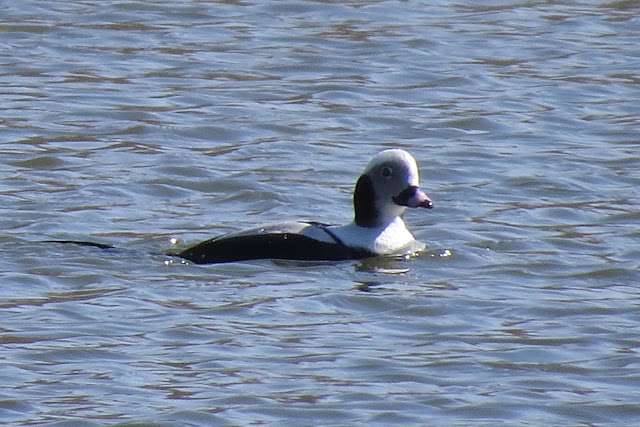 A bit of video is here http://www.youtube.com/watch?v=zbJhaCYp5mI&feature=youtu.be

This was followed by the first winter drake Ring-necked Duck that has been on various local water bodies but at present is residing on a fishing pond at Arram. This again showed brilliantly amongst a large flock of Tufted Ducks. 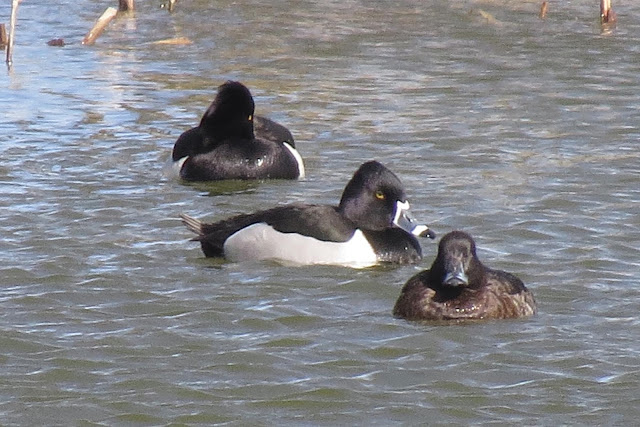 Again I managed a bit of video which is here http://www.youtube.com/watch?v=qPisBHLIP3o&feature=youtu.be

Lastly I called in at Tophill Low for the breeding plumaged Red-necked Grebe which has been on O reservoir. This showed least well of the three but only because of the sun. In fact it was within 50 yards feeding away and I managed to snap some record shots and get a video. 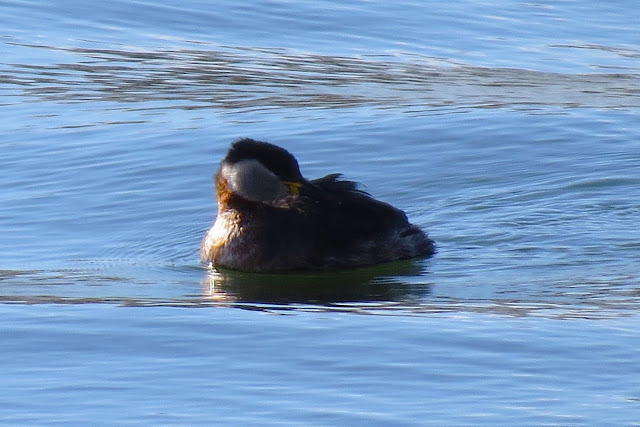 The video : http://www.youtube.com/watch?v=u0Zw_ShRjuo&feature=youtu.be
Posted by James at 17:05 No comments:

Todays post is one of continental subspecies. Last weeks Stonechat appears to show a white rump thanks to an observant watcher who got photos. This allied with the decent collar points towards nominate rubicola as opposed to British and near continent hibernans. I managed a few photos and videos so click on the youtube links and peruse at your pleasure.

The other interesting bird I saw was a Song Thrush which appeared normal until it flew when it showed a grey rump. No as obvious as on a Fieldfare but pretty striking nonetheless. It was the first one I had consciously seen although I am sure many others have passed me by during proper migration periods. Talking of migration...nah, no proper migrants. I slogged round the south of the site and not much was in evidence - a single Curlew, Buzzard & female Sparrowhawk. Calling in at the pine plantation got me the first of two patch ticks today, a fine male Siskin. I spent too long fannying around and missed the photo oppo. Nevermind - he was smart though and amongst the first Goldfinches that I have seen there for a while. 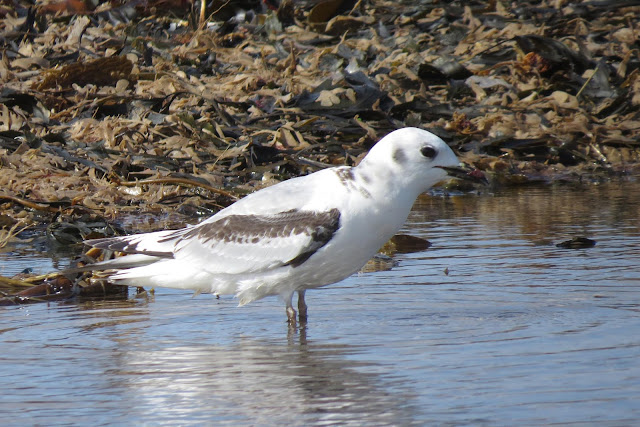 Offshore the first proper assemblages of Red-throated Divers have started with 34 present between Barmston & Ulrome. When I arrived the tide was high so I headed south but by the time I got back to the car it had receded significantly and there were thousands of gulls and waders to the north of the camp site. Nothing unusual amongst the gulls could be picked out as a chav walked the tideline. He did however push all the waders along to me. The throng contained Dunlin, Sanderling, Knot, Grey Plover, Turnstone, Purple Sandpiper, Redshank and Bar-tailed Godwit. 4 first winter Kittiwakes were also involved, scoffing hurridly. All very smart. Here is a video of the waders working along.

Another birder was asking about the Jack Snipe so I gave him a tour of their favoured spots and on cue one popped up along with 2 Common Snipe. They are far too fast for me and my camera sadly... As we wandered back old faithful floated past the clifftop showing some dark looking coverts. 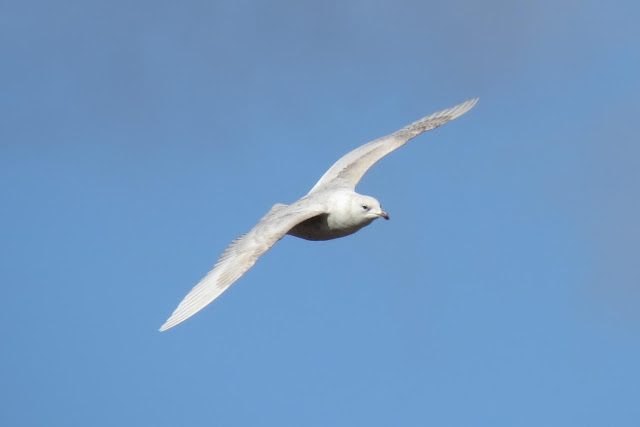