This morning I made my first visit to Flamborough for a few weeks and a special effort was made to catch up with the flock of Lapland Buntings which have been showing to all and sundry over the last week. There was nowt doing initially but I added Great Crested Grebe, Yellowhammer, Goldcrest, Goldfinch and Great Spotted Woodpecker to my #PWC2017 efforts. West of Booted Gully produced a few Skylarks and Linnets as well as a Corn Bunting which flew west out of the field and then alighted on trees at South Landing before continuing towards South Dykes. 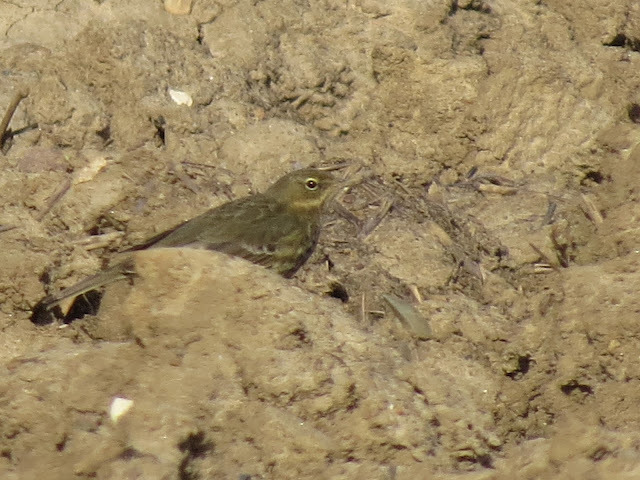 I relocated to the field east of Booted Gully and a couple of littoralis Rock Pipits were foraging in the ploughed field, one of which showed a nice pink throat. Eventually a single Lapland Bunting called and then circled the field, presumably looking for the remainder of the flock before disappearing beyond the brow of the hill. I moved onto North Landing to check out the Pochard/Tufted Duck combo which have been in residence, both of which should be tricky to catch up with. There was also a bonus pair of Shelduck ensconced although these weren't needed for the year after a quintet which flew north in January. 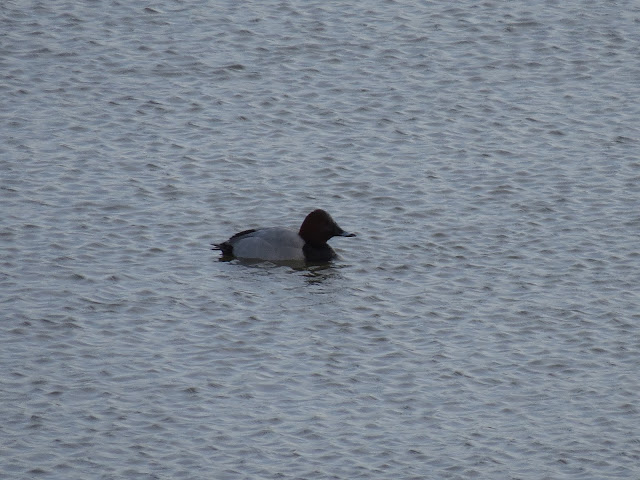 So I borrowed Pete's new camera

Pete needed showing how to use his new camera... 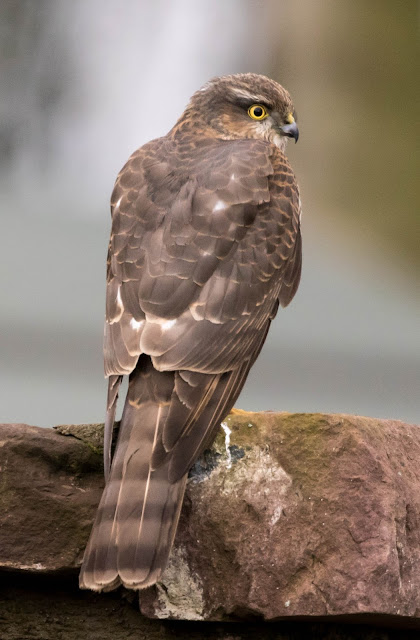 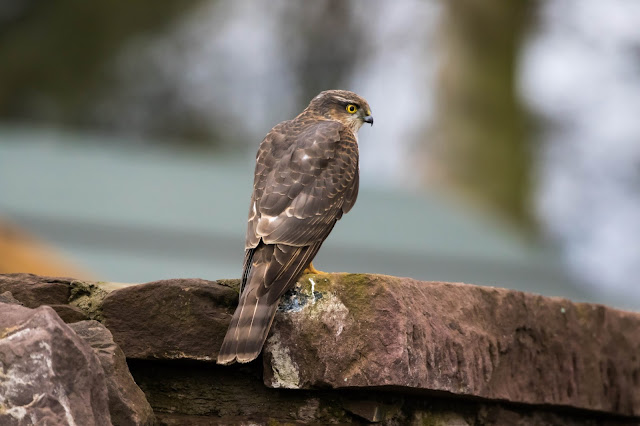 Last Friday I was doing some work in Druridge Bay on a realignment site. It was blimin' chilly and I was glad of the conclusion after seeing very little. Afterwards I thought it would have been rude not to check out the Pacific Diver at Druridge Bay country park. The light was appalling but despite this I picked it out at the Eastern end by the outflow from the lake and made my way round. There was a small crowd as it fished constantly between the reedbed and outflow giving great views of its distinctive jizz and more subtle fieldmarks. It showed a definite routine of stick its head up above the water post dive and then slowly bring the body to the surface, followed by a brief cogitation followed by some odd angles with the head and then a half leap of a dive. 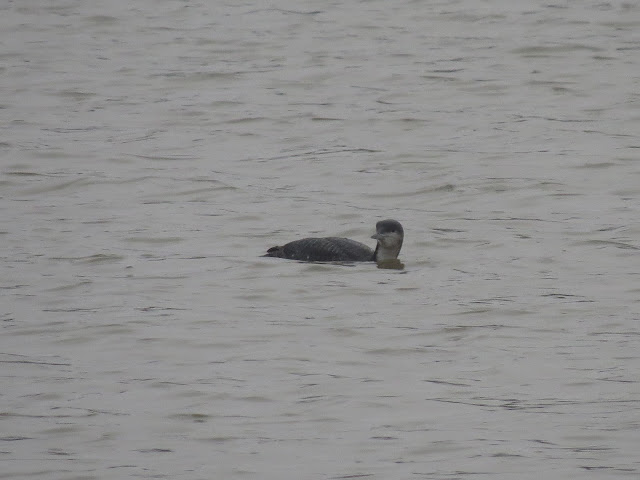 This was my second Pacific Diver after the first record at Knaresborough and whilst the weather was grim and the excitement didnt really reach those levels, the views were much closer meaning that a better assessment of the bird could be undertaken in the field. The bird is still present as I type so I may get another chance to view in better light. Hopefully it moults into the outstanding summer plumage whilst present. 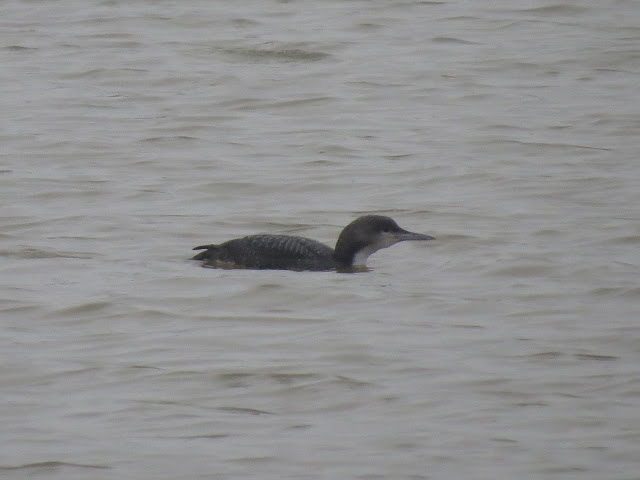 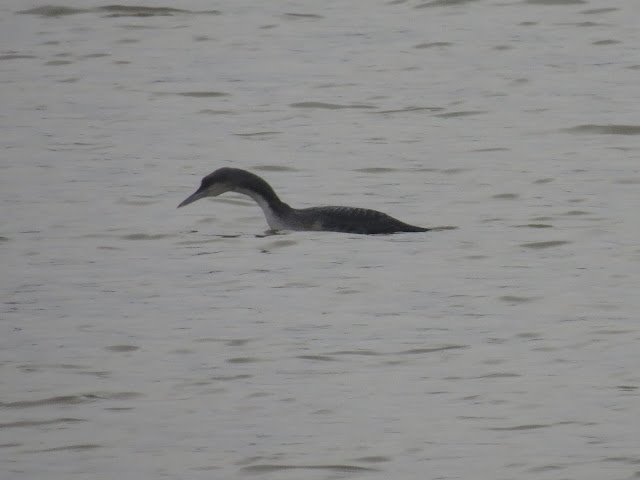 I shot off home realising that if I was sharp I may have a shot at the Pine Bunting in Dunnington, near York. A reasonable journey time gave me a two hour window at the bunting. I was initially with a crowd of perhaps a dozen at the south end of the paddock which contained approximately one million Yellowhammers but no icy version. Those surrounding didn't seem overly bothered but I could see a couple of birders at the north end looking intently so I relocated up there.

One of the birders was Chris Gomersall who found the bird inbetween scouring the tip at Rufforth for Caspian Gulls. Chatting to him he thought the bird had a routine and had been seen twice already in the willows at the north of the paddock and he was confident it would again. Plenty of passerine interest was present with Brambling and Siskin amongst the yammers but the larger flock stayed distant.

Time ticked by and confidence ebbed with the other birder, wandering into the next paddock. Dusk was just minutes away when Chris yelped - 'its just landed in the tree, its the only bird'. We got about 20 seconds of excellent views before it disappeared, presumably to roost with its citron brethren. This was a new bird and I was delighted that perseverance paid. It was number 313 for Yorkshire which is ok I guess and a goodie for sure.
Posted by James at 12:05 No comments:

With this years influx of Cattle Egrets I have been looking out for one with the Little Egrets that roost around Huntspill since the autumn. Pete got lucky on our last visit with a flyover bird at Combwich in January after he found a bird in Devon late last year. I finally got lucky yesterday as an egret flew across the A38 at dawn and its mechanical, quick flaps and awkward shape attracted attention and as it came out of silhouette an obvious yellow beak was seen. Pete was in the passenger seat and we both jumped to the same conclusion after the I pointed the bird out.

Largely forgetting about the Egret I cracked on with my survey work near the Huntspill sluice and I was joined by a couple who were trying to get photos of the Avocet flock. After an hour in which they were only rewarded with Redshank and Dunlin on the closest bit of mud I heard some tinkling trills of a passerine which I instantly knew was the Snow Bunting which has been doing the rounds between Burnham and Huntspill. The bird dropped in 10 yards up the path onto the rock armour and posed briefly before crossing the track and foraging for over and hour in the margins. 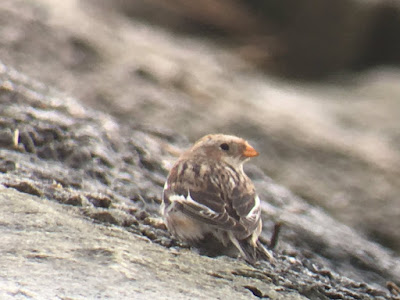 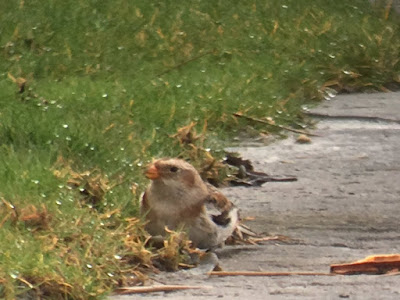 On leaving we noted a load of egrets in pastures which prompted a quick scan and the second bird had a blunt yellow bill. Sadly we had a queue of cars behind us so no time for snaps but it was seen by a number of locals in the afternoon.

Paul and myself moved onto Shapwick Heath and Ham Wall hoping for a few new bits and pieces. In the car park I bumped into the photographers who I saw earlier in the day and mentioned the Cattle Egret to which the woman of the couple said she had some photos and promptly found the bird amongst the throng of its Little Egret relatives in the pictures. Kicking about the reserve we failed to connect with anything of interest aside from five Great White Egrets.
Posted by James at 17:47 No comments: