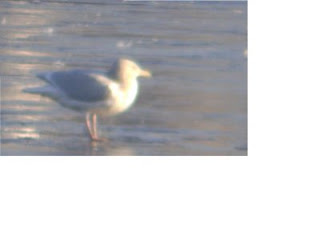 Paid a visit to Smogland to attempt to see the Glaucous-winged Gull that had been knocking about the various spots there. John picked me up at 8 and we set off. Arriving at 10ish we started at Dorman's Pool with no sign initially. We scanned the frozen ponds from the embankment between this and Reclaimation Pool. After scanning for about half an hour I managed to find a new Glaucous Gull - a very brown first winter bird. A goodie for the self found list. A few Pintail bummed about on the ice but little else of note was seen amongst the thousands of gulls and then BAM! 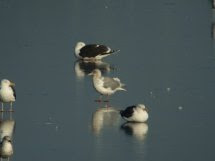 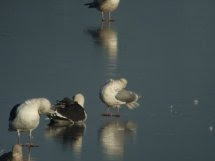 A guy next to us cried ive got it whilst looking at Reclaimation Pond. He didnt but he did have a small adult Glauc - presumably the bird seen over the last few days. Weirdly though as everyone focused on this bird the Glaucous-winged Gull was in the same field of view but head on and took a few moments to confirm. Eventually it preened sticking the primary tip out which were concolourous with the mantle tone. It was smaller than i imagined about the size of a British Herring Gull. It had the mantle tone of a Scandi Herring Gull and a rounded head with a beady eye. A stonking great bill with a big Gonys angle was seen. It had short, raspberry coloured legs with an especially short Tibia. After about 90 minutes viewing from a few angles it flew onto the tip and we headed to Seal Sands quite chuffed. 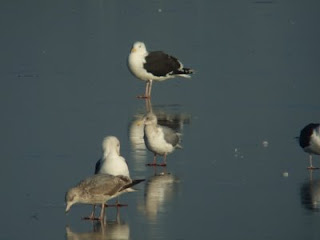 At Seal Sands we managed to see both Common and Grey Seal knocking about plus a few RB Mergs, a Little Egret, Peregrine and best of all a few Twite were sat up on the wires. These have been a bit of a bogey so I was glad to finally catch up with them, the sun glinting off their tiny yellow bills. We soon headed back after failing to see any SEOs. A magic day, and sorry for snoring on the way back John! All pics of the GWG are courtesy of John Sadler. 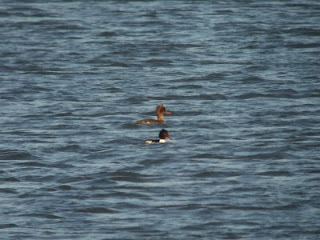