Buoyed on the Wolf sighting the day was young and as such we grabbed it with both hands and decided to head down to the River Duero for some raptor watching in the neighbouring province of Salamanca. The countryside slowly changed from the endless grassland of the meseta into boulderlands more typical of southern Spain before finally becoming dehesa cleaved with mighty gorges. 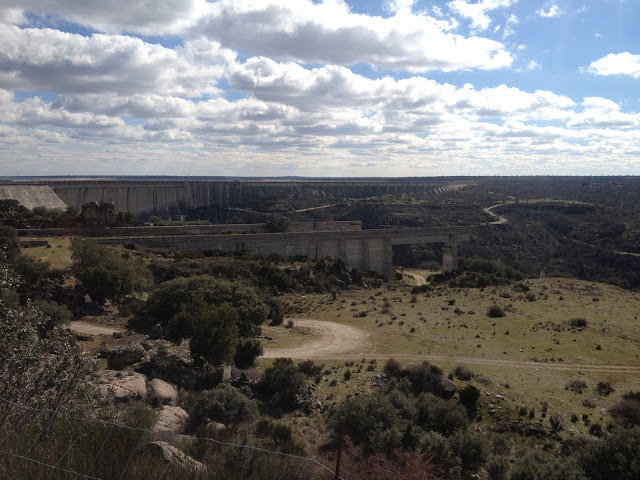 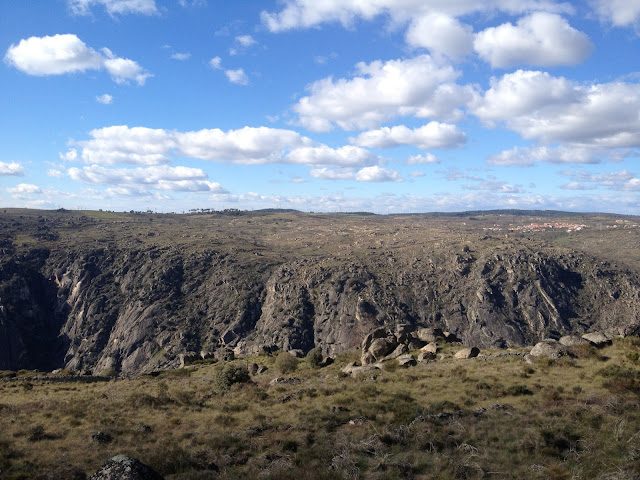 First we coalesced at the Almendra dam, seen in the top photo. Here the familiar twitterings of Serin were heard for the first time and they were a lifer for Rob. Despite Mike's protestations that Serin are shit birds I quite like these funky finches and their bat-like display flights. They make me feel warm which despite the photos it was not. Strong sun enabled us to crawl out of our coats but the car was adament that it didnt really climb above 6 degrees. Crag Martins were interspersed with the first returning House Martins. Griffon Vultures were everywhere in spirals, singally or just loafing on ledges. A pale raptor with dark wingtips was picked up by Rob but nobody else could get onto it so it stayed as a no ID.

We pushed further south and saw plenty more Griffons en route as well as my only avian lifer of the trip - loads of Azure-winged Magpies. They were really cool and it was great watching them going round mob-handed. My first spanish Jay was amongst the first band of these striking gangsters. Aside from plenty more Griffons, Red Kites, Dartford Warblers & Stonechats there wasn't much happening and we didnt have any nest site gen so satiated with the spectacular scenery and Mike's mantra of 'if we had come two weeks later there would be herps everywhere' we headed back the way we came. As we made headway an incoming vulture looked big, broad and dark. I mentally wrote it off as a backlit Griffon but the boys slowly came to a different conclusion. Sadly by the time they did this I was 1/2 mile up the road. I span it round and we headed back. No sign of the vulture which has gone into the unconfirmed category but 2 raptors were up. 2 adult Bonelli's Eagles. These guys are great and it was nice to reacquaint with the species in a new locality.

As we had connected with the Wolves in the morning we had opted to use the full day in the south and then redouble our efforts the next morning. We all opted in for the nightdrive and after a good meal from Monica we set out, spirits high. It wasn't action packed with a handful of Rabbits and Red Deer but the one highlight was my first Wild Boar feeding in the gutter at the side of the road before moving onto the verge as the car passed. We had excellent views and the boar wasn't phased by the car.
Posted by James at 13:08

Nice stuff James, I'm more than a little envious. It sounds like a brilliant trip.

btw, it's fazed, a dialectic corruption of an early 19th century Americanism of a 14th century English word. Pedantic, moi?

Correct of course Ken. In my defence I was trying to write with a screaming toddler on my knee