Yesterday, myself and Mike Richardson decided to go on a tick happy parade round East Anglia starting with the Collared Pratincole at Cley. The pratincole as you may know relocated to Swilly Ings and so we decided a stop off there. Mike rolled up at 5 am and we set off west. First bird of note was a Red Kite over the A1, spotted by Mike. Green Woodie and Mistle Thrush were knocking about in the vicinity. After a few wrong turns we arrived at St.Aidans to be told - 'should have been here 5 minutes ago' by Jim Woolford. Rats. Then a shout went up and the bird shot over our heads giving good views before hawking over the grass embankment flying bat-like. We all got good flight views and were dead chuffed. Lifer and yorkshire tick to boot. We shot off to McDo's to for a faceful of greasy stodge to celebrate. 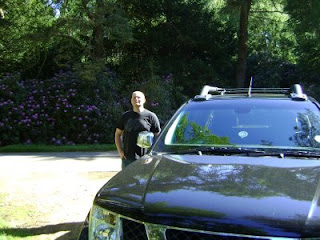 Quickly we were en route to Norfolk. As we hit the Yorkshire county boundary we found out 3 Whiskered Terns had been found at Swillington but we ploughed on hopeful of better. They were probably under our noses and yet the only tern we saw was a common (I blame the sunlight we were looking in to!). In the flatlands of south lincs we had two turtle doves in flight alongside the car which was very nice. After what seemed a very quick journey we gave the Wolferton Triangle a quick twice over with no luck. We headed north to twitchwell for Mikes first visit. A Spoonbill here was a year tick but we quickly left smothered by bank holiday dudes. A Spot Fly in the car park was nice. Avopigs were a year tick. Bleurgh! 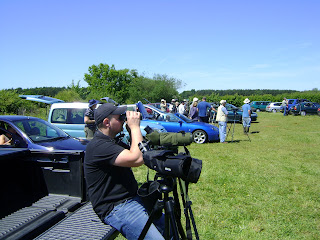 We again shot off, this time to see the Montagu's Harriers. The male showed straight away and we got super views as he quatered the fields before disappearing after 10 minutes.. Next stop, Swanton Novers. We arrived at Swanton around 12 and left about half 1. Sadly no Honey Buzzards were seen by us. We did however pick out a distant Goshawk (despite dissenters - it showed the 5:1 flap:glide ratio and blazing white utc's). Kestrel, Hobby and lots of Common Buzzards were seen. A Lesser Whitethroat rattled away in the hedge behind us. News of a Woodchat at Pugneys in West Yorks filtered through as did buff-breasted sandpiper and RF Falcon at Hatfield Moor, S Yorks but they were all just year ticks (not even county ticks) for mike and I. We ignored them. What we didnt ignore was the Squacco Heron at Wicken Fen, 8 miles from my brothers house (although he is in Aus at the moment). Cley and the north coast of Norfolk were quickly jettisoned in favour of Weeting Heath and Lakenheath Fen. Again we were travelling south but this time through the brecks. 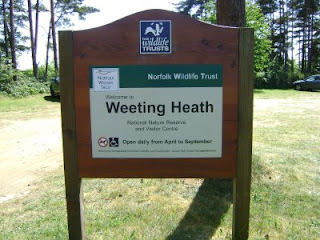 We arrived at Weeting Heath to be greeted by a world of heat haze. A Muntjac was seen scarpering across the adjacent fields and a spot fly in the canopy. Sadly no Stone Curlews were seen and its still one that Mike has over me. We travelled the short distance to Lakenheath and got our shimmy on. Not a lot was on Hockwold washes bar Mute Swans and as we rolled up no Hobbies were visible either. Lots of Reed and Sedge Warblers sang away and gave occasional views. We came here for one taget specifically - Golden Oriole. We were quickly told a nest had been staked down and we ambled along the poplar plantations. Somebody claimed to have heard a male Oriole singing but as we listened first a Cuckoo struck up followed by a Long-eared Owl doing the squeaky door. Brill! No chance of views so we scuttled off - time was pushing on. We suddenly saw a couple of raptors above us, Hobby as expected and then something bigger, and redder and forked in the tail - a Red Kite! A very good bird for Norfolk (unlike home) which quickly spiraled in the thermals which were very efficient in the 22 degree heat. A couple of Marsh Harriers quatered the reeds the far side of the railway line as we finally reached the Oriole nest. The male was sitting and was a plumage tick for me having only had brief views of a scabby female at Flamborough. Every now and then it shuffled about and we pieced the bird together. A nice year tick as well. Up to 5 Hobbies fed on dragonflies over our heads giving amazing views. All of a sudden the male shot off the nest and we decided to turn round. It was afer 6 and we still had to visit Wicken Fen. A Bittern boomed briefly as if piping up. As we left we were greeted with one of the classic images of british birding. LGRE, fresh in from the Squacco virtually sprinting up asking us whether the nest was still staked out. He seemed a little anxious - I wonder why? And then as quick as a flash he was gone. 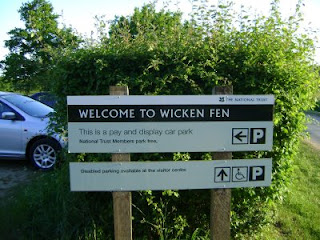 Wicken Fen wasnt too far and we arrived quickly. After a few wrong turns which got us Turtle Dove and Cetti's Warbler singing we found Bakers fen with 13 Little Egrets, 2 Grey Herons and a rather drab and inactive 1st w Squacco Heron. UK tick although both of us had seen more animated and colourful ones in various parts of Africa. Excellent. We got in the car and Mike had a sly grin as at 7.45 I programmed the SAT NAV to swilly again. But alas it was not to be - we figured that after half 9 would be pushing it. Sat Nav had us arriving at swilly at 10.15 (so probably about 10 if we got a clear run). Those wrong turns at Wicken led us astray. We accepted what we had was enough and headed home. The only sighting of note on the way home was a Roe Deer buck. I eventually landed at 11.40 in Nafferton and was barely awake after a 20 hour day. Very memorable and enjoyable plus Im crawling closer to 300 UK - 294 now. Final trip list - 87 species. Minimum. Mint.
Posted by James at 09:24

A full day of birding, something I can only dream of! :-) A great report.

Where are the Montys? I'll be back up there soon, and after checking them out...

i will pm you on bf thing