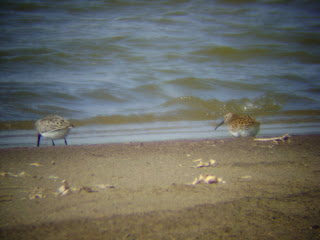 Went for the Serin at Spurn today and rocked up 30 mins after it had disappeared. Doh!!! Compensation in the form of a Yorkshire tick - Mini Terns having mini adventures at Beacon Ponds (apologies to the punks). Also there was a small cream crown Marsh Harrier, probably an immature male and a couple of Dunlin, one in summer dress and on not. A Greenshank flew in tu-tu-tuing. Two flyover Whimbrel and two on Kilnsea Clays were expected fare. A common sandpiper in the flash by the blue bell was less expected but very nice. Heard a Garden Warbler by the Warren but no views. Rumour has it that a Pacific Swift was at Wheldrkae this afternoon with 500 swifts - that will be fun to relocate, the Pallid was hard enough with 50 commons.
Posted by James at 21:42