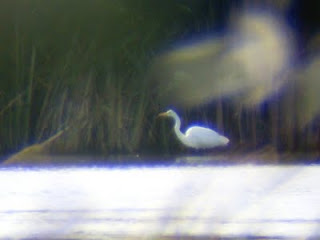 Hope is one of those things that drives you on as a birder. Never real belief but hope - definitly. But Great White Egret was different - I always believed that one would turn up close to home so i didnt have to bother with a proper twitch. Well it finally happened - a slightly distant individual at the west end of Hornsea Mere after dipping the one at Tophill 2 years ago and not going for the Swilly bird (cant believe I didnt realise how close it was when I saw the fairburn Cattle Egret). Anyway a successful visit with added Marsh Harrier (x 2), Buzzard, male Sprawk, GSW and plenty of gulls and hirundines. Sadly I missed the Osprey which was round the lake and a juv WW Black Tern which turned up late doors which was gutting as it would have been a lifer. Going to head down early tomorrow for a look. A UK lifer which puts me on 296 UK & 267 Yorkshire.
Posted by James at 23:23

I managed to get onsite at 7.20pm and although i managed to scope all the little gulls i still can't be certain of spotting the white winger. I also dipped the GWE and the Osprey.

nightmare - will have to get your mob number as I saw your appeal for info but was surfing on my 3G so couldnt reply.