Woke up this morning to the sound of several Chiffchaffs around the house (does call constitute a garden tick? Im not sure of 'the rules'). Washed up to Zach de la Rocha singing his heart out only to be bested by a bird 11cm long.

Was watching Spurs when I got wind of a showy Jack Snipe at Tophill Low on South Marsh East. Decided to bin the football off (thankfully it turns out) and zoomed off. On the way to the hide I found these guys at the side of O res wood. 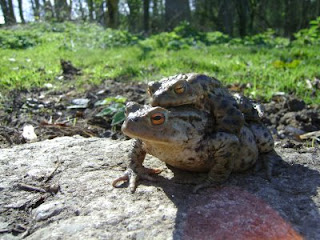 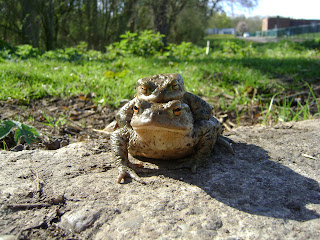 Cue recognisable photo shock!
I quickly made my way to south marsh east and showing incredibly on the mud islands at the back was a tasty Jack Snipe, my first that hadn't shot out from under my feet. Here is a short video in which the bird can be made out. Just. Noticeable field marks viewable are also scant but I promise it showed a dark central crown stripe and a pale mandible base and was in general a short fat, black and gold snipe. Also knocking about were a number of Common Snipe and 10-12 Sand Martins which were a year tick.
Posted by James at 18:18