I'm just back from a n 11 day stint in the Costa Blanca. Not sad to leave the expats behind but a very pleasant break with plenty of birding slammed in. Im going to update chronologically with a species list at the end. That ok? Tough luck bad boy!

﻿﻿ ﻿﻿ Boring bit first we flew with Ryanair and hired cars from......snoring already. Why do people put that shit on trip reports - if you want a cheap car, flight and accomodation ask about it. Use the internet. Write about the birds!!!!

Now the pictures in the report are genuinely awful - they are all pretty much record shots of stuff as I didnt set out to photograph stuff well (just bird bird bird). Anyhow after shit air left us sat on the tarmac for 2 hours we got off narrowly avoiding the French air traffic control strike which paralysed everything. A swiftish couple of hours later we landed in Alicante and in the late afternoon sun picked up our hire car. First bird of the trip was... a House Sparrow. I suppose you have to start somewhere but the usual dross (Blackbird, Greenfinch, Serin, Spotless Starling, Hoopoe, Swallow) was soon UTB without trying. We passed Santa Pola salinas in the falling light of the evening where we picked out Yellow-legged Gulls but little else.

Soon we were passing La Mata - the huge saltlake next to where we stay and notched an early Montagu's Harrier at the west end. We arrived at our flat in La Siesta, Torrevieja a few moments later. From the apartment Collared Doves, Woodpigeons and Pallid Swifts could be seen. This visit, due to the expanding family we were in a 1st floor apartment next door to our elderly relative that we stay with. This gave an amazing vista over La Mata and the surrounding area. The video is taken looking north east. The west end has a reedbed, some sandy scrub and loads of Citrus Groves. Adjacent to our flat is loads of scrub with some salicornia near the water and small stands of trees. To the east is the visitor centre with some basic agriculture, pasture, pine plantations and sand flats. Nice variety.


The firt full day (the 4th) I had two rambles around the local area inbetween doing the things you do on the first day... The first walk was at dawn and the highlight was hearing a Red-necked Nightjar doing its steam train impression. The rest of the stuff was pretty normal (but nice to see in a UK context). Mostly covering the scrub and lake edge I pulled out Iberian Grey Shrike, Thekla Lark, Zitting Cisticola, Slender-billed Gull, Sardinian Warbler, Crested Lark, White Wagtail, Kentish Plover, Avocet, loads of Corn Buntings, a flyover Grey Heron plus dross like Goldfinch, Red-legged Partridge, Common Swift & Shelduck. Waiting for the family to awake from their slumber I chilled out on the balcony with a coffee and my bins taking the above video. Temperatures were high teens (they touched 26 degrees one day and were typically 18-21 with a cold day of 16). A pair of Woodchat Shrikes were flitting about in the scrub ahead and a band of Cormorants flew north west on migration (passage and winter visitors to the province). 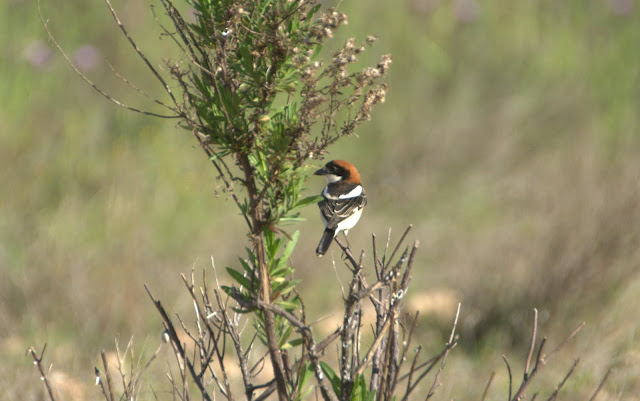 Once the motley crew was assembled we headed into Torrevieja where aside from being a good dad and husband I couldnt help noticing a Lesser Black-backed Gull circling a trawler from my vantage point on the promenade. Plenty of Audouin's Gulls were patrolling the harbour - they were more common than Yellow-legged Gulls generally throughout the trip. I couldnt help but notice the plethora of Feral Pigeons in the town... Yuk. A shower was looming and this cut short our trip.

Once the rain had passed I had a late afternoon ramble which saw a few migrants including 7+ Willow Warblers and 3 Cuckoos. Other stuff included the distinctive Iberian Green Woodpecker (full species surely) plus Redshank, Great Tit & Common Tern. The latter on their breeding colony. Day 1 done and 38 species (plus 1 heard) mostly reacquainting myself with the locals although the Lesser Black-back was a Spanish Tick