I was over the crest of the holiday in terms of birding and I was pretty pleased with what I had seen but I wanted to focus on migration for the final third of the holiday. I was pretty lucky on Tuesday, 10th April as I stumbled upon the migrant capital of the local area - a campsite at the east end of La Mata within a small pine plantation and it held birds! I had caught up with a female Redstart in Potato City Park which was being bothered by a Robin and the weather was unsettled with big cloud masses passing through although only dropping their precipitation on the mountains of the high Sierras. It was obvious birds were moving but numbers werent huge. In the afternoon we visited the aforementioned campsite so Isabelle could play in the park.

I couldnt help notice a small warbler flitting amongst the branches from my bench and closer inspection showed an all white underside and plain face - Western Bonelli's Warbler. I got really good views as the canopy was only at 8 foot high - a significant improvement on my previous with this species (2 dips in Yorkshire and a poorly seen bird last year in a cork oak plantation. No photos sadly, nor of the three Little Stints that were bothering the resident Kentish Plovers from the wader hide round the corner. I was allowed a 10 minute walk around the fields and an upright passerine gave the impression of a wheatear sp from front on but when it turned laterally its plain mantle and long tail immediately gave it away as a Tawny Pipit. In terms of scarcity this is perhaps the rarest bird of the trip as it is a scarce migrant (1-2 records per year) and doesnt breed in the province. Similar in status to say Bluethroat in Yorkshire. I was chuffed but the local birders weren't impressed the next day (are you sure it wasnt a Richard's Pipit, I havent seen one of those here in 15 years etc etc (Richard's winter at La Mata in moderate numbers)). No photo which further inflamed them but corking views and at the time I thought it was a lifer but on inspecting my literature it appears I saw one on Kos in 2005. At the time I was a complete newbie so that could have been any lark or pipit really... It felt like a lifer anyway so I was very pleased. A female Redstart was also evident in the darkness of the pinestraw within the plantation as we left the area.

An evening reading on the balcony gave me 3 Bee-eaters west and as dusk became night at least three species of Bat. There was a tiny pippistrelle species hawking the lights low down and an audible small bat that flew a little higher and further - my first impression was also a pip sp but Im not sure if any have audible echo location which was easy to hear with my ears. Maybe something else. There was also an audible large bat which ranged widely and was more often heard than seen - maybe Noctule although there are other large bats present I think. Again im not sure which are audible to the human ear. There may have been a silent large bat sp as well but it was hard to seperate as the bigger bats didnt come down low very often. 3-4 Stone Curlews were seen flying and calling over the scrub and Red-necked Nightjars were heard. Just before I retired what sounded like a party of Cranes flew overhead but my certainty was masked by next door having the mother and father of all arguements.

The 12th started with a male Crossbill sat in the pine opposite the balcony before moving west (I wonder if they are breeding in the lowlands this year as they have never been present at La Mata for me before). I had Isabelle at the park in the morning to let my wife get some sleep and feel human so naturally I took her down to the plantation where Mistle Thrush were getting amorous with plenty of song and food carrying. Not a species I remember from Spain but apparently I saw them 4 years ago. A couple of pairs breed in the locale. 3 Redstart including a male were working the darker areas of the floor and a smart male Pied Flycatcher was seen and badly photographed by the gate. The slightly higher and more open area produced a brief Wood Warbler and a pair of Blackcaps. Lots of migs. I didnt get to the wader hide but I was pleased with the haul. 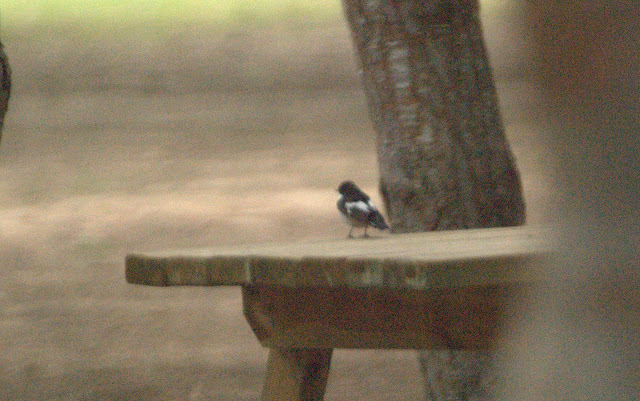 In the late afternoon I visited the raptor watchpoint at the west end with Isabelle napping. It held plenty of migrants like this morning with a male Marsh Harrier and a distant Great Spotted Cuckoo passing by, both 2nds for the trip with the harrier getting grief off the local Monty's. A Stonechat was perched in the reed stems and a couple of Willow Warblers were in the small, shrubby pines by the water level control building. A few Dunlin and Sanderling were new for the trip and they were joined by a handful of Turnstones and Redshank on the spit. A hulking 2nd summer YL Gull was also there with a few Slender-billed Gulls steering clear. Soon Izzy was waking up so we cleared off for an ice cream.

The afternoon of the 13th, the penultimate day, had a Tree Pipit in the plantation with left over Redstart and Pied Flycatcher despite overnight rains but upon returning to the flat thousands of swifts were in evidence and a bit of perserverence pulled out a prolonged view of an Alpine Swift flying over our relatives back garden with a Common Cuckoo seen flying west as well. A few Cormorants were also on the move and a party of8 headed west with a singleton north west.

I managed to get a pass out for 2 hours on the morning of our departure and threatening cloud had failed to deposit any rain on the lowlands so the plantation held leftovers again with male Redstart and Pied Flycatcher plus a male Blackcap in a similar place to the pair a few days earlier. The wader hide was equally quiet despite the raucous noise of returning Common Terns. The three Little Stints were still present and progressing nicely into their confusing summer plumage whilst diligence paid off with a Grey Plover hiding amonst the salicornia being new for the trip. I was annoyed with the returns and with 40 minutes left I decided a seawatch was required with little expectation. The driving meant I had 25 minutes and only my bins (scope head is in the shop at the moment due to catastrophic failure a while ago). A couple of Little Egrets were fishing in the surf and as I moved round to the rocks of my chosen promentary between La Mata and Torrevieja a Whimbrel was farting about with 8 Turnstones and the same of Sanderling. With 2 minutes to go my heart was sinking when I picked up a small group of 5 Balearic Shearwaters heading south only a couple of hundred metres out. I have finally caught up with these on their breeding grounds! Further out Cormorants were passing when a couple of birds caught my eye as having a different flight style and close inspection revealed a 3-4CY and 2CY Gannet at about the limit of my binoculars effective distance. A province tick although I had seen many on the Plymouth-Santander ferry years ago. It was time to go.

It had been an excellent trip with plenty of great birds and sights. 113 species were seen all said and 2-3 were heard only (Lesser Short-toed Lark, Water Rail and possibly Crane). A few mammals and lots of Butterflies and insects were also recorded. Soon we were back at the decidedly chilly East Midlands airport.
Posted by James at 12:45