Snobs, Lulu and no GPs

Im staying in Dersingham, West Norfolk as I am working down the road in Snettisham. Just finished my first day today and there were massive numbers of waders at high tide - much more than last year. A couple of Black-tailed Godwit, Avocet and a decent wedge of Pintail were the highlights on the survey although far more like it were the 74 Snow Buntings that gave us a flyby a couple of times. And that was todays survey - plenty of common. Yesterday we tried for the Golden Pheasants at Wolferton (and twice today) but failed. Now up to 15 dips for that particular species. Arse. We did have a wander on Dersingham common after we packed up today and birds were singing all over. Woodlarks were very much in evidence with three singing birds and a small group of Crossbills darted over. Crests calling all over but only Goldcrests seen. Must try harder! Plenty of Hares and Muntjacs in the woods and fields as we traversed the local area.

﻿ ﻿ Yesterday at home I had an hour walking in the village and a Little Egret was still in the stream (saw 3 the day before - I wonder if the GWE is knocking about here as well). A Kingfisher provided a brief spark of ultramarine but disappeared quickly. Lots of birds were singing but it was the Hares that were the chief interest with several chasing round the fields and boxing. 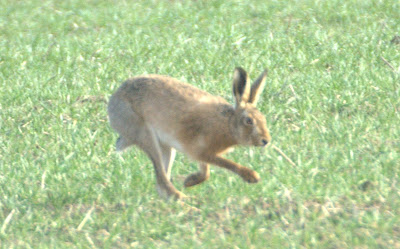 ﻿
The last couple of days in Essex were steady with the same species recorded. The best bits were a Least Weasel hunting the scrub in the track margins as we crossed the reserve and a Wood Mouse that Jon trapped. Peregrines and Spotted Redshanks were regularly in evidence and Brents topped out at over 1400 birds but no RB Goose or Black Brant sadly.

Oh - forgot, I also saw my old friend Y20, a Black-headed Gull at Hornsea Mere when dipping the white-wingers. Still cant find out where he is from.

Have you tried Germany for your gull?

No - looked on cr-birding.be and reported it to euring. Have you any details on the scheme?

Hi James. Although your bird has only two numbers after the 'Y' I reckon it might still be worth emailing The Serbian project (which is 'Y' followed by three numbers) because sometimes a fully comprehensive list of codes is not included on cr-birding. Email as follows: buza 'at' ravangrad.net

Cheers Gavin, I had seen that scheme but hadnt been in touch as I waited for a return. I have now dropped them an email. Hopefully I will get an answer!