Apologies for the lack of posts recently but I have been at sea on and off for the last ten days or so. During this time I have made the annual missing of Ornithological Idiocy's birthday come true. This year we turn 4. I cant believe I am still churning this bollocks out after 4 years but I love going back through it so it will continue.

In actual birding news I managed to visit the Hebrides and still not see an Iceland Gull although I did stumble upon a Buzzard and a Raven mobbing a couple of juvenile White-tailed Eagles just east of Oban. At the time I was driving and I took it to be a couple of crows mobbing Buzzards. Thankfully I snapped out of it but it was over a copse. Very odd. Raven and the eagles were year ticks although I hope to get much better views of the eagles soon. Additional (and expected) year ticks came in the shape of Hooded Crow and Black Guillemot. Very nice. On survey was terrible. 10 species in two days (3 auks, 4 gulls, Gannet, Fulmar and erm... something else crap). Razorbill and Puffin were year ticks! Can tell I hadnt been to sea in January. Common Scoters were seen on transit and were also a year tick. A couple of Grey Seals and a good number of Harbour Porpoise were good value but neither was as funny as my survey leader puking his brain out in a 3m swell. Poor fella was annihilated and humour was eventually (grudgingly) replaced with sympathy﻿. And that was the best bits although a 6'4 women who looked like late-era Michael Jackson at the Highland Cattle meeting in an Oban hotel bar was very funny. Even weirder was her 6'6 mother towering over her. I felt small. 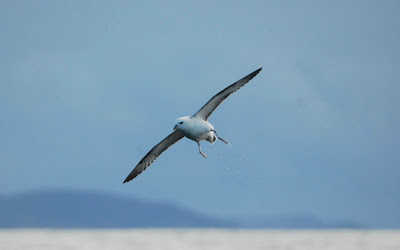 This week I have been largely in the North Sea somewhere. Less in the way of year ticks (Little Gull) but certainly a little more variety. Not gonna say too much really aside from a Greenshank was a surprise and a couple of Common Seals  were decent. So 4 years old!﻿