Cruising for a Sab's 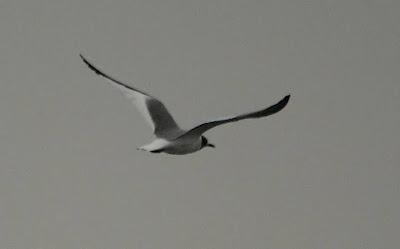 I was extremely fortunate to be on the RSPB Cruise out of Bridlington on Sunday. Firstly we had Martin Garner calling and secondly it was fricking awesome! Despite spending far too many hours surveying (350+ at current estimate) I hadn't seen a couple of regular british seabirds but now only Long-tailed Skua is left.

A good turnout with perhaps 15 birdforum members in attendance and a place at the head of the queue mean't we commandeered the front starboard side of the boat. From this position we were able to move about without pissing off too many old codgers and we skorred BIG. My McBrekkie was spot on allowing plenty of change for the car parking thankfully.

In the harbour a couple of Purple Sandpipers were in attendance and a flyover(under?) just missed my hash brown. Pretty rapidly the harbour was just a stinky stain on my smell-o-vision and we were out in the bay. Common  and Sandwich Terns were very much in evidence with plenty knocking about and a small group of Common Scoter nipped past at range. There was not a lot doing with the conditions - although there was a weak front going through mid-morning meaning seastate 2 dropped to seastate 0. This grounded tonnes of birds amongst the flightless auks which were in rafts a couple of miles off Flamborough head.

First up was a distant Arctic Skua which was soon followed by the flying cigar that is a Sooty Shearwater although this individual was more stationary and bobbing like a cork, moving short distances when the boat got a little close allowing views of the all dark body and pale underwings. Another Sooty was called pretty soon and this again was sat motionless on the surface. I wasnt happy with it - sure it was dark but its proportions were all wrong - it was more cigarillo than full blown cigar. I voiced my concerns to my compadres suggesting a dark Balearic Shearwater when I was promptly put back in my shed by a pompous old fucker who said too dark. Thankfully it then flew and it showed a pale chest and belly in a narrow patch and this diffused into a dark vent. Structure said Balearic and once it settled I could make out a small pale area on the chest whilst sat on the water. The following pics make it more obvious than it really was due to levels being played with. These are Michael Flowers' pics and they clinched it and shut the old b'stard up about projecting feet beyond the tail tip. SOOTY SHEARWATERS DONT SHOW PALE BELLIES YOU STUPID TWAT! is what I wanted to say. But didnt, obviously because like Will off the Inbetweeners, I am a speccy wanker and thus dont do that sort of thing. So there you go - self found Balearic when 100 people are looking at it including the UK's number 1 ID guru (who was having the same thoughts apparently but my big gob opened first). 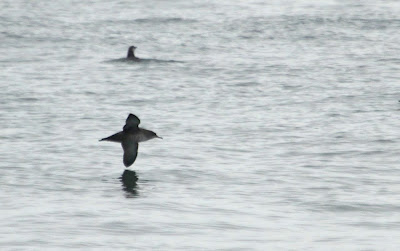 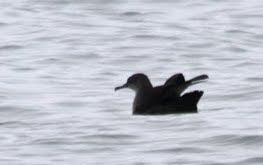 Resting on my laurels a shout went up of Sabine's Gull! Much to our collective astonishment an adult Sab's went past in almost full sum plum. Not that I knew it at the time - I got onto the same views as the photo (due to the photographer being next to me - thanks Jim (James Thomas) but was intent on the wing markings and as it was called as a juv didnt think anymore until the photos came out. Tickable but arse-end views of a handsome bird. It zipped straight through and didnt come into the chum.
Aside from spectacular feeding Harbour Porpoise it quietened down with a handful of Manx shearwaters  making their way past and a Bonxie blasting straight past. The yorkshire belle was pointed toward a flock of terns which held a juv Arctic Tern which again I called, a little hesitantly (bar on trailing edge rather than wedge in primaries was all I could remember). We moved on and found a flock of 20 or so Little Gulls. I should insert some nice pictures here but sadly I just formatted my CF card instead. doh. A few 1st winters and 3 juvs were in evidence.
We had been out a while and so started steaming back where we encountered a few more Little Gulls and an adult Arctic Tern. Once back in Bridlington Bay it was pretty mental with a good few Arctic Skuas harassing the gulls and terns plus 5 Red-throated Divers flying high including a group of 4. A Curlew blogged past Dane's Dyke but star prize went to Jim and his Black Tern search image which sorted out 9 birds including a flock of 6 as we re-entered the harbour. I did have quite a reasonable photo but that went in the great CF disaster of 2011.
Fish, Chips and congratulations were the order of the day back in Brid before a decamp to Flamborough for a chance of the Buff-breasted. No go but a few Whinchats, Stonechats & Wheatear were a brucie bonus at North Landing. Myself and Rob/Trystan (name is Rob, moniker is Trystan not 2 people) had a quick trip to Hornsea where two female type Red-crested Pochard plus a female Pintail were the highlights along with a couple of cream crown Marsh Harriers but no Glossy Ibis (a party of 5 had been seen over Atwick in the morning headed toward the mere). It was late-ish and raining so I called it a day leaving Rob to try Blacktoft for Curlew Sandpiper (successfully).
Corking day, great company, good birds and Sab's was a lifer so 323 UK and 285 Yorkshire. Sa-weet.
Posted by James at 22:40

I've got a piece of software called Cardrecovery that can get photos off accidentally formatted cards. Did me well after my card corrupted after a friend's wedding the other week.

Software cost £30, but if you want it done for the price of the stamp feel free to pop the card in the post and I'll do if for you.

Thanks for the offer Peter but it was one ok-ish photo of a Black Tern and a few reasonable shots, nothing ground breaking so I think I will leave it. Thanks though.