Bluethroat is one of those species I have always wanted to catchup with due to their appearance in all my birdguides as a kid and rarity/beauty. I dipped on a scaggy juv. 3 years ago on the beach at Spurn and had millisecond views of a female in Spain 2 years ago. If you have read my previous blogpost you will have noticed that today hadn't gone well so when the plumber kindly told me it was all the original installers fault and that the valve was in upside down I had a big grin on my face - someone else is going to kop it AND I can have a crack at the Bluethroat.

I shot down to Spurn and arrived about 15.20. As I arrived 4 other guys were knocking about and they said they were getting views regularly although brief and inflight. I was quickly treated to views like this but not enough to tick. One of the gents (who was nice enough, dont get me wrong) was complaining at the top of his voice that the bird wasnt showing well. He continued until I got a better view and everyone hushed. Not surprisingly the little gem came up the ditch to within 8 feet. Wonderful views were had but it was thick reeds so photos were difficult, allied with dipping light and the elusive nature of the bird and the fact I had to put the camera into manual focus meant that I struggled a little. Below is a shot that highlights the views. 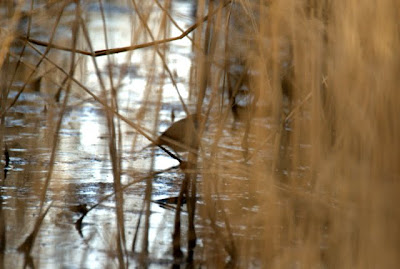 Eventaully the loud chap and his mate pushed off. I lay down and the bird came in beautfiully to about 6 feet or so working side to side in the ditch, occasionally stopping in the middle and feeding well allowing me my
opening photo. Although hazy and partially obscured you can make out the most interesting feature - the white-spot. But why the interest?

Its a bit more complex than this but March Bluethroats tend to be White-spotted Bluethroats - Luscinia svecica cyanecula. These are continental birds which overshoot rather than the red-spotted birds which were  formerely pretty common drift migrants in May returning to Scandinavia. Interestingly they have different ecological niches, leading to differing behaviour. Excuse me here as I am going to grossly oversimplify but cyanecula are birds of reedbed - skulky and difficult to see whilst svecica breed in more open areas and are more prone to being seen on marshes and the like, in the open. Thus white-spotted is both rarer and harder to see. This bird constitutes the 3rd record for Spurn and the first in 45 years for this subspecies. It has been aged as second calender year by the contrast on the spots on the primary coverts. Not a feature you can see in my photos sadly...

It is a British and Yorkshire tick for me so Im pleased on that score as well plus its a grip-back on John Sadler who was running away in a little competition between him, myself and Mike Richardson. Good news. I'm back surveying in Lincolnshire on Weds/Thurs/Fri so hopefully will have some fodder for you then.
Posted by James at 20:57

I thought you'd got a decent camera now, but I see you're using your mobile phone again ;)

(It's only the green-eyed jealousy talking)

I was really happy with these! It was never going to be easy. Sadly real life dragged me away or else I would have laid at the end of that ditch until I got crippling views.