I write this at my kitchen table instead of in Suffolk as I should have been. A turn up for the books meant that we came back a day early but not until we had visited a couple of Suffolks RSPB reserves. We werent due to start work until midday and as such we decided to go for a ramble around Boyton Marshes in the hope of some Cranes. 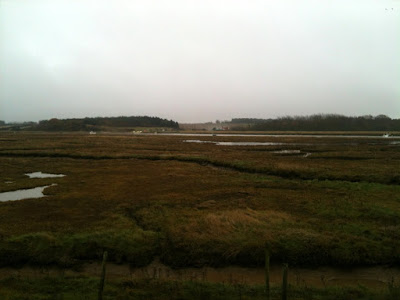 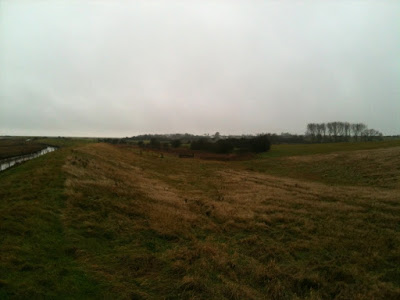 Initially we got stuck on the wrong side of the river at Gedgrave marshes but some quick stearing had us redirected. Upon arrival it was evident that a vast flock of feral geese were in the fields adjacent. Canada Geese were in the majority with lesser numbers of feral Barnacle Geese and Greylags. Thankfully a few wild birds had tagged along and we managed to pick out at least 15 European White-fronted Geese. Walking on to the marshes were large numbers of Teal and Wigeon with a sprinkling of Shoveller. The ducks and Curlew grazing in a further field attracted the attentions of several raptors with 2-3 Marsh Harriers and a single ringtail Hen Harrier hunting the margins. As we returned to the car an adult Peregrine lazily flew overhead before putting on the afterburners and disappearing over Havergate island. No sign of the cranes but very pleasant.

We rolled up to work only to find the site closed and we soon called it a day and headed off to Minsmere to make the most of the remaining light. Aside from a couple of Reeve's Muntjacs  and a good number of Marsh Tits not a lot was seen but the sound of the marsh in the late afternoon was glorious with pinging Bearded Tits and Lapwing passing overhead. A couple of Green Sandpipers were seen in flight over the woods as we left which was odd. A gloomy picture below shows the view from the Bittern hide with a flock of Lapwing visible (if you squint). 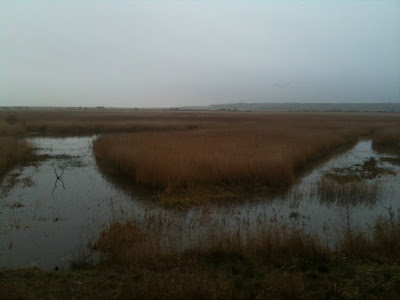 ﻿
Another good day of birding. Hopefully I can catch up with the Green-winged Teal and Greenland White-front tomorrow. And whats this I hear about a Cattle Egret just outside the village?﻿
Posted by James at 22:59