Today I was working on the humber and this gave me the opportunity on my break to visit the Sei Whale which drowned in the river and was washed up at Skeffling. It is pretty ropey now with the action of the spring tides and warm autumn taking its toll, leaving mostly the shell of a carcass. The tail stock is still complete but the body is desicated and decomposed, stinking to high heaven. Apparently it was much worse 6 weeks ago. Here is a video and picture of the whale for those with voyeuristic tendencies. Pervert.

﻿Aside from the whale﻿ the birding was pretty good with juvenile Hen Harrier, Short-eared Owl, Whooper Swan and some confiding Twite all seen off survey. Some distant White-fronted Geese were a bonus and a couple of skeins of Pink-footed Geese were expected fare although nice nonetheless.

A trip to Tophill Low yesterday for an hour failed to produce the expected Greenland White-fronted Goose amongst its Russian cousins but on D reservoir were three Whooper Swans which were a nice find. Cue record shot. 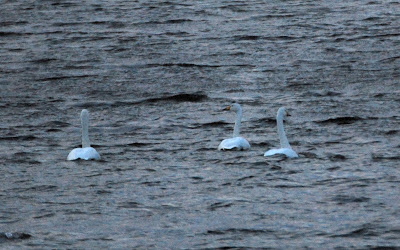 This post was more in depth but blogger deleted it so I had to start from scratch. There should be plenty more to blog about in the coming weeks if all goes to plan but there may be plenty which I cant say...cryptic!
Posted by James at 21:28