Day 10 was samey with a flyover Osprey in the pool the highlight so on Day 11 I ventured all the way to Ilheu do Curral Velho to get a better effort on the frigatebirds. Sadly a fail but I did manage 3 Cream-coloured Coursers on the stony desert plains prior to the sand dunes. Quality birds that I loved seeing that were like a cross between the Hoopoe Larks and a Lapwing. There were plenty of Brown Boobies doddering about on the islet but nothing else sadly... 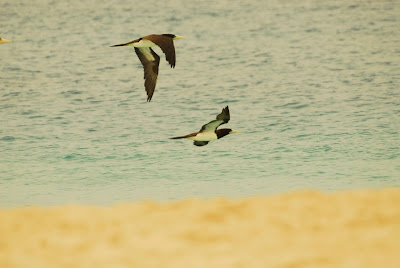 Day 12 was my day out and I headed to Rabil lagoon - the premier wetland site in the Cape Verde Islands and the premier place for rare herons. En route I had a troupe of Helmeted Guineafowl , a lifer although Cat C on Boa Vista.This on recount was my 400th world lifer. Not too bad... Additionally a few more Coursers were noted as we traversed the morning desert. 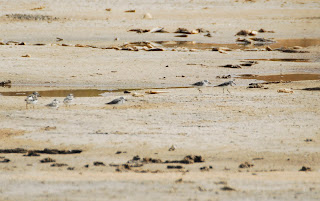 At Rabil Lagoon plenty of waders were noted along with singing Spectacled Warbler. Sadly the birds were all the same sort of thing as on the lagoon with Sanderling, Turnstone and Curlew Sandpiper dominant with lesser numbers of Stilts, Kentish Plover and 2 Wood Sandpiper plus a single Greenshank and Ringed Plover. A juv Grey Heron overflew getting me excited for 7 milliseconds. A few Whimbrel were noted further up the lagoon and amongst them the big trip rarity - a Curlew. Curlew are a 3 star rarity apparently in Cape Verde with 7 records by the time birds of the atlantic islands was published in 2006. It looked to be a male, dwarfing the Whimbrels but without a very long bill of a female. After a couple of minutes it flew high out into Sal Rei bay.

A few tourists on Camels ventured over the sand dunes as I headed back to the main road disatisfied with my return. An Osprey fished over the bay and a Little Egret had moved onto the lagoon when I got back to the top. 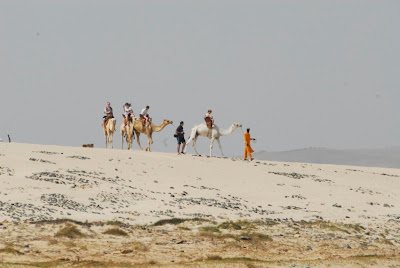 Overnight the heavens opened and Boa Vista received the heaviest rains in 15 years after a completely dry wet season last year. 13 Maids were put in hospital by newly sprung rivers overturning their vehicles and we were nearly flooded in our hotel room as water poured through the hotel flooding adjacent rooms. The pool was filled with mud off the gardens and looked like a sewer in the morning.
A wander down to the lagoon showed it had tripled in size and similar lagoons had sprung up behind the beach in several places. Waders had spreadout in this new haven and only a Ruff and 3 Black-winged Stilts were in evidence. A seawatch provided a passage of Shearwaters at c5/minute. These were all at 2km range and I could only identify Cape Verde Shearwater and a couple of Sooty Shearwaters. A few pteradroma-esque birds could have been fea's but who knows frankly... Sooties it turns out are pretty rare but I cant think of any other large shearwater that would show an entirely dark underside and upperside that would be more likely. Far too big for Bulwer's. A plan was hatched for an early doors seawatch from next to Ilheu do Curral Velho.
ABORT ABORT ABORT - my 2 year old decided that staying awake all night would be fun and alongside light rain caused the abandonment of the seawatch of dreams. GAH! Oh well - reason to head back to Cape Verde if not Boa Vista. The last sighting of interest was the only migrant passerines of the trip - 3 lucky juvenile Barn Swallows. This took the trip list to 32 species - not bad for August on a family holiday I dont think.
In addition 4 species of Butterfly were noted - a male Mimic, African Emigrant, African Grass Blue and an orange tippy type small white with green mottled tips. 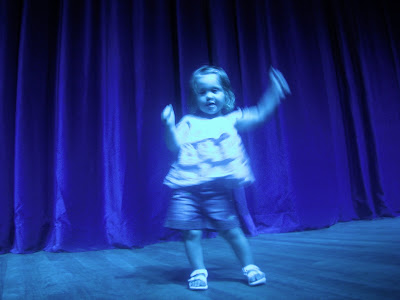 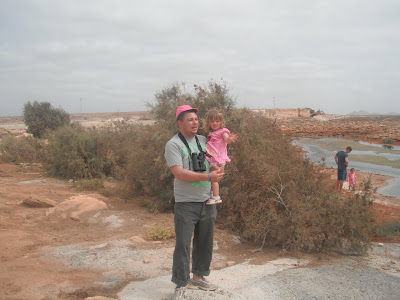