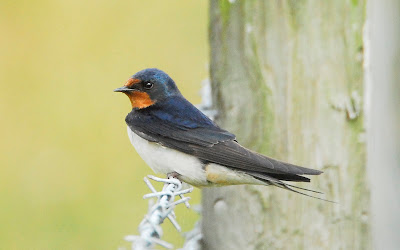 Was at Spurn with the BF boys (Michael Flowers, Keith, Rob, & Mark). It was a cracking day with the undoubted highlight a self-found Yorkshire tick in the form of a Storm Petrel struggling north over the surf from the seawatching hide. We also managed a juv/1st winter Yellow-legged Gull in the roost at Chalk bank. I picked it initially on the unnotched tertials and despite the fact the bird sat down with its beak under its wing for the most part it did eventually show its mask, long legs, faint pale window in the primaries and strong bill plus it was bigger than the Herrings in the roost so presumably a male. It wasnt very pale headed but I wrote that off due to its young age and thus lack of wear/bleaching. 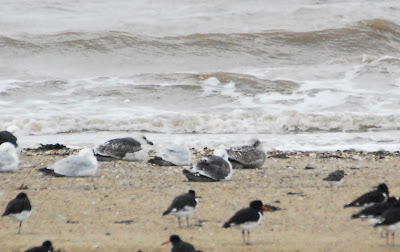 The day started with a seawatch from the Bluebell between 7-8 but the light was awful and a lone Sooty Shearwater, 2 Common Scoter & an Arctic Skua were picked up along with plenty of Sandwich Terns. Once the rest of the chaps arrived we ambled down to the seawatching hide with a Yellow Wagtail or two puntuating the journey. Once we arrived at the hide we saw nothing for a while but it picked up with 7 Manx Shearwaters south in a two small groups. An Arctic Skua passed at the same distance. This was interrupted by the amazing views of the Storm Petrel. 2 Velvet Scoters flew north slowing our leaving of the hide swiftly followed by a Bonxie and then an Arctic Tern or 2. The seawatch lasted until 11 and yet aside from the Manxies and first Arctic Skua all were seen between 10.30 and 11 - not typical seawatching times.
We checked Canal Scrape out and a Yellow Wagtail blogged about with a Lesser Whitethroat feeding in the bushes at the back. A good number of hirundines were seen dip feeding and a Reed Warbler sang uncertainly.
By this time we had seen a number of Butterflies - Wall, Gatekeeper, Meadow Brown, Ringlet, Peacock, Small White, Green-veined White, Common Blue & Small Skipper. Time was marching on and we headed to Chalk Bank for the wader roost. We had Greenshank, Little Tern, Bar-tailed Godwit, Whimbrel, Knot, Sanderling, Grey Plover and Sandwich Tern with the waders and amongst several hundred Dunlin a single juvenile... 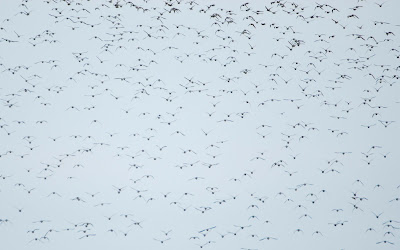 Amongst the gulls was aside from the YLG was a single adult intermedius Lesser Black-backed Gull.
We then hiked up to Beacon Ponds where a Solitary Sand Wasp was found and we also discovered that 3 out of the 5 of us were deaf as me & Rob could hear Mole Cricket & Roesel's Bush Cricket which sounded like air raid sirens to me and yet...
We found an odd wader which I couldnt place at Beacon ponds but was probably just a Dunlin. A Curlew Sandpiper was delicious as were a few Little Egrets. Lots of terns bobbed about but we failed to nail a probable Black Tern which flew through.
Posted by James at 22:27

Your Gulls looks very hefty indeed - did you manage to rule an immature Great Black-backed out?

Nice one with the Stormie!

Hi Steve - yeah - definitely wasnt GB - whilst bigger than the Herrings it was only slightly - and significantly smaller than the GB juvs that were about. It really stood out and was grey toned rather black & white. The bill whilst bigger than an LB wasn't that big. It also had no noticable tertial step when it stood up. When it took off the underwing had a nice dark bar along with a faint window. I know the pics arent good but the tide was only 6m at Chalk bank so everything was quite a distance away.

Really don't want to sound rude James but that is no Yellow-legged Gull. Juv YLGs aren't grey-toned (more sandy-coloured) and look a bit more like this at this time of year: