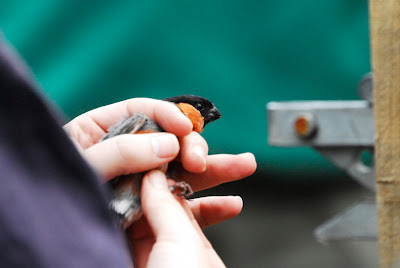 We had another CES session this Sunday. It was pretty slow with only 12 birds caught but a nice variety with 9 species. Highlights included a male Bullfinch, freshly fledged Blue Tit and re-traps of Song Thrush, Blackcap, Sedge Warbler and Reed Warbler. Of even more interest was news from the previous visit that we managed a control of a Sedge warbler. At the moment we know nothing more but I will fill you in when I get the chance.

The slowness of the session allowed appreciation of the other wildlife in the vicinity including a gorgeous solitary wasp - Chrysis ignata. Sadly we failed to get a photograph. we also managed a Common Frog - a tophill rarity! 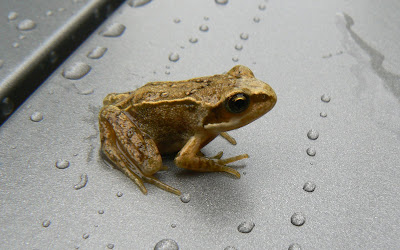 We also had Grass Snake on the hay bales and tonnes of grasshopper sp. which we think are a combo of Common Green Grasshopper and Field Grasshopper but I am so woefully naive with insects its untrue.
Butterflies were the main attraction with many species on the wing including Small & Large Skipper, Marbled White and lots of Ringlets.
Posted by James at 12:56