I spent most of today with the Yorkshire BF boys and girls. Sadly it was awful weather but we managed a few decent birds although we had our schedule severely curtailed and several targets failed to play ball. I set off at 7.30 to pick up John & Mike. En route a couple of Barn Owls provided entertainment at Bracey Bridge - the male being the palest bird I have ever seen with no evident markings. I picked the boys up and we headed on.

We arrived at Filey at 8 and left by half-past. Winds being surprisingly easterly and F6. The only things picked out were Red-throated Diver, Red-breasted Merganser and a few Common Scoter.

Wykeham was but half hour away and we decided to regroup at Forge Valley feeders. This provided the de rigour Marsh Tit & Nuthatch year ticks as well as a Peregrine for most of the group. A raptor watch in the next valley produced 3-4 Buzzards including a bit of 'mewwing' and some half arsed display. The oxbow at Hilla Green failed to produce the hoped for Mandarin despite literally seconds of effort. As we crossed the river we failed to see any Dippers as the water was too high. The winds were much less in the valley but it was still pretty dank. A decision was made to head for the Great Grey Shrike.


We gave the shrike 20 minutes to reappear - enough time for a few flyover Crossbills and some distant Siskins. No sign alas of the shrike and lunch beckoned. We were all getting pretty bummed out by the dipping and the rain.


Scarborough was its usual lovely self but as we were purchasing our chips the Iceland Gull appeared. It then decided to show really well. Unfortunately in near dark conditions I managed to overexpose most of my photos. Here are the best thus far... 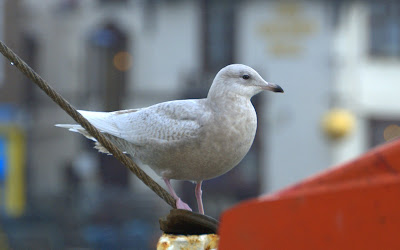 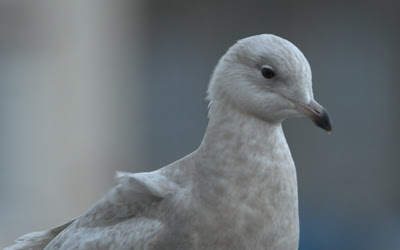 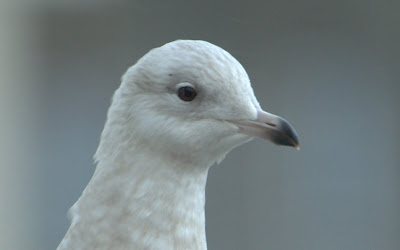 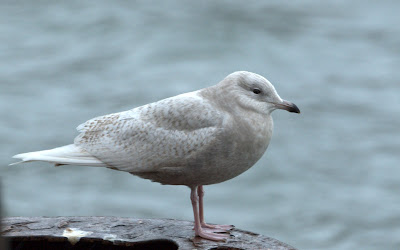 After we had our fill of this we called in at a final stop...Holbeck car park. It held 5+ adult Mediterranean Gulls. I managed a few shots in the rain including the following. Whilst at Holbeck we scanned the sea picking up Red-throated Diver, Common Scoter and a few Porpoise in the bay.
This was enough excitement for Mike, John and myself and we retired as the others hit Tophill Low.
Posted by James at 19:18

Thank God I was saved by my bad back!

Thank God I was saved that torment by my bad back!

That iceland gull is one handsome bird!

Cheers guys - was a cracking bird, shame about the light.

P.S. james posting above isnt me...