Using counting coots as a template I am going to shoe-horn enough buzzwords to get pervy teenagers to improve my hit count from innappropriate google searches whilst also providing the third instalment of my shag on the Costa Blanca series (previous entries were April 2008 & August 2009). Also I would like to celebrate Ornithological Idiocy's second birthday. The candles have sadly already been blown out so you'll have to make do with this trip report with de rigour bad photos. Unfortunately I only took two that even vaguely resembled birds and one of those was a frigging female Stonechat. 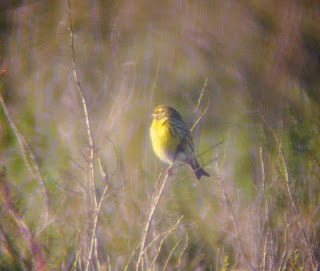 Anyhow an uneventful flight from Leeds-Bradford into Alicante was made as pleasant as possible by Ryanair who gave us priority boarding due to our enfant terrible. It was just after midnight on the 29th when we set off for the sleepy suburb of La Siesta for a weeks stay with Angela's slowly dementing aunt. My priorities were somewhat different with a couple of vagrants high on my agenda. The first day contained minimal birding opportunities but a morning walk provided the first of many Black Redstarts. These were to provide a constant companion whilst wandering about the scrub of La Mata along with the ever present Sardinian Warblers & Thekla Larks. Along the fringes of the salina were a a few Zitting Cisticolas and a handsome Dartford Warbler. Hoopoes were getting horny on the rooftops and chasing each other about whilst making some good awful noises. A few Crag Martins with the odd Sand Martin whizzed above the scrub. I called it a day when the only birds on the salina itself were a few Slender-billed Gulls with their Black-headed Gull co-geners. A few Yellow-legged Gulls blogged around the harbour in Torrevieja but that was the height of further excitements. Fortunately Saturday promised greater birding targets. 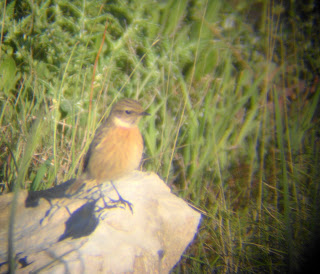 Albujon, Murcia was the destination on Saturday morning for the first Belted Kingfisher in southern Europe. A rather forlorn slog around the irrigation reservoirs led to a dispondent birder but as I was completing my wander around the reservoir a huge steel-blue and white apparition dived into the water on the small reservoir and then perched briefly before flying off - it was the bird I had come for and ecstatic I was too. Sadly the kingfisher was gone for good along the irrigation canal. All too brief but sectacular all the same. Also seen in the same area were scores of Chiffchaffs and White Wagtails with a couple of Grey Wagtail working the canal edges. Crested Lark calls and Serin song filled the air. A band of Black-winged Stilts were accompanied by a Little Egret. Super stuff. The family then went to Murcia for some cultural learnings. And coffee.
The sunday was spent in Benidorm and the less said probably the better but good numbers of Kestrel were hunting the roadside verges. A Cattle Egret nearly met a sticky end as it crossed the road infront of the toll gate on the AP-7. On returning to La Siesta huge flocks of starlings were assembling above Elche - presumably to roost in El Hondo. 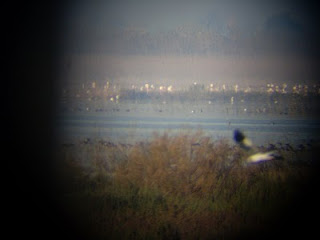 Monday saw a fullday pass out and I hit El Hondo. Watching from near the North gate a few Marsh Harriers started hunting over the reeds. Chiffchaffs were everywhere and the first Cetti's Warbler of the trip was calling from near my feet. A couple of Buzzards were perched up on posts scanning for rodents. No sign was had of the Spotted Eagle which roosts in the line of eucalyptus trees crossing the view. I decided to change tacts and headed round to the West Gate. Here I had the fortune to bump into local birder and guide Graham Critchell. We gassed about the loal scene and he gave me some good gen. Booted Eagles mixed with the Marsh Harriers and a male Hen Harrier gave some grief to the other raptors. We both picked up a bugling sound...Cranes. 4 groups of threes and fours gave a total of 15 birds emerging from the marshes and joining up in the skies over Crevillent. They circled high and were lost to view after 20 minutes. Graham mentioned that they had been wintering on El Hondo and they occasionally looked as if they were headed off but return later. Not long after he said this and we could hear cranes from another part of the reserve. Super birds. A Southern Grey Shrike busied itself trying to murder Zitting Cisticolas & Sardinian Warblers in pursuit flight. The south gate produced c10,000 Common Starlings with a smattering of Spotless Starlings amongst them. A real surprise was in the field behind the gate - 4 Blue-headed Wagtails (a very early date). Whilst speaking with Graham I mentioned a larger streaky pipit amongst the Meadow Pipits at La Mata and he said that it was almost certainly a Richard's Pipit as about 10 were wintering at El Hondo and a smattering were in the dunes at Santa Pola so there was no reason for them not to be at La Mata. I had another brief encounter with a similar bird at La Mata just before returning home but couldnt get it nailed on the deck and neither time did it call.
Santa Pola was next up and an Osprey flopped over the road. Also amongst the thousands of Yellow-legged Gulls were a Common Sandpiper and a Turnstone. A handful of Stilts and Little Egrets bummed about and a couple of hundred Greater Flamingos fed up in the distance. By this time some due needed to be paid to ma famille.
On the Tuesday we headed to Cartagena and birding was neglected. Wednesday morning I headed to try and score the Spotted Eagle at El Hondo which opens the north gate for 3 hours each Saturday and Wednesday. Unfortunatly I was lumbered with Isabelle as Ange fell sick overnight. A slow amble was protracted by regular feeds. Eventually we reached a ower to watch over the marsh from, where we scared the bejesus out of a pale morph Booted Eagle and saw the only intermediate phase bird of the trip. An Osprey scooted across in front of the tower and loads of ducks were a novelty - Spain ticks galore - Tufted Duck, Teal, Shoveller and Red-crested Pochard . Two lifers then revealed themselves, the first was long awaited and the second much anticipated. A number of Cetti's Warblers sang at me and a few gave brief tickable views. These were surpassed by a showy individual which sat in the open whilst singing and was seen on and off for ten minutes. As I checked through the plague of Chiffchaffs one birds was immediately different - it had a bandit mask and a russet back. Finally three Penduline Tits gave cracking extended views. A male Hen Harrier floated through. Finally we reached the tower at the end of the trail and could hear a few Moustached Warblers but no veiws were had and these remained unticked. Bumping into Graham again along with two other local birders it was clear that we had been in the wrong position to see the Spotted Eagle fly off after it had perfromed all morning - dammit. Purple Gallinule and Water Rail grunted in the background. I missed a Golden Eagle over the distant mountains as I got on the wrong raptor - a Booted Eagle. Not too worry eh - two more raptors to come back too. On leaving I headed to the South Gate and got views of plenty of Reed & Corn Buntings including plenty of the latter singing.
A family walk along the promenade produced the final few decent birds of the trip - single Sandwich Tern, Audouin's Gull and SHAG! A Shag in Torrevieja - who'd have thought. 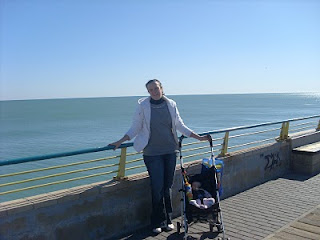 Doesn't seem to have worked at the mo - languishing a bit at a lowly 503 at the moment of typing, but hopefully the weekend pervs will push it up a bit