The reason I have put Wykeham in apostrophes is because we lasted about ten minutes there. Rain and mist = no raptors. We instead headed to Filey via Forge Valley feeders and Holbeck Car Park. The two waypoints mean nothing to birders outside Yorkshire but here in God's Own they mean one thing - year ticks. Forge Valley is a well known site for the brutally range restricted Nuthatch which occurs commonly on the southern fringe of the North Yorkshire Moors and then in patchy distribution from York westward. It is absent pretty much from East Yorkshire. Also there are a really easy load of Marsh Tits with no interfering Willows to confuse you. Both species were seen well after a wait and a Long-tailed Tit was pratting about feeding like a blackbird on the deck. 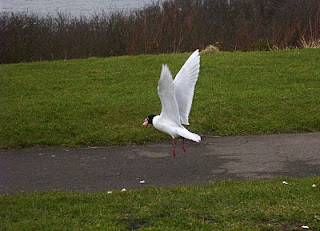 Holbeck means Mediterranean Gulls and a 79p Spar loaf gave us tremendous views of a minimum of 5 indiviuals including adults and 2nd winters. This extended session even led to my point and click getting in on the act. 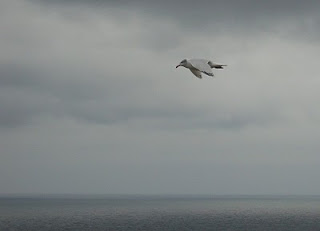 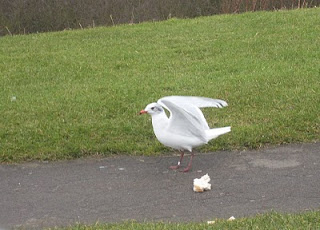 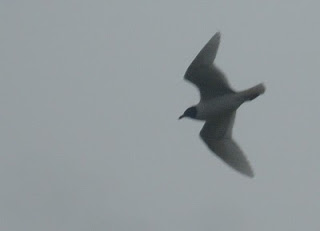 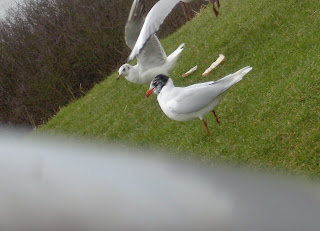 Our final destination - like a bad B movie was Filey where we ran into several proper good birds. As we left the car park a group of waders gave up on aerial roosting and decided they fancied feeding on a flash in the country park. Mostly Oystercatcher and Redshank with a touch of Turnstone, also present were a few Knot, Dunlin and a single Bar-tailed Godwit.

Wandering down Arndale to the sailing club we were notified of a male Black Redstart but we failed completely to see it. Shame as I havent seen an adult male. I did manage to find a Black-throated Diver out in the bay. A lifer for a few of us and a very good east coast bird. I was chuffed to bits. Also kicking about were several Eider, Shag and loads of Common Scoter. Marks eagle eyes pulled out a Great-crested Grebe and an unresolved dark looking large Grebe in choppy water.

We decided to scope the bay from the upper-cliff to get better views and were rewarded by courting Great-crested Grebe on the sea off Primrose Valley. These were surrounded by FIVE Slavonian Grebes. An amazing count and a high for the bay this winter I believe. We headed round to Carr Naze to give the scoters a good viewing. The Black-throated Diver flew north out of the bay... and yet it was still where it was originally. Hang on - in its place was a Great Northern Diver. Another really cracking bird. As we examined the scoters there were no obvious male velvets but prolonged watching revealed a female Velvet Scoter that only revealed its white secondaries as it crested waves. Cheeky cow. It was cold now and time was marching on so we abandoned. You may notice that my only pics were of med gulls. My battery died. What can I say?

p.s. Thanks to my partners in crime Paul, Mark and Keith

p.p.s. Mark and Paul saw the Black-throated Thrush early on making it number 200 on the BF meet list

p.p.p.s. Black-throated Thrush, Great Northern Diver, Slavonian Grebe and Velvet Scoter are all new additions to the meet list and take the total to 203.

and i finally added Canada Goose to my year list. Score

Well done with the Meds James. It's not a species I have luck with. I think I have a blind spot for them.