In order to escape the cabin fever at home, family Spencer escaped to Flamborough Head for a Sunday constitutional. We were headed for Filey before my darling wife decided to re-direct us. Obviously I took the bins - it would have been rude not to. A few Guillemots uzzing about on the sea were a year tick.

We headed toward Old Fall hedge and I explained to Angela about the merits of the Pale-bellied Brents that were up there. She got the idea of insurance ticking and how they were a distinctive morphologically and with wintering and breeding in different areas meant they may be a 'good' species. It was the most animated I'd seen her about birds ever. A few Yellowhammers emerged from stubble behind the cottages, a further year tick. A 4th winter Herring Gull was doing the worm dance - id not seen it before and the bird was going crazy like it was riverdancing. Seemingly successful as it was still at it 30 minutes later and regularly picked at the ground.
*Safety Notice - The stile from the road onto Old Fall Hedge is lethal at the moment and looks moments from catastrophic failure. You have been warned*
Upon traversing the climbing frame that is the steps the Pale-bellied Brents were immediately obvious, all 22 of them beyond Old Fall flash. Crossing the field along the shit-festooned footpath, good bins views were had. I noticed some Greylags beyond the hedge and vaguely remembering an e-mail about Tundra Bean Geese I wandered round the corner to have a quick look. About 40 Greylags were meandering about at the back of the field. At this point Isabelle decided to scream her head off. She successfully managed to flush the brents and I had a dilemma. I palmed her off to my wife with a bottle so she calmed down whilst a quick bins view pulled a smaller, browner goose amongst the Greylags but as I was getting a handle on it Isabelle started screaming. Time to beat a hasty retreat - its only a year tick after all, no need to get too clinical.
Suddenly who should appear but El Presidente, LGRE himself plus a couple of cronies. A Redshank skirted round old fall flash as I failed to mention my daughters flushing of the brents. Sorry! Thankfully they seemed to be located a field further west when we drove home. We wandered back to the car so I could clean my daughters bum.
I forgot my camera im afraid so here is a rather surprising shot Izzy standing up. At under 4 months. Madness. 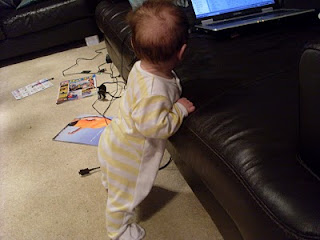