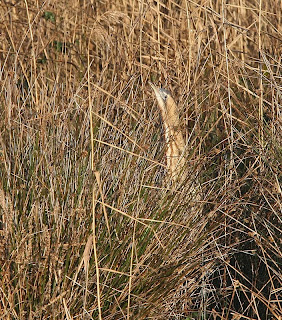 promise this blog hasn't died a death - just a very busy time my dear readers and a complete dearth of birding save one day. A recent JBRC meeting (James' Birding Records Committee) deceided to bin a few records from my list. Purple Heron (a flyover at Spun) went because no matter how many ways I looked at it - it would never get past a real records committee, Nightingale went because it was too brief a view of a bird on passage not calling in a hedge full of female Redstarts, Cetti's Warbler was also binned as the calling bird (a definite Cetti's) moved through a bush I saw something emerge the other side which could have been the bird but also could have been a Wren (seen through a bramble thicket), unlikely I guess but hey its my list. The last bird to go was the Booted Warbler at Flamborough 2 years ago which hasnt been accepted (or submitted I think - should have taken more notes whilst I was there). This leaves me on 298 UK and 272 for Yorkshire with the addition of Ferruginous Duck and latterly Ring-necked Duck (at last!) but more of that in a moment. 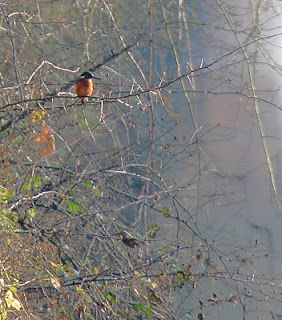 I just wish you all a very happy new year and hopefully a profitable one. Be prepared for a blizzard of pictures of my daughter doing cold during the odd chrimble jaunt out. Plus pictures of her doing unconcerned as many of her presents were opened. Still extremely snowy round here - 17 days and counting now. In fact its currently 7am and I have just returned from an attempt to get to work but fish-tailing at 20mph on an ice-rink wasnt my idea of fun. On Friday I head to Strathspey with my young family and my parents for a week of being very cold. Sounds most excellent and any birding that does occur will be recorded for posterity in both picture and word formats. The 28th of January sees me in Alicante again showing our baby off to Angela's friends on the retirement coast whilst I try to catch up with Tonn the Greater Spotted Eagle that winters in El Hondo. Lets hope that Belted Kingfisher sticks at Mar Menor! Also this year I should be surveying again in Scotland so lets hope for lots of good incidental birds like LT Skua and White-billed 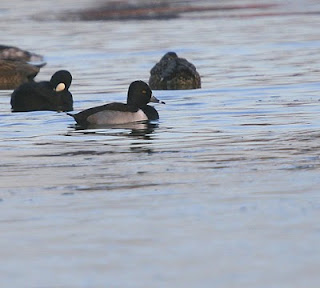 Diver as we now have some west coast sites. Im cutting my hours at work in order to facilitate my wife returning early. Which is a crying shame obviously as it means I will have time to take Isabelle out (birding). Hooray! And finally before a report on real birdwatching (by fake birdwatchers) my yearlist has begun with no decent bird sightings although I have managed a couple of Foxes, plenty of Hares, a myriad of Rabbits and this morning in the snow a Polecat/Ferret crossed the road 50 yards in front of the car. A lifer for me and likely a Ferret I believe but I didnt get any details on its coat/build really. A good sighting nonetheless.

so...
On the 28 day of the 12th month of the year of our lord two thousand and nine a band of birdspotting reprobates did undertake a mission to Potteric Carr. It was cold and snowy and there was an extreme dearth of bird numbers but some extremely decent birds were seen with a Lesser Redpoll kicking off precedings for the group whilst the journey in contained Red Kite, Grey Partridge and Jay. A wander about the reserve produced a few Bullfinches at Low Ellers but no Bittern. The marsh was iced over - we hoped this wasnt the theme of the day. Moving onward to Piper 20 minutes of scanning brought nothing until it was kindly pointed out that the Bittern was showing 50 yards or so in front of the hide. My first in a couple of years and by far my best views of one on the deck which isnt saying very much at all. Ambling on as the rest of Piper was ice-laden we scanned Huxter Wells which had lots of Greylags wheeling about overhead and a mixture of the common gulls (as opposed to Common Gulls) including a few Lesse 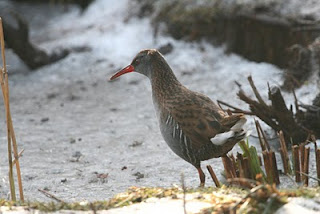 r Black-backs which are a little scarcer out east. My legs started to ice to the floor so in order to avoid unrinating on my own feet to set them free we headed in the direction of the cafe for a refreshing Bacon Sandwich and Coffee combo. En route we saw The Kingfisher in his usual place and Keith found a none birdtable trained Water Rail snuffling about at the side of a drain. The pork based produce was extremely well received all round, as was the caffeine boost. We visited the bird table hide whose name I forget which produced brief views of Willow Tit plus a few Reed Buntings. The Water Rail did its usual thing and Rattus norvegicus was very much involved although sadly without a Bittern trying to murder it as had been the case of the preceding week. It was decided as a group to head for the Wakey duck-fest to try for the Fudge/Ring-neck/Sawbill orgy. Meandering toward the carpark a large group of Lesser Redpolls and Siskins were found amongst the alder but there was no sign of the Cetti's Warbler that had apparently been singing on and off all morning. Time was starting to press so we made haste around Barnsley and pushed on to the Calder Wetlands.
Calder 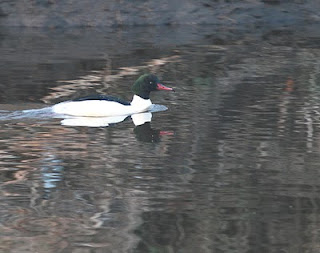 Wetlands is a stones throw from Pugneys and had about as much icefree water as my sink. It was raining Great-crested Grebes - i havent seen so many in flight before let alone crashing into the ice before. All ended well. There was a very lare number of Aythya ducksin the vicinity although the Ferruginous had bogged off. A gaggle of Goosander passed overhead as we noticed a dusky sided duck amongst the Tufties - the 1st winter drake Ring-necked Duck. This is a lifer and I was extremely chuffed as it is also about the biggest tart left for me in county along with Firecrest. Keith and Rob wandered off to the river to try and catch up with the white nun that had been seen on and off in the area whilst myself, Mark and Paul stayed put with the ring-neck. We heard how the Fudge had pushed off, possibly to Wintersett (although it later turned out to be Anglers). Slightly dismayed we followed Keith and Rob only to notice a rather strange shape emerge from the reedbed - they had flushed a Bittern. The bird was seen well in flight for several seconds as it traversed the rather paltry reedbed but we all stood aghast as Keith and Rob wandered on oblivious to the consequence of their actions. Obviously I rang Keith to grip him...*ahem* try and help him to get on the bird but alas it disappeared into the six reedstems that constituted the eastern end of the reeded never to be seen again. A wander along the river gave up a few more Goosander, Little Grebe, Kingfisher and Goldeneye but no Smew so we decided to head back to the cars and home as the sun set on a cold and productive day in southern Yorkshire.
With thanks to Paul Reed with the photos
Posted by James at 06:56

eep!what's a Lesser Redpoll? Birding taxonomy and nomenclacture has moved on since I was active. The upside is armchair ticks. Now, where did I leave that copy of my life list?

Lesser - that would be Redpoll as opposed to Mealy which is now common...

I mean Common, not common, which is Lesser. Erm...

I think you do the right thing sir.

Hopefully you will get many new ticks this year and that the trip to Scotland went as well as it could.

Im still convinced it was a booted warbler but hey ho...