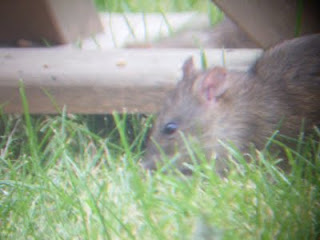 I have rage in my heart and murder in my blood. There were twelve of them, evil to the core. I snapped. I didn't know this inner animal existed but it does. Those rats better beware.
I know its been a quiet week on the idiocy and for that I apologise. There have been zero decent birds that are still within a two hour trip to hull royal infirmary via home. I have moved my feeders up to the bay window in the dining room to discourage the four rats that started visiting. Sadly this merely meant a dozen appeared strewn across the garden. Some snooping proved that they are breeding underneath next doors decking. Drastic action was called for when one made a halfhearted attempt to investigate the patio door. Repeated threats to buy an air rifle soon bore witness to the economic amswer - two slig 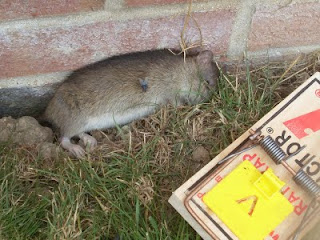 htly shit rat traps. So far they have been set of six times, with two definite hits. One stunned the rat and in all likelyhood it crawled off to die. The other, well you can see in the photo. Sadly the better of the two traps has only been triggered twice. I dont like, endorse or enjoy killing but I cant have rats in my house and that is the likely next step.
Birdwise my last week has again been quiet - on my feeder a Coal Tit has become semi regular and a poecile titvisited once but I only got on to it as it skitted off (was thinking the coal tit looked warm colored and then when it flew off it showed no white nape). Maybe next time. Had a Hobby over my parents garden attacking hirundines which my parents have subsequently seen 4 or 5 times.
Also no baby although 3 hours in Hull Royal yesterday was dull. But thems the breaks. Peace out.
Posted by James at 20:43