The annual birdforum Yorks chapter embarkment of the good ship 'Yorkshire Belle' to do some spotting of Skuas Shearwaters and the like was undertook yesterday. Attended by Graham (Bitterntwisted), Keith (Keith Dickinson), Paul (Doc Reed), Pete (Pete Mella), Marcus (Marcus Conway-eBirder), Mike (Skink1978), Jim (James Thomas), John (birdieboy123), Rob (Zatcatzooba), Michael (Birdflower) & Mark (Knocker7800), as well as my good self we had some form to live up to - Great Shearwater (2007) & Amur Falcon (2008). Thankfully this was easily achieved with many delightful spots.
I decided upon and early and slightly fruitless start at Old Fall on Flamborough Head where a large gull flock contained nothing unusual and interest was maintained by overhead Snipe, Grey Wagtail plus Kestrel and Chiffchaff in the plantation itself. My malaise was broken by a text from Marcus which told me id started in the wrong place - Barred Warbler in Bay Brambles, a self find for him. Nice (i didnt tell him it was surely just the bird from two days ago :) ).
Too late to take a peek, I headed for the harbour to see millions of birders milling. There was only one thing for it a McMultiNationalConglomerate breakfast. Boarding the boat i noted a lack of seats and was stuck with suboptimal viewing - how dare they? The Great Shearwater finder an all that... I'd show 'em. 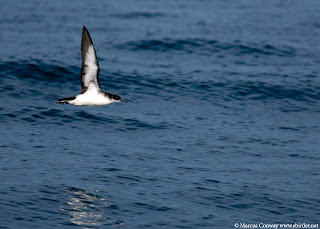 The journey out of the harbour was uneventful in the least as a couple of Sarnie Terns livened up procedings. A brief Arctic Skua was seen by a few. A string of very distant shearwaters was led by what I felt to be a Balearic but it was too distant to be sure. It had the jizz of a Manxie rather than the leaden flight action of a sooty but didnt flash white as it banked. It was at a very long distance, perhaps over a mile (the sea was very flat) and partially silhouetted so a probable is all it can be. Little was happening save a string of Teal which passed over the boat. Several more Manxies went past including a very close individual giving my best ever views of this species. A Bonxie gave some unsatisfactory views.
My attention was waning with Porpoise and Grey Seal providing the most interest then suddenly, BLAMMO...I spot a whale spout, very thin and high (10 foot or so) and I notify everyone with my foghorn voice. A couple of others get onto another blow this time a little bushier. The whale just seems to sink but it was very dark coloured. Initially everyone celebrates a Minke but Marcus has reservations. He didnt see this beast but he has seen Minke before and he said there blows are low and bushy and perhaps it is something else. A postscript to this is that a Humpback was seen today from the seawatch and also breaching and it seems this is the species involved as the blow fits the desription. Delighted! 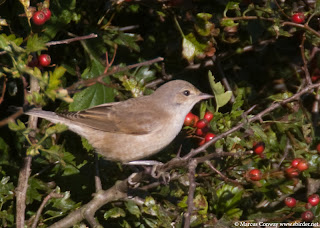 Nothing much else is seen on the cruise but after a reinvigorating battered offal in the shape of a penis and woefully anaemic fried carbohydrate storing tubers we hit the head. South Landing had some limitations in terms of birds. There werent any. Actually thats a slight lie - one Pied Fly (not seen by me), one Treecreeper (not seen by me), one Whimbrel, one Bar-tailed Godwit and TWO Dunlin were our rewards. Slightly more enticing was the Barred Warbler that was showing itself in Bay Brambles (which means Marcus wasnt lying, rats). We quickly arrived at the Head en masse to the showest Barred Warbler EVER. Included is a 'record shot' by Marcus and a proper record shot by myself in which it transforms into a Whitethroat. The only way I am sure they are the same bird is the undertail barring although to be fair that might be photographic effect on my effort. Also a new latest Swift record was overhead plus a Whinchat on the brambles. 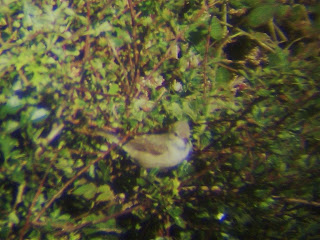 Leaving Marcus to acquire some nice shots of the warbler we left and hit old fall for little return. As we went to walk on Marcus phoned a report of an Osprey through - and Paul picked it up as it sailed overhead. Views were prolonged as the bird decided where to go once it hit the south edge of the cape before it headed strongly in the direction of Hornsea. Not amazing views but a great bird. Walking around the stubble fields added Wheatear, Linnet and Stonechat.
A final assemblage at the car park led to nice views of Whinchat and Stonechat whilst Graham managed to get most of us onto 2 Bonxies headed north. We were 1/4 mile from the sea. Amazing spot. Several people headed to Filey but I five intrepid souls had a 15 minute seawatch which produced a flyover Greenshank, a mixed flock of Barwits, Whimbrel and Curlew plus a juv Arctic Skua. My first of the day.
Thanks to the aforementioned Mr Conway for the use of his pictures. Can you guess which are his?
Posted by James at 19:51

Is it the copyright at the bottom right of the pictures?

Do i win a prize?

you might be right but sadly there are no prizes (im affiliated, loosely*, with the bbc).