March is an excellent month for variety, especially of migrating waterfowl on NocMig and so it proved this year. My experiments of live listening last year yielded fine numbers of ducks and this time out I got no fewer than 29 species including three nocmig firsts for the garden, Whooper Swan, Shoveler and Common Gull. Early arrivals included a Chiffchaff and a Little Ringed Plover. 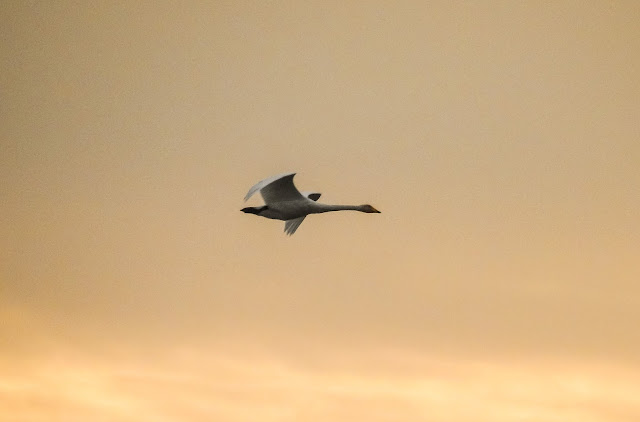 Lets start at the beginning, Week 1, and I recorded five out of seven nights. The 3rd was slow but a flock of Teal not long after setting up and an early Coot, the first of 16 in March, was good value. Gulls aren't regular here on NocMig although there are a pair of Herring Gulls that breed nearby. Two different birds passing were unusual though, constituting the first passage records for the garden with a third on 6th. Oystercatchers were first recorded on 4th and were recorded as migrants on 11 nights but it was evident towards the end of the month that the resident birds had returned with regular display so it was hard to tease out which records referred to these. Blackbird migration picked up with 17 birds across the month from the 4th-31st, up from five in January and February combined. Not huge numbers but movement nonetheless. The first record of Mallard on 5th March heralded the decamping from the Mere to the local ditches for some hanky panky and they have become a regular occurrence and will remain so well into the autumn. I'm sure I get some Mallard passage but making head nor tail of it is impossible. A single Chiffchaff flight call on 5th was a first NocMig record for me and heralded the almost immediate return of this species to the village with two or three territories now audible from the house. A Moorhen on 5th was the first of 19 recorded in March. March 6th held a Shelduck, the fourth garden record and third in a fortnight. Two Wigeon flocks were recorded on 7th and the first Redwing of the month, the first of 51 for the month and similar to Blackbird it was up from 11 records in January and February combined.

Week 2 was relatively unremarkable but Common Scoter passage commenced on 12th. I only recorded on two nights and my first Gadwall of the year on 12-13th was decent along with the first Curlew. A bit worrying is that there local birds I heard nightly last year dont seem to have returned although the second village pair, a bit further away are back. Week three took a while to get going with just the usuals (Redwing and Moorhen plus the resident corvids, owls and Mallards) plus a Grey Heron on 18th, the only record of the year so far, and a flock of Golden Plover on 19th which started a string of 11 records over the subsequent week. The final day of the week, the night of the 20-21st March was the first 'big' night of the year, with two flocks of Wigeon, four flocks of Teal (of 13 in the month), a flock of Common Scoter, three Moorhens, two Coots, two flocks of Oystercatchers, a flock of Curlew and two records each of Redwing and Blackbird. And to think this was just the warm up!

The final decade of the month was electric and whilst we have touched upon the Scoter in the previous post it was incredible for this species. 19 flocks of Common Scoter went over on 21st-22nd plus four Moorhens, five Coots, Oystercatchers, two flocks of Golden Plover, two flocks of Curlew, three Black-headed Gulls and my first NocMig Common Gull. A busy night! Scoters were replaced by my first garden Whooper Swans on 22-23rd when two herds flew over. A third group followed the next night. More of the commoner migrants on 22nd were supplemented by my first Little Ringed Plover of the year just after 8pm. The first Water Rail of the year flew over on 24th, one of three in the last few days of the month. I only missed a single night, 28-29th March in the final 13 nights and each night was brim full of interest. One of just two Song Thrush passed on 24th and on 24-25th there was another big movement of Scoter in addition to the first Greylag Geese of the year. There are a pair breeding about 1km from home and I think these must be the birds I have picked up on occasion since then. A minimum of two Shoveler went over the same night and these are my first NocMig record, and an odd sounding duck for sure. Oddly I have a late spring visual record from the garden and I have seen them in flight during the day down the road at Wansford so perhaps they are passing over silently more often? Needless to say each night had Golden Plovers and Oystercatchers and Redwing and Scoter(!) plus a selection of rallids. A Little Grebe flying over giving the rarer 'scream' call as opposed to the Whimbrel impersonation was the first of the year on 27th March. It was a species it took until May to pick up last year so perhaps isnt too common in early spring round here. I'm going to gloss over the last three nights of the month but they too were full of birds moving, just nothing new or in outstanding numbers. So there we have it, lockdown birding at its best and while I slept. It was exceptional and exceptional fun each day working through it.