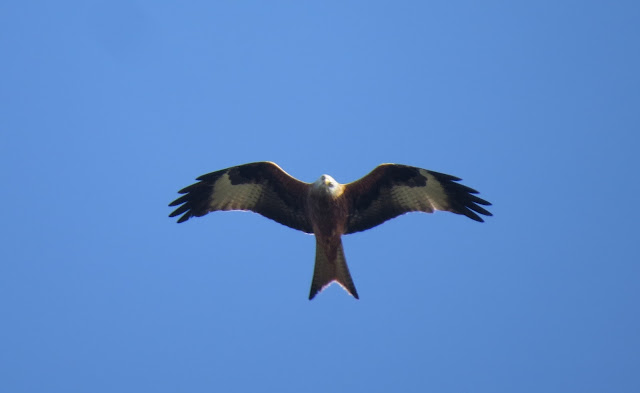 I decided to head back to Flamborough for a better look at the Raven as it had been showing well around Flatmere. On arriving I bumped into Gerard who patches Fraisthorpe and Barmston as well as coming onto the head. We set up at Old Fall steps and before too long were seeing birds. Initially it was Buzzards over Danes Dyke with up to three birds present. The Raven then flew into Flatmere pool and hid. Whilst waiting for it to reappear I noticed the feral Greylag flock close to the village and there was a single Barnacle Goose amongst them. I went back to checking the Buzzards only for one to morph into a Red Kite. This then toured most of the head before going over North Landing where it attracted the attention of the Raven. 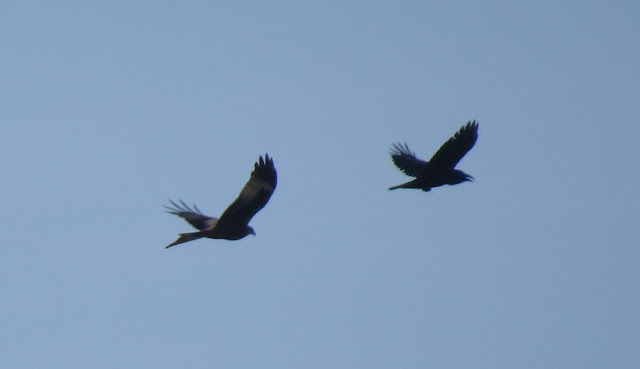 The two birds then headed straight for us and onward to Old Fall where they circled together before they split, the Raven heading north and the Kite slipping south towards Sewerby. Four Grey Herons were seen at North Marsh before Andy Lassey flushed them by approaching too close. He repeated the trick later flushing them from a field to Flatmere. Apparently this is the March record so its all going quite nicely! The goose hid with the flock behind a hump in the field when Brett came looking and he was also too late for the kite. A calling Bullfinch was new for the year as was a Sparrowhawk which spiralled up over middle Dykes. The three Buzzards spent most of the morning mooching about between the village and the dykes.

I mosied off to South Landing where I had very little aside from a Coal Tit at Highcliffe Manor. No Woodcock or Long-tailed Duck but all round a successful morning.