Today was headlined by my first decent find of the year up at Flamborough - a Raven. This monster corvid is rare as hens teeth on the Yorkshire coast although this is the second record in two years at Flamborough. I am led to believe there are just a handful of other records from the site. I was walking up to North Dykes hoping for the Hoodie or some Golden Plover in a field when amongst a monster flock of Rook I heard 'kronk kronk'. It sounded like Raven but the cynical bit of my brain cut in and said it'll just be Rooks doing impressions. I scanned to see a giant corvid slinking over the field being escorted by two Carrion Crows. In the mist it wasn't a great view but with the call I put it out on the local grapevine and on twitter. Despite living in a Raven desert I am fortunate enough to see and hear these impressive beasts on a weekly basis in Somerset, Northumberland and Scotland but it was the juxtaposition that had me on the hop.

After this I failed to reconnect but I got the word out and the regulars were scouring the head and it was heard not long after I left by Phil C before being found on the deck at Flatmere. All and sundry were then able to twitch it including Andy Hood who was stuck at work initially but got away just in time. Big thanks to him for letting me use his photos. I didnt have my camera on me as it was drizzling pretty much the whole time I was out and about. 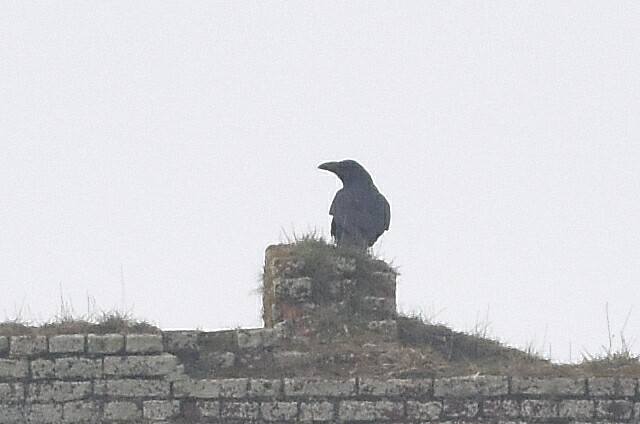 Aside from 'da bigg crow' there was what felt like a quiet seawatch but it had small numbers of wildfowl moving of 7 species including 2 Gadwall, 1 Dark-bellied Brent and a Goosander which were year ticks at Flam. A couple of Dunlin south were also new as were the plethora of Puffins bimbling about and a couple of Lesser Black-backed Gulls. Rather more embarrassingly were tonnes of Meadow Pipits which were displaying everywhere. A trip to Thornwick Pools produced nothing of note as the regulars including the Pochard were all present and correct.
Posted by James at 20:50