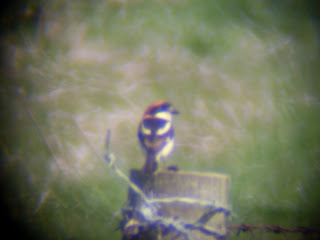 Yesterday I had another vagrant from southern Europe, this time a nice male Woodchat Shrike. Again a very obliging bird but a bit of a hit and run for me (was still late for work). This time it was by canal scrape, Spurn point. Had several in Spain last month but they taste sweeter in Yorkshire!
Posted by James at 21:02