Scorching in the Sierras - Part 1


Last summer my family and I decamped to the Sierra de Grazalema for a fortnight. I was recuperating from my last DVT (We will get onto the latest one shortly I'm sure) and I hadn't been birding all spring. I have since learned that I was also suffering from undiagnosed gout in my knees. I'd had a tricky few months so a couple of weeks resting in an Andalusian villa with the potential for a trip of two to Tarifa sounded like my idea of bliss. Little did I know how good it was going to be. We had a straight forward flight into Malaga and picked up the hire car before pointing North-west to El Gastor, just over the border into Cadiz from Ronda. We arrived in good time to a spectacular setting, nestled in the mountains. It was overcast but superhot. European record temperatures were falling in Italy with 49c recorded there. We made do with a measly 47c. It was 42-47 degrees for the first four days before settling back into the mid-30s. This is generally the hottest part of Europe but those first few days were crackers and sleeping was very hard. Birds would come and drink from the pool whilst we were in it, they were so desperate. In addition there was a levante wind which stifled migration. We arrived in El Gastor, one of the 'Pueblos Blancos' of Andalucia, mid-afternoon and there was a flotilla of Griffon Vultures soaring overhead. I had heard that 'hawks and eagles' were seen every day from the deck of the villa so I assumed there was a vulture colony nearby, and this was proved correct with a cliff holding seventy odd birds and additional colonies across the valley, the other side of El Gastor and at Zahara de la Sierra. 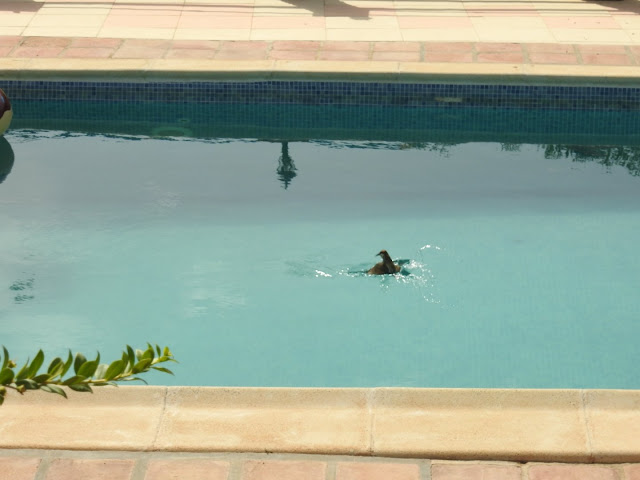 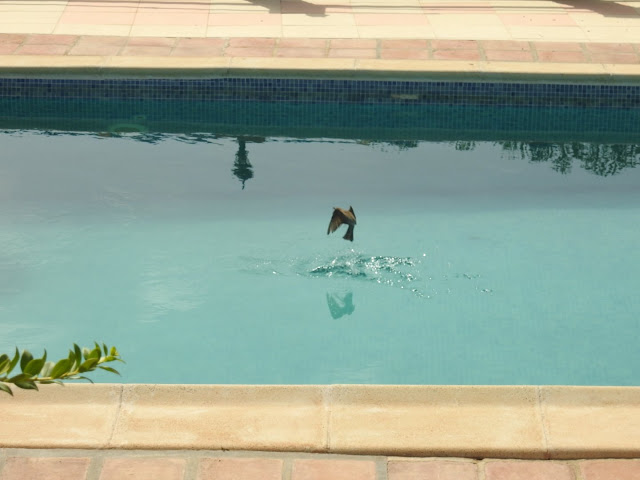 The first afternoon revealed about 50 Griffons and a pair of Booted Eagles, one dark and one pale morph. These guys were nesting about a mile from where we were staying and were seen on a daily basis. The male was a pale morph and regularly hunted the slope the villa was on whereas the female, a dark morph, was more seldom seen and tended to stay the other side of the mountain. Both were often seen early moring when they joined the kettling Griffons. There was no sign of any young birds and they would have been dependent when we were there so I assume they failed. Late in the afternoon, a pair of Red-billed Chough floated over the vulture cliff, and were a familiar if irregular sight with a high count of 25 birds seen from the villa. The only passage recorded in the afternoon was over a hundred Bee-eaters, a single Red-rumped Swallow and a handful of Pallid Swifts. Other typically Mediterranean species recorded in the villas garden included Hoopoe which was seen occasionally but they were far from regular and Serin which bred in trees just outside the garden.

I was tired but excited the following morning, expecting epic migration but the weather soon cooled my ardour. There was no raptor migration and aside from the previous days Booted Eagles and Griffon Vultures, a single Common Kestrel  was the only additional raptor recorded. NocMig was a bust as I had cocked up the settings on my recorder unnoticed to myself, in an attempt to record myself playing guitar. I didn't notice until long after the trip. There was a bit more success with Common Swifts as a flock of 200 went through in the evening which were joined by a handful of Pallid Swifts. A flock of 10 Alpine Swifts were seen over the mountain mid-morning. The Bee-eater count was a paltry 22 birds and there were braces of Swallow and House Martin which are likely to have been local birds rather than migrants. Singles of Western Bonelli's Warbler and Spotted Flycatcher moved through the garden in the morning, both avoiding photographs, but a family party of Sardinian Warblers were a bit more forthcoming. A single Spotless Starling was a harbinger for quite a large flock which roamed the wider area.

Things started to get a bit samey by day 3 which was Friday 13th August so I went to Llanos de Libar, a beautiful valley between the villa and Ronda, located high in the mountains and which acts as a pass for raptors through the High Sierras. It was still scorchio but I arrived early morning, to see a Bonelli's Eagle flop across the valley. I had poor, non-optics views from the moving car but enjoyed reacquainting with this spectacular species. Raptor-wise, again the heat stifled movement but a large flock of 80 Griffons were entertaining and a single pale-morph Booted Eagle hunted the valley. There was a bit more variety on the passerine front with Black Wheatear and Thekla Lark singing from amongst the boulders. I also recorded my first Crag Martins, Black Redstarts and a single Rock Bunting. By 10am I was parched and the heat was unbearable. Moving back to my beer addled sunbed, I added my first Goldfinches of the trip. Migration was steady with just the aerial insectivores moving at all but a single Alpine Swift was in with a group of 14 Common Swifts. There were also singles of Swallow, Red-rumped Swallow and House Martin and a mighty 81 Bee-eaters. A single falcon species was seen. It was in all likelihood a Hobby but I didn't seen it well enough to be sure.
Saturday was more of the same with a high flock of 200 swallow species along with 16 Swallows and 25 Red-rumped Swallows recorded along with a brace of Bee-eaters. My first hint of raptor migration was a singular Black Kite which was new for the trip. I was enjoying the location but just starting to go a little stir crazy with the lack of movement. Migration started properly on day 5, Sunday 15th August, with five Short-toed Eagles moving over the deck, in addition to 1 migrant Booted Eagle (and the resident two birds) and my first Sparrowhawk of the trip. A selection of aerial insectivores passed overhead consisting of 66 Common Swifts, 1 Pallid Swift, 7 Alpine Swifts, 41 Bee-eaters, 17 Red-rumped Swallows, 7 Swallows, 6 House Martins and my first Sand Martin of the trip. It was the hottest day and the local Collared Doves, parties of Bee-eaters and Red-rumped Swallows all came and joined me in the pool for a drink, obviously desperate in the heat of the day. Hopefully they were sustained. My first Stonechat of the trip moved through the garden early in the morning.

I had been studying the weather and I knew that Monday heralded a change from levante to poniente and a hunch suggested this might be good for movement at Tarifa. I had been keeping an eye on passage totals for the past few days and they were paltry but numbers of Black Kite were building up in the Strait. I was unsure on the best approach, so got in touch with the Inglorious Bustards who offered to guide me for the day. Knowing I didnt want to waste time, being in the wrong place, I gladly accepted and after an early morning drive down to Lidl met Simon and Niki whilst the kites were amassing overhead in the gloaming. After a brief caffeine stop, where we added Western Bonelli's and Cetti's Warbler, we moved to a private watchpoint. Hundreds of grounded Black kites were visible in every field with dozens on each pylon. Simon picked a Marsh Harrier sat amongst the kites. A Bottlenose Dolphin was spotted by Niki out in the straight as it moved east. The spectacle began slowly, with a single male Montagu's Harrier followed by a female not long after, and then a Honey Buzzard, low over the water and off towards Jebel Musa. The view was incredible and as the light came up, Morocco felt within touching distance. A flock of 39 Flamingos flew west with purpose from Gibraltar towards Tarifa before crossing over to Africa in the haze of the early morning.

The kites on the ground started to move about with a handful, followed by a dozen and then a couple of hundred. Numbers kept increasing until the sky was dark with raptors. Several hundred White Storks woke from their slumber, in fields inland and joined the throng. It was getting pretty busy. A dark morph Eleanora's Falcon scythed through the air towards Tarifa Island, presumably to cross at a lower altitude. It was brief but unmistakeable and pleasingly, I had picked it out. At the same time Tawny Pipits were calling round us and handfuls of Pallid Swifts and Bee-eaters zipped over our vantage point and out into the straight. The dam was about to burst. A Nightingale and an Iberian Chiffchaff distracted us briefly as they moved between bushes round us. By the time a third Honey Buzzard was headed out over the Strait, the pattern was full. Kites drifted backwards and forwards, thousands swirling in the breeze. The wind changed and there was a push and the door opened. A constant stream of raptors moving from all directions, towards us and then on to Tarifa Island and out over the sea, aided by the winds. The White Storks were less convinced, trying and failing to cross on several occasions, getting halfway out and coming back. They too eventually plucked up the courage to move and crossed in big numbers. As the stream hit full tilt, the first Short-toed and Booted Eagles started to move through. Montagu's Harriers and Lesser Kestrels would pass over the fields on occasion to alter the flow.

A crescendo was reached when a kettle of Storks went overhead and feathers were seen falling from the flock. Simon mentioned that local young Bonelli's Eagles often creep into the flocks of kites and attack storks and bang, there was a tawny coloured young bird which had a swipe at one of the storks. It was lost in the morass and I turned my attention to a kettle of Black Kites moments later. I had a falcon. I had a FALCON AND IT WAS PALE! I started to explete and implore the others to get on it, aware they had a juvenile Lanner Falcon the day before. Remarkably, this was a Lanner Falcon but a much less vibrant bird, missing the chestnut crown of the previous bird. Lanner Falcon is a Spanish rarity and almost all the accepted records come from the Strait where they are pretty much annual. A cull of records has seen the official total tumble from 80 odd to 27 or so. I had managed to find a bona fide Spanish rarity at Tarifa. It was seen well by all who were present, including a couple of Spanish Operacion Migres volunteers, who were mighty chuffed. No sooner had I lost the falcon than a Black-winged Kite whooshed through at ankle height and off south-east towards Africa. This truly was a day of days. By midday numbers started to slow and diversity lowered but still we had seen 18,425 Black Kites, 4556 White Storks, 24 Booted Eagles, 17 Short-toed Eagles, 9 Montagu's Harriers, 8 Griffon Vultures, 5 Lesser Kestrels, 3 Honey Buzzards, 1 Marsh Harrier, 1 Bonelli's Eagle, 1 Eleanora's Falcon, 1 Common Kestrel, 1 Lanner Falcon and 1 Black-winged Kite heading to Africa. It was incredible. 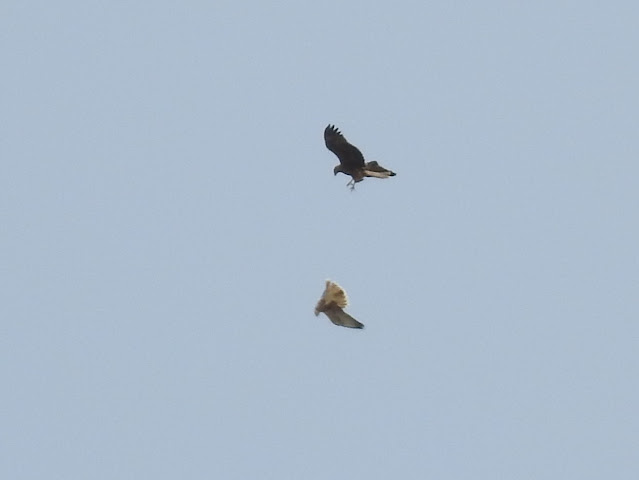 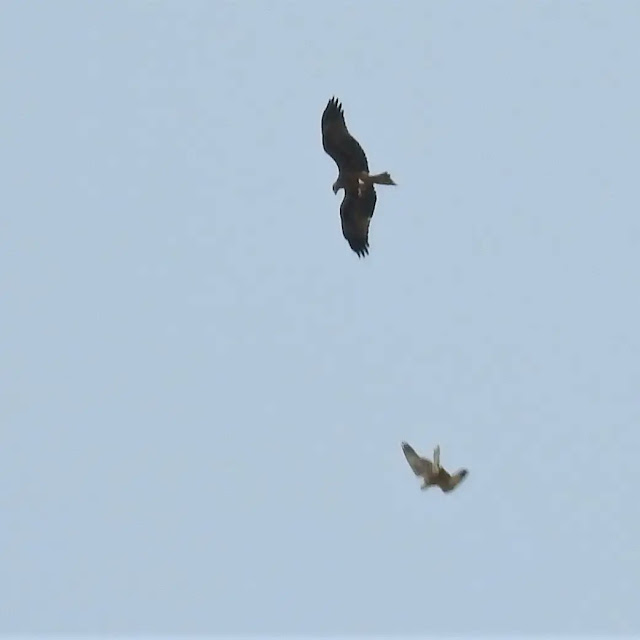 Part two with the afternoon from Tarifa, Whale watching in the Straits, climbing Tajo Lagarin and raptor migration from the pool to follow.
Posted by James at 13:46