Happy Early Birthday to Me

I have another (!?!) hobby. This one is the final fulfillment of a latent desire to get involved. I am currently rocking a new Heath Trap with a 12w actinic. A small moth trap. This is a neighbour friendly job and one that will hopefully get me involved properly in a hobby that I have been looking at for years. 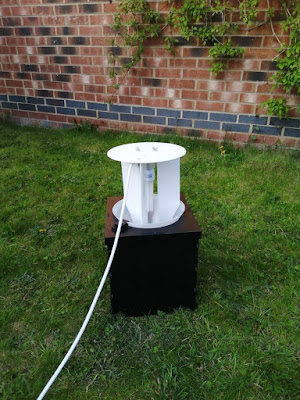 My lovely wife decided that rather than wrap it and give it to me on my birthday, I could have a run straight away. It was cool and still but come the morning I was excited to see what I had caught. I managed 7 moths of two species, hardly earth shattering but as I have only trapped in the late summer both were new. Six Hebrew Characters and one Common Quaker, both names that I recognise and now in the trap. Hebrew Character is easy enough to identify but Common Quaker is similar to a number of other species which fly at the same time so that took a bit of bookwork. There were a couple of midges but no other bycatch. I didn't trap the following night as it was cooler and windy. I redeployed the trap on the 18th and blanked so it went back out the following night. There were four moths on 19th with three Hebrew Characters and my first Early Grey. Last night I trapped again and managed two moths, both Hebrew Characters. I am looking forward to a bit more diversity as we move on.