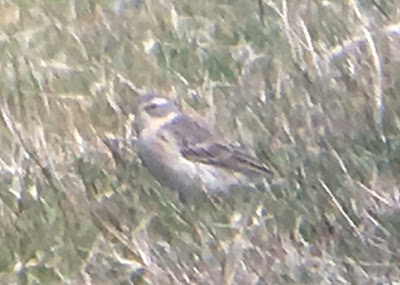 Like most birders I love a trip to Spurn. Despite my relative proximity I dont get there as often as I'd like. I have managed two trips in the last nine days. The first, for my 37th birthday no less was on Good Friday. I spent the entire time at Numpties and it was great. Hirundines were streaming south in reasonable numbers with 3 figure totals for both Sand Martin and Swallow plus a ringtail Hen Harrier went south and three Whimbrel north which were my first of the year. Ten Arctic Terns headed east out of the Estuary for another year tick. Four Wheatears scampered around Clubleys Field and a Hooded Crow blogged about. A handful of flava and alba wagtails south harboured at least two White Wagtails. Tardy Redwing and Fieldfare were great to see as was a female Brambling that wheezed its way past. The highlight of the visit was a surprise breeding plumage Water Pipit which pitched into Clubleys as I was thinking about packing up. I failed to get a photo and was on my own without my radio. It slunk out of site and I assumed it would walk back over the shallow brow in the grass but after 30 minutes I'd given up. I was walking back to the car when it picked up out of some reeds onto a bund. I managed to rattle off a few phone scoped pics before I headed off.

After yesterdays Black Kite at Spurn and the Alpine Swift at Flamborough I was optimistic for this morning at Spurn. Initial promise fizzled out but I still managed to catch up with a few decent bits and pieces including a 2CY Spoonbill heading south at half 6 and a 3CY Red Kite which blogged about, both of which were Spurn ticks for me. A little movement over the sea included 3 Manx Shearwaters and 4 Sandwich Terns. A female Ring Ouzel pitched onto a bush by the warren briefly and I was leaving a Marsh Harrier was briefly strung as a Black Kite. Alas it was not to be. A single Whimbrel went north on the sea and there was a steady stream of Yellow wagtails south. Cool winds and rain seemed to stop any movement and only a handful of swallows passed whilst three House Martins were hawking over the Kilnsea. A Tree Pipit alighted briefly on wires by the Warren and I managed a pants shot of it.