Those of you who follow me on twitter may have noticed I have been in self-imposed birding exile. I have been actively trying to lose weight since last September as I had got quite (very) fat. I had said that I wasn't allowed to go birding in the new year until I was 14 stone which when I set myself the challenge was a long way away. Thankfully here I am at 13st 12lb having dropped 25lb since September back on the birding wagon. Of course I can never truly stop birding as its my job so I imposed a no pay, no binoculars rule. Despite this I have got off to a reasonable start to my year, largely thanks to working on some wetlands in Somerset and a Red Kite over my head in the village whilst running which is my first here. Oh yeah - I'm running again!

I hit 14 stone (not entirely arbitrary - it meant I was no longer obese) at the beginning of February having dropped 11lbs since Christmas. Thus far I have been birding twice in Somerset and an outing to find Hawfinches in the churchyards of the Quantocks was not an overwhelming success but did see us find a very smart male Brambling coming into breeding plumage. Elsewhere on the Somerset levels I missed the Cattle Egrets and Glossy Ibis but did refind the Ferruginous Duck which had been missing for 4 days at Ham Wall and saw the Ring-necked Duck that was round the corner.

Despite the lack of birding I have found a county rarity already in the shape of a first winter Caspian Gull. I have seen a handful of Caspian Gulls including a couple in Yorkshire and found one previously at a location on Teesside but I couldn't submit it due to the nature of the site I was working on so it is nice to find one I could put out for local birders, a number of which connected as it was present for three days at the same point on the tide. It was 750m away from where I was watching so apologies for the crappy photos but it was about for 45 minutes which gave ample time to study it and make notes. I was also able to draw on web resources whilst looking at it to help me remember the features such as the plain coverts and thin white tipped median and greater coverts which is stuff I don't remember until it comes to actually identifying something in the field and it is sometimes a bit late then. Thankfully Gavin Haig has been getting back 'into' them and I find his the most accessible approach. 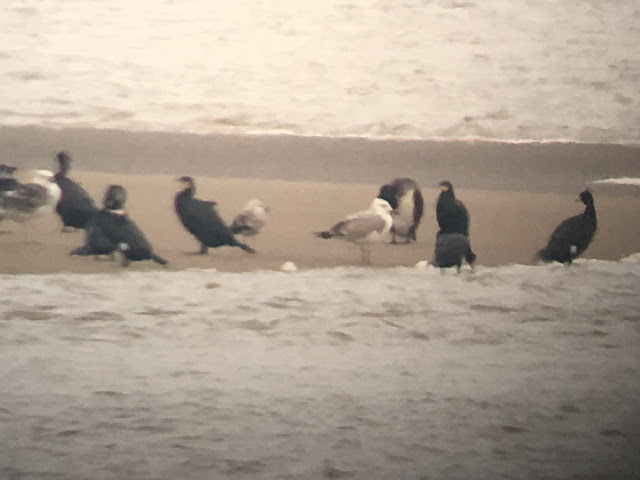 It came in with a couple of GBbG and whilst obviously lighter built it wasn't far off in size but was very attenuated and long-winged with very long legs and no tertial step. It was obviously clean white-headed and had a shawl. Interest piqued I made some detailed notes which along with my photos I made the sketch above when I got back to digs post survey. Thankfully it took time to preen and showed the white underwing and tail band. Andy Slade got on it from Burnham and he came to the same conclusion as me. Hopefully this will be accepted as the 4th for the River Parrett area. 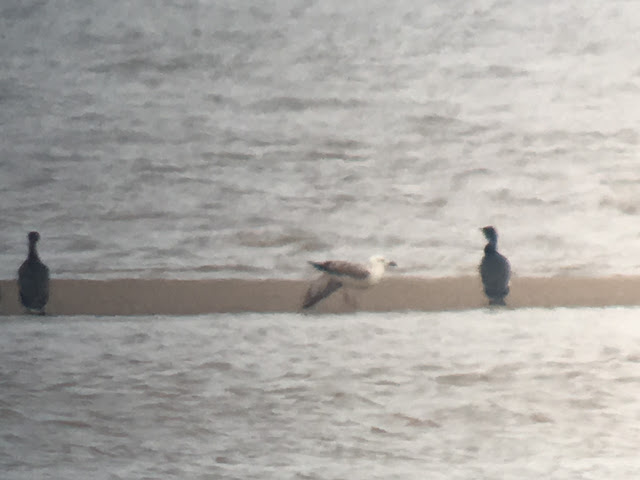 James, well done on both the lovely Caspian Gull and the weight-loss! Thank you for the mention, and I'm delighted that some of my Casp stuff was helpful.