I've just got back from another successful trip to Somerset where I finally managed to bump into some of the erupting Hawfinches. My encounter was in a churchyard in Bloomfield, west of Bridgwater. I had been hoping for an opportunity to arise close by as I had a couple of free afternoons post work and it duly presented itself. Lee and myself arrived to see the two Brians of Somerset birding on site but bereft of birds. Lee picked a big finch dropping down from one of the trees but it was lost until I espied it low down. After some kerfuffle we were all watching it. It moved up higher to a better position to view and was joined by a plethora of Greenfinches, Chaffinches and a couple of Brambling. 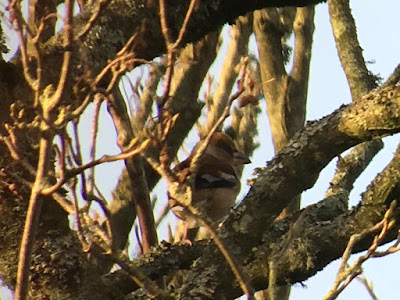 A bevy of 'pic pic' contact calls and a further three birds flew up to the Hornbeam after feeding unobtrusively in the Yew near us. The four birds showed nicely but as the sun lowered three moved off leaving just the original bird. Fantastic views and hopefully not the last I see this winter. On the Parrett there was the usual assortment of raptors and waders with some exceptional Peregrine and Merlin aerial combat against Avocets and Starlings respectively. I didn't see a kill despite long dogfights. Amongst the waders I also saw a single Great White Egret which still elicits a thrill when working away from the levels and a Spoonbill. It is the third year in succession that I have seen the latter in the same area which is excellent and hopefully a sign of their upturn in breeding success albeit not nearby. 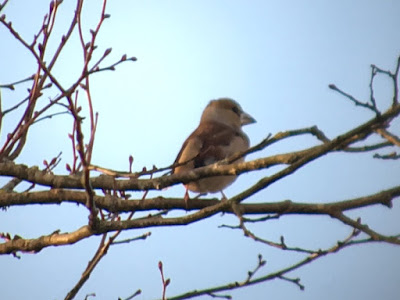 Today I headed to Flamborough for a brief seawatch and a look at Cattlemere which has been hosting some good stuff on the ploughed field. There was a decent turn-out despite the unfriendly conditions and watching from the sheltered and sunny area to the S of the normal position under the foghorn was reasonably warm. The birds were less thrilling mostly with a few Red-throated Divers doing little for the enthusiasm. A pair of Goosanders south were my second record of the year and as I was about to pack in 5 Whooper Swans came in high. These were a new bird for me at Flamborough so a real bonus.

Moving round to Cattlemere I quickly bumped into five of the six Shore Larks which have been about. They were sharing the field with an assortment of finches and at least 9 Snow Buntings. Photos were tricky as they were all in and out of the furrows so all I have were these of the snobs. 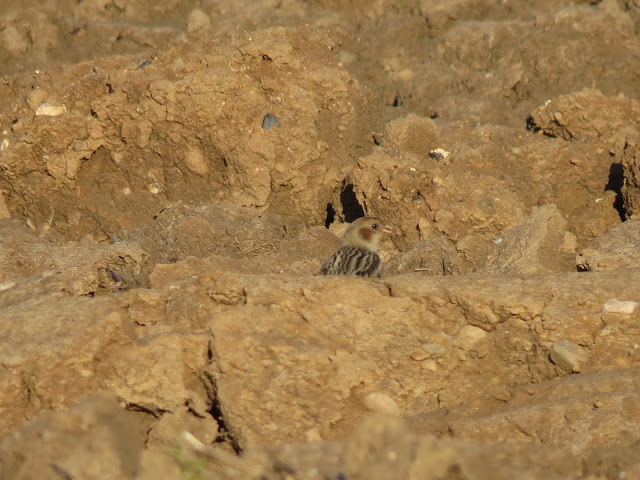