A thread on low hanging fruit on the Pan-species Listing facebook page had me opening my eyes for a couple of lichens and a couple of fungoid plant pathogens which are pretty easy to see. All I had seen before or so I thought but I couldnt remember where or when. These are things that are everywhere but easy to ignore. First up was Bracken Map which is a fungoid plant pathogen which occurs on Bracken and is easily seen on dead stems due to its near ubiquity. Sadly my first patch of Bracken was one of the few where it is absent but soon I had seen many patches of it including in the photo below. 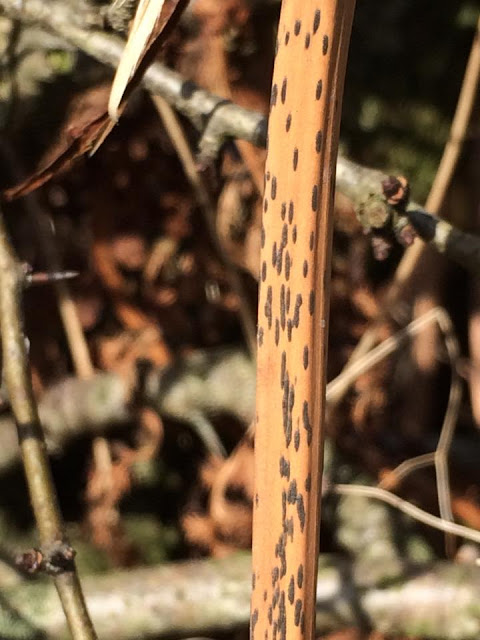 The other fungoid organism was a parasite of Rubus sp. and a quick look at the remaining leaves on a bramble (didnt look like typical Rubus fruticosus) saw some small circles with pale centres, Phragmidium violaceum.

The brace of lichens were both very straight forward and you will have seen them too. You know when it looks like there is chewing gum on the floor but its not a lichen. If it is circular then on every untrodden bit of path ever meet Lecanora muralis. And that greenish wash that appears on damp brickwork that never really resolves into anything. Thats Psilolechia lucida. Not the four most inspiring PSL ticks but like Pokemon, you have to catch them all. I quite like Bracken Map as well...
Posted by James at 21:03