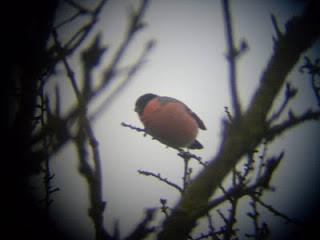 Just added my garden list to Bubo - turns out that the Yellowhammer last week was my 50th species recorded since May 2008. Highlights have included Barn Owl, regular Bullfinch in spring, Willow Warbler, Chiffchaff & Blackcap on blossom (or the insects on the blossom), Tawnys singing from roof, Cuckoo singing nearby (can 2011 be the 4th year in a row?), Stock Dove, Tree Sparrow, Grey Wagtail, GS Woodie, Siskin, Kestrel, Yellowhammer and a few other nice bits and pieces. Plenty of 'good' stuff for a garden. Have a feeling that I have seen a couple of other bits but cant remember - Yellow Wag, Meadow Pipit, Sand Martin, Tufted Duck are the ones I'm struggling with.

The birds I want - I quite fancy a Turtle Dove, calling from the reedbed, across the railway and Moorhen calling is possible as they both breed close-ish. A flyover raptor isn't out of the question (Buzzard, Marsh Harrier, Osprey & Hobby seem the most likely). Reed Bunting summer and winter on the sewage works as do Goldcrest although I lack a pine tree for the latter. A flyover Lesser-black Back must be a possibility. Waterfowl from the mere regularly bomb about so there are a few potential additions there with Tufty and Gadwall chief amongst them. Lapwing breed across the road so if I listen hard I am sure I will get some in spring.

What have I missed? Tophill Low regularly gets raptors passing over - Osprey's and Marsh Harriers. The one that may have passed overhead was the White-tailed Eagle in 2009. I also missed the Wansford White Stork of 2008. Nightmare eh!

Best keep looking, although I think lots of skywatching will be needed to get to 100.
Posted by James at 01:09