Seeing as my actual birding experience currently is limited (work, children, wife, darkness etc) I thought I'd share a memory or two with you, my loyal readership. Now I am a very recent convert to this hobby after eing 'interested' most of my life. In May 2004 I stumbled across a Little Owl roosting on my parents land and this allayed with various other species that I encountered there set me off birding and the following month I joined birdforum which for its sins has helped. A lot.

My skills improved rapidly as did my life list with visits to flagship reserves and the like. Exotics like Green Sandpiper, Curlew Sandpiper, Spotted Redshank & Black-tailed Godwit were added. By the beginning of October I was regretting not going to see the territorial male rosefinch in Humanby (it seemed a long way to justify travelling from York - if only I knew!). A new website, Birdguides, was starting to show interesting birds which were maybe within the reach of a beginner and so I decided at the very beginning of October to twitch the Baird's Sandpiper at Flamborough head.

This proved an inspired decision as I dont believe there has been one in Yorks since (not an easy one at any rate). I drove all the way to South Landing and saw a small group of birders on the beach so I clomped over. First lesson in twitching etiquette was soon learned. Know your place! As a rank beginner I was made to stand at the back and got shushed regularly as a group of waders came up to us. They were Sanderling so I was told at the time (I only ticked Knot off 2 months later) and amongst them was a funny shaped bird which looked the same but not to my untrained eye. I was told this was the bird. Wow! Tick. 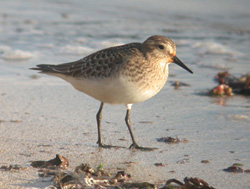 In the next edition we look at my first mega.

I like this, it sounds very familiar to lots of birders I am sure.