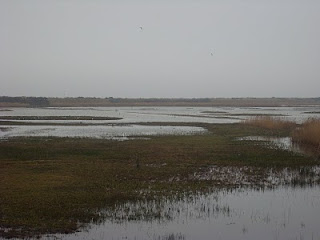 I cant remember the last time I managed 4 lifers in a day. Well actually I can - on Mull 2 years ago nearly (Hooded Crow, Black Guille, WT Eagle & Corncrake). Well today was a good day. I needed to blow off some steam as my dad has been pretty sick after his chemo. I left at half 5 little knowing Id slept through the devil child doing her Exorcist impressions. A Jay overflew the A14 as I got stuck in Cambridges rush hour just after 8. After sitting in traffic for 30 mins I gave into my stomach and bladder and visited the services.

After McDo'ing my issues I pushed on (slowly) to the suffolk coast. I arrived on site just after half 10 and meandered to the viewing area. Thank god I didnt go any slower! I got distant views of the Lesser Kestrel for under five minutes but got as good a look as anyone else. The rain duly arrived and the bird bugged out to seek shelter in the pines. After 20 minutes it was evident it wasnt coming back for a bit so I decided to try Minsmere for a bit until the Kestrel showed again. This was the first time Id been to this birding mecca and the ball and chain had given me strict time deadlines. I whizzed around the scrapes and got very lucky. As I walked about Chiffchaffs sung their hearts out and Green Woodpeckers yaffled unseen. Entering the North Hide I was struck by the sheer number of birds on the scrapes. Dunlin, Turnstone, Redshank, Bar-tailed Godwit (in summer dress no less) and gulls aplenty. A pair of Mediterranean Gulls displayed and copulated and whilst looking I noticed a couple of knots of these attractive gulls with at least 10 individuals about. A Swallow flitted across, a first for the year and the first time this has beat Sand Martin on to the year list. A Ruff pottered and a Spotted Redshank did elegant in my favourite Coot lovers parlance. 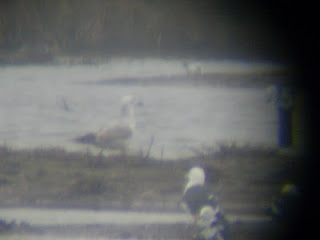 A quick scan of the gulls revealed a few Lesser Black-backs, a probable Yellow-legged Gull (it was sat down with its head under a wing) along with the Herrings and Great Black-backs. Avocets were everywhere. One of the other guys in the hide seemed interested in one of the gulls and I had a hunch he was on a caspo. Since I dipped the Caspian Gull at Potteric twice last year I was eager to connect and he kindly put me onto a classic 2nd calender year bird. It was huge with a beady eye on a pear shaped head, long legs, a parallel sided bill, long primaries and its centre of balance was behind the hips. It even did the diagnostic call thing and flew round showing its long wings. It bullied all the other gulls and was busy exploring plastic before bothering the now definite Yellow-legged Gull which moved out of the way (this must have been an adult female as it was much smaller than the caspo). I decided to move round to East hide to get a better look and en route heard some Willow Warbler subsong with no sighting. Nevermind. At least 4 Cetti's called en route.

The caspo had scarpered when I got round and so I had a better look at the Yellow-leg before being suprised by a close Cetti's Warbler. This then shot between two clumps of reed giving good flight views. A re-ticking at last. I received a call from Ange telling me I must return as the little shit had been a little shit. Or words to that effect.
I decided on a slight reroute that would give me a chance to take in the the roosting (and rightly so) Alpine Swifts in Lowestoft. I decided against the option of trying for the Kessingland Pallid Swift as I saw the Seaforth bird last year and have seen gabillions in Spain. Arriving at Lowestoft I quickly found the birds which were huddled under the eaves and looked like a pair of dog turds pinned to the wall. They didnt show an inch of white which is disappointing and whilst I couldnt have got closer views I sincerely wish they were better. I pushed on so as not to take the piss out of my beleagured spouse and was home armed with Pinot Grigio before dark with a big smile on my face and bags under my eyes. What a magic day. Whoever claims twitching is pressure ridden crap obviously doesnt do it right. I was relaxed and saw all I wanted, re broke 300 and got very lucky.
PS now UK list = 303
Posted by James at 21:13

That sounds like a good long list. Like your style mucho but Pino Grigio is pushing the boat out and spoiling it for everyone. What's wrong with a bottle of cider?

I apologise - am supping Bulmers this evening as penance. Long list - not really but im chuffed to have finally overcome 300 as I cleansed my list of any slightly crap views a couple of months ago. Only 97 to go for 400.