Escape to the Country (Park)

As I have been snowed under with my newborn daughter things life-related and specifically bird related have taken somewhat a back seat. This morning I was given permission to join Filey ringing group at the commencement of their ringing week.
An early start saw a soaking wet male Merlin puffed up near the Dotterel pub, Reighton looking thoroughly miserable. Probably wondering if Norway was drier.
I arrived at Filey CP just after 8 and there were already two birds to ring. Sadly I got the male chaffinch whilst the potential ringing tick of a 3F Brambling was taken by somebody else. Not long after my trainer, Graham arrived with his family en masse. 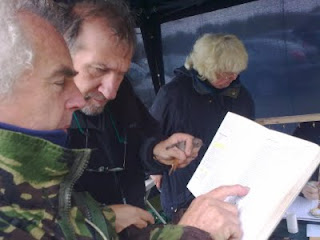 We were quickly into the rounds as vizmig kicked off. Large numbers of Redwing, Song Thrush and Blackbird poured overhead with a distant Jay a site tick for several people (not me as i failed to get onto it). The first round brought in many blackbirds and gold/greenfinches. The star bird of the round was a 1st winter Black Redstart - a year tick for me but sadly I was not the only person who needed this as a ringing tick. I did get the Brambling ringing tick I'd hoped for with a very white rumped 3 female. 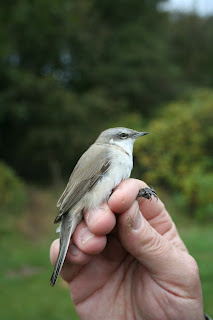 Another round produced a sandy, concolourous Lesser Whitethroat which biometrics showed as a probable halimodendri - aka Steppe Lesser Whitethroat. A super little bird which stayed high in the canopy - a good sign along with its stronger bill that it wasn't minula.
Reports of a Yellow-browed Warbler knocking about raised expectation and a Ring Ouzel overflew with Blackbirds chacking away. A nice year tick. Sadly I had to disappear fairly rapidly as lunchtime approached. A Redwing hit the nets but again another ringer needed this as a tick. I got really into the ageing and sexing of Greenfinches and blackbirds and some proper good birds were seen. 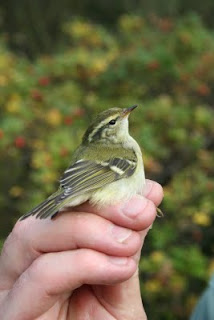 As a postscript I got a mildly gripping text from Graham saying that the YB Warbler had been trapped in the afternoon with a photo duly emailed. Doh. Hopefully heading down on Tuesday morning all being well.
p.p.s. Heres a gratuitous photo of my daughter. 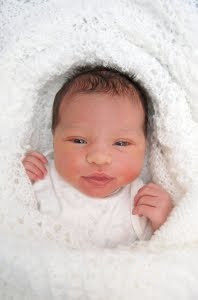 Sounds like you had a good morning, must be great to be part of the ringing process.

Your daughter is beautiful I would be posting gratuitous shots if it was me too!